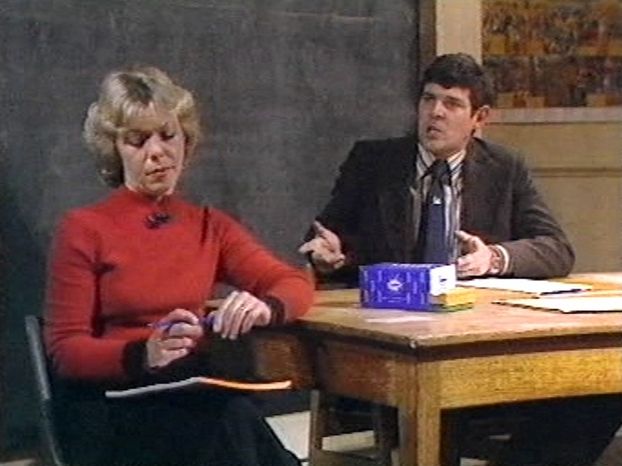 Cutbacks are the main topic of this episode.  The school has a lack of textbooks, they only have one computer (which is a terminal they have to share with other organisations) and some lessons can’t be taught because they haven’t replaced departed teachers.

Mr Keating decides that their remaining maths textbooks will have to be shared one between two pupils.  Although I have to confess that when it’s later revealed that they only cost about £1.50 it’s hard to imagine that they couldn’t find a little extra money to buy a few more copies.  But maybe that price isn’t correct (it was only an offhand comment from Stewpot) as that does seem very cheap, even for 1982.

Gripper’s once again on hand to make a little money as he decides to steal textbooks from St Mary’s schoolgirls.  He and Denny waylay them on a railway bridge and threaten to throw the girls over if they don’t comply.  The reactions from the girls vary – some are clearly frightened, whilst others are only too glad to hand over the books.  Gripper then passes them over to an obviously reluctant Pogo to sell.

The computer issue is slightly puzzling.  In previous years the school seemed to have a number of computers, but now we’re told that they only have one.  1982 would have been around the time when computers really started to feature in schools, so it doesn’t seem credible that a place as large as Grange Hill wouldn’t be better equipped.  It also seems to be rather primitive, since it sports a very small screen.  I remember using computers in 1982 and they weren’t quite as basic as that!

The school has the opportunity to buy another computer, for a bargain price of twelve hundred pounds, and everybody rushes to raise money.  When they fall a little short of their target Mrs McClusky elects to use the cash to buy textbooks instead (this is supported by most of the PTA).  Needless to say this doesn’t go down well with the pupils and it also isn’t welcomed by Stewpot’s father, who’s the current chairman of the PTA.

Mr Stewart is something of a  political firebrand and is keen to make his point.  “Look, we’re in a situation here where education is supposed to be free for everyone, right? And yet the more I hear about this school at the moment the more I realise that principal’s being eaten away. I mean you’ve got no Spanish specialist, you’re a metalwork teacher short and now you say you’ve got no books!”  When others suggest that they club together to buy new books he reacts with disgust, observing that if they subsidise the local authority, then they’ll simply be doing so for evermore.

The irony is that whilst education should be free, they do end up using their own money (raised for the computer) to buy the books.  It’s easy to sympathise with Mr Stewart’s opinion that this is a slippery slope and could encourage the education authority to cut back even further in the future, but Mrs Scott also has a point when she says that the children can’t be deprived of books, especially on a point of political principal.  The political subtext of the episode is fairly light, but it’s certainly there and might very well have struck a chord with any adults who had been watching with their children.