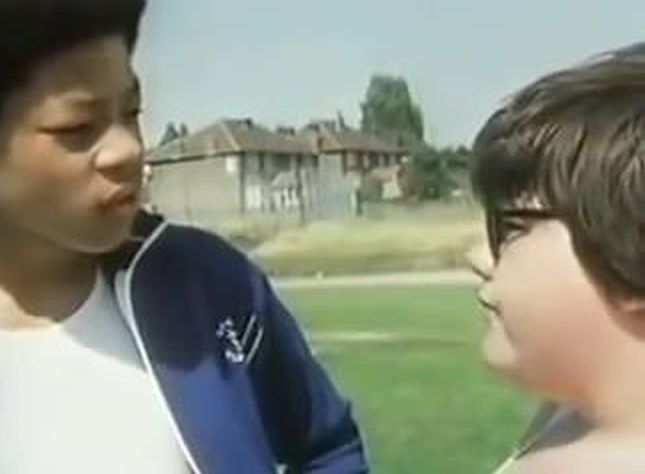 Roland continues to be an outsider, although it’s clear that he’s making something of an effort to integrate as he attends both the meeting of the school play (which Mr McGuffy explains will be a revue) and the sports trials.

Roland’s isolation is made plain as the camera spies him silently watching the others on several occasions.  Firstly, he observes Zammo and Jonah having a food fight in their cookery class and later, as all three queue to get food from the van, Roland (further up the queue than they are) is again seen silently watching Zammo and Jonah’s animated conversation.

This episode also shows that Zammo and Jonah are in some ways quite different – although the tensions that briefly bubble to the surface aren’t exploited very often in the future.  Zammo loves sports – he’s awed that Benny Green asked him to join in a kickabout – whilst Jonah doesn’t.  Zammo plans to attend the sports trials (as does Roland) whereas Jonah indicates that the whole thing’s beneath him.

Gripper briefly pops up to torment Roland once again, but most of the bullying he receives comes from his own classmates.  Zammo, Jonah and Annette are all  merciless in their taunting of him, but after the sports trials there’s just a hint that maybe a corner has been turned.  Zammo doesn’t distinguish himself by coming fifth in the 1500 metres, but it’s a better result than Roland’s efforts in the shot put.  He falls over on both attempts and doesn’t register a throw – to the jeers of those watching – but as he dejectedly trudges off Zammo appreciates that he at least took part (unlike the still-mocking Jonah) and commiserates with him.

But there is a silver lining, as he gets picked for the school revue (although he doesn’t know that this is only because Miss Mooney pulled some strings and asked Mr McGuffy to find him a place).  The expression of joy on Roland’s face is priceless and it seems that maybe this could be the making of him.  Although with Gripper still hovering about, possibly one shouldn’t expect a happy ending anytime soon.

There’s also a brief mention of the dreaded clarinet, although this episode the dilemma that Belinda has to face is whether she’ll decide to attend hockey practice or orchestra practice after school, since they both take place on Tuesday evenings.  It’s another moment that I doubt had many people on the edge of their seats ….