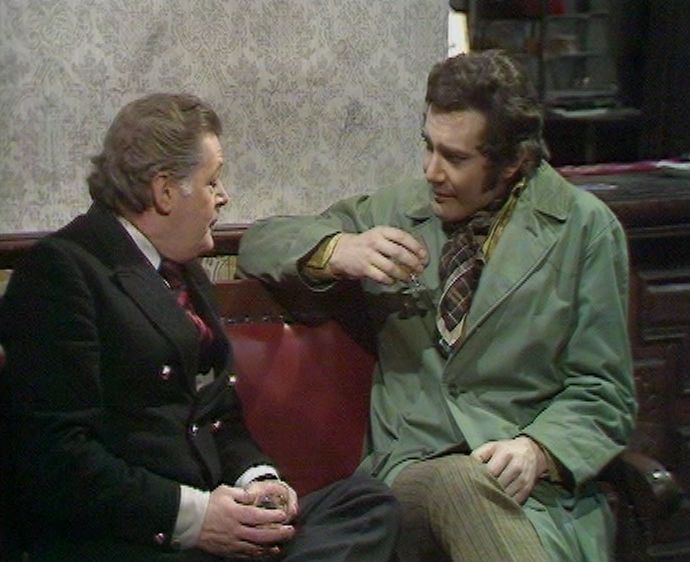 Quist is called to a meeting with the new Minister (David Davies).  Although the Minister is full of Welsh bonhomie, he makes it clear that he finds both Quist and Doomwatch to be something of a problem.  He’d much prefer it if they didn’t do anything controversial – but Doomwatch exists to stir up controversy and Quist isn’t prepared to sacrifice their independence.

Returning to the office, Quist is intrigued to learn of some interesting statistics from a small Welsh village that forms part of the Minister’s constituency.  The divorce rate is much higher than the national average, the ex-miners prefer to drink gin rather than beer and there’s been several reports of cock fighting.  All  of this is enough to make him send Ridge down unofficially (posting as a journalist) to do some digging.

The decline of the coal industry in the 1970’s and 1980’s hit the Welsh valleys hard – whole communities who had relied on the mines for employment found it difficult to find alternative employment.  The Battery People takes this as a starting point and depicts a typical Welsh village where the ex-miners have been fortunate enough to find new jobs – in the battery farm run by Colonel Archibald Smithson (Emrys Jones).

It’s undeniable that the Welsh here feel a little stereotyped, boyo – which might have something to do with the fact that several of the actors, such as Jeremy Young (born in Liverpool) and Ray Mort (born in Lancashire), had to put on Welsh accents.  With a fairly small cast it’s surprising that they didn’t try and recruit more Welsh actors, presumably the likes of Talfryn Thomas were busy that week!

But although Young might not be Welsh-born, he’s still very good as Vincent Llewellyn, the foreman at the Colonel’s farm.  Llewellyn has recently broken up with his wife and although it’s not explicitly stated, his impotence was the main reason.  Eliza Ward, as his wife Elizabeth, also gives a powerful performance – she sounds like she was Welsh-born, although with only two acting credits to her name it’s difficult to be sure.

The Battery People was one of Emrys Jones’ final television appearances.  In the few years prior to this he’d had several notable credits, including the Master (not that one) in the Doctor Who story The Mind Robber and Dr Roger Full in the Out of the Unknown episode The Little Black Bag.  He’s equally as good here – Colonel Smithson appears to be a generous benefactor, bringing wealth and prosperity to what would otherwise be a deprived area, but there’s naturally a catch.

His battery farming methods cause sterility and impotence among his workers.  This is one of the reasons why he insists that the majority of them are over forty (although he claimed this was because he wanted a stable labour force).  That nobody’s put two and two together before Doomwatch start poking around seems slightly remarkable, as the high breakup of marriages would indicate that Llewellyn isn’t the only one to have suffered from performance issues.  And the reason why the ex-miners now favour gin over beer remains unexplained!

The Colonel seems to be a totally ruthless man, who knew (but didn’t care) about the problems he was inflicting on his workforce, but there is room for a slightly different reading.  At the start of the story we hear him ask Llewellyn to make sure all the men wear gloves when handling the fish (it’s the fluid in the fishtank which is the major problem).  Llewellyn and the others put the gloves on, but take them off again when the Colonel leaves.  It’s difficult to handle the fish when wearing gloves and Llewellyn seems to believe that the Colonel knows this and is simply going through the motions by asking them to wear gloves at all times.

Was this the case?  Or was the Colonel simply slack in ensuring that his orders were carried out?  At another point in the story it’s strongly implied that he rarely ventures onto the factory floor, so it’s not quite cut and dried.  But whether he’s incompetent or uncaring, he suffers a fairly grisly fate, which Quist seems to regard as poetic justice.

A thought provoking tale (the stock footage of battery chickens is enough to turn anyone vegetarian) The Battery People, the last surviving series one episode, is another strong story.