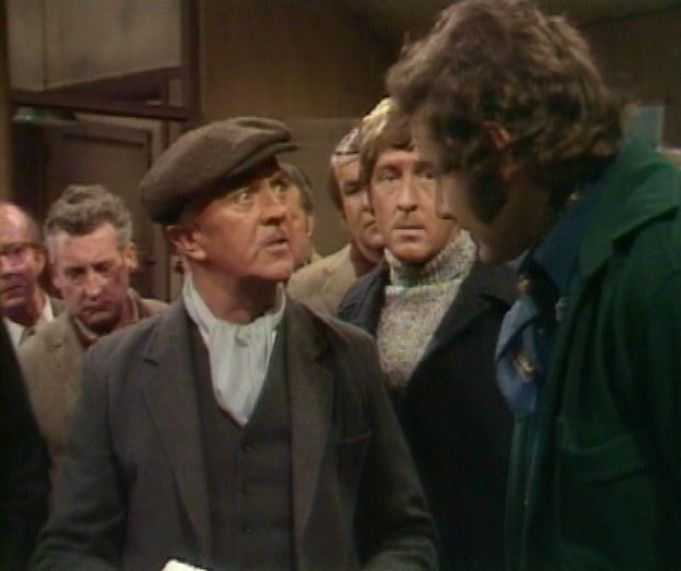 Six months ago, the two hundred inhabitants of the tiny Pacific island of St Simon were evacuated back to the UK (the British government believed that they were at risk from heavy earth tremors).  Because they’ve been a totally closed community for some 150 years Quist sees them as an excellent source of research material.  By studying them and contrasting (both physically and genetically) with a group of volunteers drawn from towns and cities, Quist and the others will be able to evaluate how the environment and the presence of other people affects human evolution.

Although The Islanders was an early series two entry, it clearly points ahead to the direction Doomwatch would take during its third and final series (after producer Terence Dudley had wrested creative control from creators Kit Pedler and Gerry Davis).  Louis Marks’ script is a human drama first, with the environmental problem (mercury poisoning) somewhat secondary.

The social impact of the islanders reintegration into society concerns Quist.  They’re currently living in a camp, which looks uncomfortably like the sort of place used to house prisoners of war during WW2.  The man from the government, Mullery (Geoffrey Chater), doesn’t seem at all concerned and he tells Quist that they’re free to leave and go anywhere they want at any time.  Since they come from a British protectorate they have the same rights and freedoms as any other British citizen.

But Quist knows they’re not the same.  “They come from a place where there’s no cars, no telephones, no televisions.”  The islanders lack the necessary tools and knowledge to live in a modern, technological world – in time they can learn, but it appears Mullery is keen to pass the buck.  Chater is perfect casting as the dispassionate, disinterested official (he’d later pop up as a semi-regular in Callan playing a not dissimilar figure)

When the islanders lived on St Simon, they formed a perfect unit – everybody knew their place and were content to work hard – but exposure to wider civilisation has begun to fracture this unity.  This is demonstrated by the differing viewpoints of Thomas Prentice (a strong performance from George A. Cooper) and his son Isaac (David Buck).  Thomas, the headman of the community, wants to keep everybody together, but this seems impossible when there’s no work for them.  A few people have already begun to seek employment elsewhere and one of them is Isaac.  He’s found a job at Craxton’s Bakeries and is keen to press ahead.  He’s not surprised when Quist tells him that the ministry have no plans for them and he’s not bothered either – he believes they need to make their own way.

Thomas falls ill and dies from what appears to be a bad case of flu.  The observant viewer should have picked up very early on that John Ridge, who’s been working closely with the islanders for some time, has had the sniffles.  Although the eventual reveal is somewhat laboured, Quist eventually confirms that as none of the islanders have ever had flu they have no resistance and therefore it could be fatal to them.

Isaac’s brave new world at Craxton’s quickly turns into a nightmare.  Director Jonathan Alwyn creates an interesting, albeit brief, sequence on the factory floor – shots of the cake making machines (which had previously filled Isaac with wonder) now take on a sinister and disorientating air.  After he angrily resigns, he emerges into a busy London street and is confronted by the noise and traffic.  Alwyn then closes up on Buck’s anguished face.

The doctor’s report confirms that Thomas died of liver failure – the flu just finished him off.  Quist and Isaac, together with a small survey team, return to St Simon where Quist is able to confirm that the islanders have been slowly suffering from mercury poisoning for decades – a case of the flu would simply have speed up the process.  Isaac is appalled.  “Why did this have to happen to us? Never had any wars, never had any quarrel with anyone. Just wanted to live our own lives.”

Although there’s quite a community of islanders, there’s essentially only four speaking roles – Thomas, Thomas’ wife Joan (Shelagh Fraser), Isaac and Alice (Geraldine Sherman).  George A. Cooper is excellent, but his role is fairly small since Thomas quickly succumbs to the mysterious illness.  Shelagh Fraser and Geraldine Sherman are both fairly peripheral characters, which leaves David Buck as the main voice of the islanders.

We follow his journey as he changes his opinion about the benefits of modern society from positive to negative.  Although part of the issue I have with Louis Marks’ script is that since Isaac’s point of view changes so rapidly (and it’s also problematic that he’s only islander we follow in any detail) it doesn’t really convince.  He’s portrayed as something of an innocent – easily manipulated by the factory owner – but the script doesn’t really serve him that well.  And what of the others?   What do they think of this brave new world?  We never really find out, which reduces them from an active, living community to nothing more than a collection of colourful extras.

In the end, Isaac is content to return to St Simon (as do the others).  Quist can’t recommend this, since the poison there will shorten all their lives, but Joan counters that there are just as many hazards here.  “They judged us and found us wanting” mutters Quist.

The Islanders never quite seems to come together.  The themes are interesting, but in the end it’s slightly unsatisfying.  We’re told that several other islanders, in addition to Thomas, have fallen ill, but since we never know them, the question of whether they live or die doesn’t have any impact.  The concept of a group of people totally unsuited to life in a modern technological society is a good one, but apart from a few scenes isn’t developed in any great detail.

John Paul has some decent moments (especially playing opposite the cold-hearted government official expertly portrayed by Geoffrey Chater) but Simon Oates is pretty poorly served by the script and barely contributes.  It’s not a disaster, but it’s fairly unmemorable stuff.