Skip to content
HomeDoctor Who – Target Books. A personal appreciation

With a new edition of David J. Howe’s history of the Doctor Who Target books just released, the rather nice feature on Target artwork in the current Doctor Who Magazine (DWM 499) as well as the latest wave of reprints, it seems like the ideal time to take a brief look at Target’s Doctor Who imprint.

In the pre-video age, the tv tie-in novelisation was one of the best ways (along with off-air audio recordings of course) to relive memories of your favourite series.  I’ve plenty of books of this type in my collection, but for sheer volume the Target Doctor Who range is well out in front.

From receiving my first (The Day of the Daleks) as a birthday present in 1979 to finally plugging those remaining gaps in my collection in 1987 (The Monster of Peladon and The Ribos Operation) following a visit to Forbidden Planet in London, part of the pleasure of the Target range was the time and effort it took to track every last book down.

Back in the olden days, you couldn’t simply buy a book online with a few clicks, you had to go out and locate them – one by one.  So every Saturday morning I’d head off to my local WH Smiths and peruse their Who titles.  They tended to have a selection of the more recent books as well as a handful of older reprints – but many remained tantalisingly out of reach.  For example, for some reason I found it very hard to track down The Android Invasion (I was told it was out of print) until suddenly a single copy appeared on the WH Smiths shelves.  Naturally enough I snapped it up!  But many weeks would end in disappointment as the books I required never seemed to make it to my neck of the woods.  This meant I had to venture further afield or try my luck with second-hand bookshops (also handy for tracking down first editions with the original covers).

But although the thrill of the chase was part of the fun, the books themselves were also quite important.  For me, there’s three clear ages of Target – the first is the Golden Age, with Terrance Dicks, Malcolm Hulke, Brian Hayles and Gerry Davis all crafting some of the best novelisations in the range.  The late 70’s and early 80’s is the Bronze Age alas, as Terrance ended up as pretty much the last man standing, churning out some fairly nondescript books month after month.  The Silver Age runs from the mid 80’s onwards and is particularly enjoyable thanks to the contribution of many Hartnell and Troughton era scriptwriters who, some two decades on, returned to pen novelisations of their original scripts.

The cover artwork was often another memorable part of the package. Chris Achelleos’ work remains iconic, but it’s nice to see in the DWM article that other artists, such as Jeff Cummins, are also highlighted.  It’s remarkable to me that Cummins only painted nine covers, as I’d assumed he’d done many more, but every one was a winner.  His personal favourite is The Horror of Fang Rock and it’s hard to disagree with him.

I’m going to finish off with my top ten favourite books (apologies if some of the choices are crushingly obvious).

I think a little love for Malcolm Hulke’s novelisation of The War Games is in order.  Although Hulke is correctly lauded as one of Target’s key writers, his final book for the range is often rather unfairly dismissed.  This seems to be because he had to compress ten episodes down to a 120 page count, although I confess that I can find little of note omitted.  Whilst I love the tv version of The War Games dearly, it did have a fair amount of running on the spot, so Hulke’s leaner book version is fine by me.  There’s also a pleasingly darker tone at times, noticeably right at the start – when it’s made clear that the 1917 zone is one of the worst places in the universe you could ever hope to find yourself.

If the television original is rather insubstantial (although I still rather like it, see here) then Dudley’s book is able to flesh out the story very successfully.  Many loose ends are tied up and it’s very pleasing that the Doctor is given a proper leaving scene (much better than the tx version where he just nips off without a word to anyone).

Gerry Davis’ novelisations were always worth reading (well apart from The Celestial Toymaker, but let’s give him the benefit of the doubt and assume his co-writer was chiefly responsible for that one) and it’s the Cyberman’s debut Troughton tale that’s made my top ten.  Although some of the logic of the story has always irked me (the business with the sugar seems rather risible) there’s an eerie claustrophobia to this classic base under siege tale which comes over very well in print. 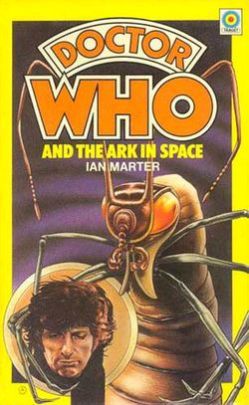 Ian Marter’s another of those writers who delivered some excellent books and his debut – The Ark in Space – has long been a favourite.  Although it sticks very closely to Robert Holmes’ original, it feels somewhat bleaker (probably because it lacks the bright visuals of the tx version).  The Doctor seems slightly off at times, but it’s no surprise that Marter has an excellent handle on what makes Harry tick.

6. Doctor Who and the Auton Invasion by Terrance Dicks (1974) 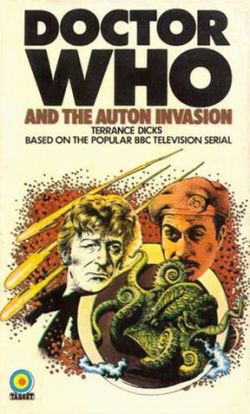 Classic early Terrance, adding considerable extra value to Holmes’ original.  Particularly noteworthy is the way that Sam Seeley becomes a three-dimensional character with strong motivations (meaning that the “oo-arr” yokel in the tx version was later something of a disappointment to me).  The Auton attack on Unit HQ is another of those “missing scenes” that also disappointed me when it didn’t show up on the VHS.

Whitaker’s novelisation makes few concessions to his young audience, as it’s wordy, dense and atmospheric.  As a young child this meant I found it somewhat difficult to get to grips with (much preferring Terrance Dicks’ efforts) but when I returned to it a few years later I was amply rewarded with a memorable tale.

4. Doctor Who and the Dinosaur Invasion by Malcolm Hulke (1976)

All of Hulke’s Target books are a joy, but I’ve always had a soft spot for this one.  From the hapless Shughie McPherson to the camp-as-a-row-of-tents Whitaker, Hulke provides plenty of incidental moments not to be found in the original teleplay.  And, of course, on the printed page the dinosaurs are very impressive!

Cotton’s novelisation is another book which made few concessions to his target (no pun intended) audience – with plenty of jokes which would have no doubt sailed right over their heads (but this is the reason why The Myth Makers is an excellent book to revisit).  Wonderful stuff and the audiobook (read by Stephen Thorne) is also warmly recommended.

For a generation, Barnes Common was just as much a part of Doctor Who lore as Totters Lane was.  Writing it from Ian’s viewpoint was a masterstoke – it gives the book a very 1950’s John Wyndham-ish feel, which I find terribly appealing.  If you only want a handful of Doctor Who novelisations, then this should certainly be one of them.  And the audiobook, read by William Russell, should also be in your collection.

Well, it was my first, so it obviously holds a special place in my heart – but it’s undeniably an excellent book.  It made such an impression that when I finally got to see the tv original (in 1986) I found it paled by comparison.  Time is a great healer though and I’m able to love the television version for what it is, but Terrance’s novel is always the way I prefer to picture the story.

2 thoughts on “Doctor Who – Target Books. A personal appreciation”