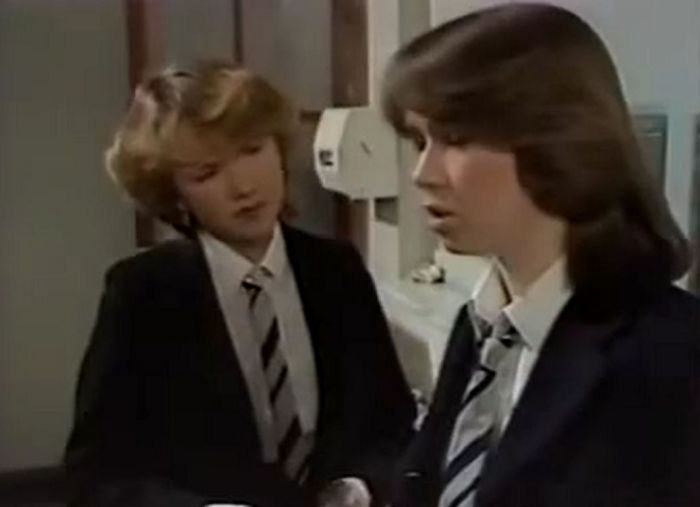 There’s two things which are odd about the start of this episode – we see Suzanne in school uniform and she’s also developed a crush on Mr McGuffy.  When we last saw Suzanne, at the end of episode nine, she was raging at how Mr Hopwood had “betrayed” her and her take on school uniform was best described as imaginative!

Something’s clearly happened which has made her decide to toe the line, at least where uniform’s concerned, but we never find out what it is.  Her hero-worship of Mr McGuffy (rather like Claire’s infatuation with Mr Hopwood in series five) is something else that’s just happened, with no prior warning.  She lends him a Toyah LP, which he promises to give a spin.  Her interest in him hasn’t escaped Mr Hopwood’s notice, who attempts to give his colleague some friendly advice about inappropriate relations.

Mr McGuffy’s having none of it though – he’s convinced that Suzanne has no feelings for him and even if she did he’d be able to rebuff her. There’s a nice spark between the two teachers and their whispered conversation in the staff room is also notable for the over-acting extra in the background.  Although she’s reading a newspaper, she’s also clearly ear-wigging and can’t help raising her eyebrows and staring at them as the story unfolds.

Mr Keating’s in fine form as he sadly examines the shocking state of Pogo’s exercise book.  The boy tells him that it fell in the bath as he was completing his homework (a transparent excuse to get out of homework no doubt) but Mr Keating is having none of it, telling Pogo that he has difficulty in believing that he takes regular baths!

This particular plot line (Pogo later sees a money-making venture in obtaining new exercise books from the cupboard in order to sell them) doesn’t really go anywhere, as it’s only designed so that Suzanne can obtain a large amount of paper from the same source.  She wants the paper to start an underground magazine – this idea was put into her head by Christine, her first notable contribution to series six.

So although Suzanne may outwardly now be conforming, she’s still railing against the numerous injustices inflicted on the pupils by Mrs McClusky.  Mr McGuffy is sympathetic and tells her and Claire that he can give their magazine his moral support, but as a teacher he can’t do any more.  As we’ll see, this conversation will later prove to have serious consequences ….

Gripper’s still causing aggro.  There’s a tussle with Pogo which is noteworthy because Pogo (normally a fairly placid character) throws the first punch, but most of Gripper’s bullying is still racially motivated.  There’s a definite feeling that things are coming to a head, especially since Randir and his friends are becoming more militant.  They give Gripper and Denny a good going-over, but it’s plain that this isn’t the end of the story.  Suzanne spots an obvious first article – the ongoing racial tensions in the school – as the lead story in their magazine.  Three guesses how that will go down with Mrs McClusky.