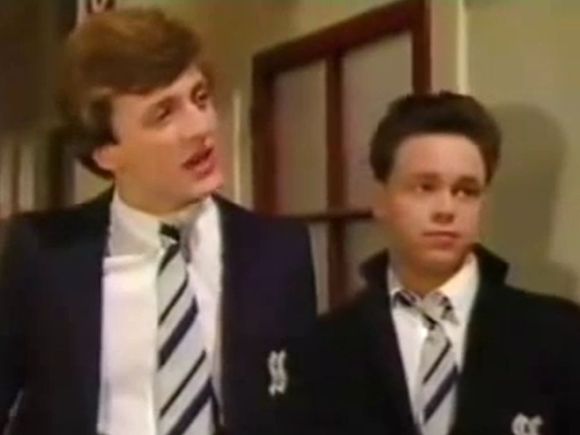 The opening scene gives us our first look at Jimmy McClaren (Gary Love) and his ever-present sidekick Nigel Flavin (Gary Hailes).  Although Jimmy has somewhat stepped into the void left by Gripper, he also bears more than a little resemblance to Pogo.

Jimmy’s a fixer – he’s happy to relive others of their money, but he likes to provide a service in return (unlike Gripper, who just liked the money).  Here, we see him plot to get someone onto the school football team (with the wheeze of stealing another boy’s boots) whilst Nigel later receives a payment after agreeing to arrange that a boy has his pick of the desks (he doesn’t like his current place and no-one else will move).

This transaction is overheard by Mr Keating and it provides us with the spectacle of Robert Hartley ear-wigging in the background as he desperately tries to hear what’s being said.  This will be Hartley’s final series as Mr Keating and I’m going to miss his firm (and usually fair) methods.

Gary Hailes would be another actor who’d make a seamless transfer from Grange Hill to EastEnders.  Gary Love would later become a regular in Soldier Soldier as well as maintaining a parallel career as a director.  Although neither continue in Grange Hill after 1984, they both manage to liven up the few episodes they do appear in.

Although Jeremy’s absent – suspended – following his bus-pass forgery, he continues to cast a shadow over Zammo.  Kevin doesn’t believe that Jeremy would ever get one of them into serious trouble, but Zammo isn’t so sure.

Annette dreams of stardom and decides to enter a fashion competition.  Her self-delusion is made plain after she boasts that she’ll have professional pictures taken, only to later be seen emerging from a photo booth, glammed up to the nines.   This storyline will pay off in a couple of episodes time.

After appearing in a one-off episode last year, Chris Jury’s Mr Knowles has now become a regular.  I’m not sure whether it was a performance choice or simply a stumble, but at one point Mr Knowles seems to forget Annette’s name for a second and then almost pronounces “historical” as “hysterical”.  An actor’s fumble maybe, but it’s also very in character for someone who’s no longer the helpless teacher we’ve previously seen, but isn’t yet totally in command of the class.

And there’s an outbreak of nits.  Eek!

An anonymous phone call to Mrs McClusky spells trouble for Zammo.  Nigel was passing at the time and is able to give Zammo a heads up – much to the despair of Jimmy, as he’s given away information for free!  Zammo believes that Gluxo was behind it, and recruits his friends for a showdown.  Unfortunately they start to drift away one by one after they fail to find him.  So that by the time the Brookdale boy does make an appearance, only Zammo and Kevin are left.

How Gluxo learnt that Zammo’s bus-pass was used by Jeremy is a mystery, which makes it much more likely that the anyonomous call was made by Jeremy (or someone on his behalf).  This ties back to Kevin’s comment earlier in the episode and although Jeremy wouldn’t have benefitted from grassing Zammo up, it seems like just the sort of thing he’d do.  So why didn’t Zammo consider the possibility?