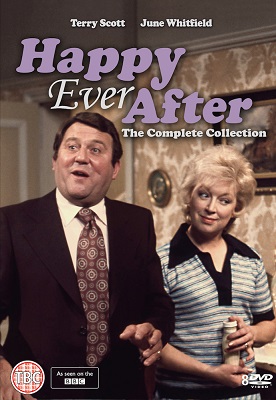 Happy Ever After will be released by Simply Media on the 26th of September 2016.  Review here.

Terry and June Fletcher (Terry Scott and June Whitfield – Terry and June) are a middle-aged, middle-class couple in middle England whose children recently left home. However their path to domestic bliss is soon interrupted by the permanent arrival of scatty Aunt Lucy (Beryl Cooke – The Bill) and her chatterbox mynah bird.

Running from 1974 to 1979 across 41 episodes, including the Comedy Playhouse pilot and Christmas specials, essentially the same characters would be transposed to the even longer-running Terry and June (1979-1987). Relive the exploits of TV’s happiest hapless couple from the beginnings of their perennial partnership in this original series, directed and produced by BAFTA winners Ray Butt (Only Fools and Horses) and Peter Whitmore (Yes Minister), which arrives on DVD 26 September 2016.