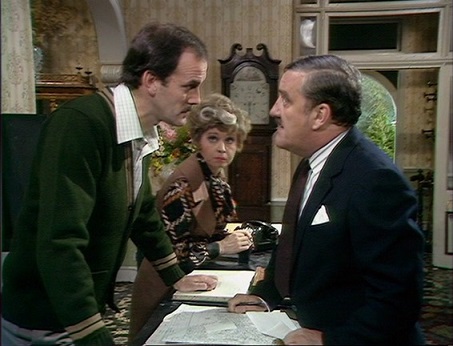 Fawlty Towers is as close to sitcom perfection as you can get.  If one were being picky then you could say that the second series does have one sub-par effort (The Anniversary) but this is only because the other eleven were so good.

There are several obvious reasons as to why the series clicked from the start (even if the public and critical feedback for series one was a little muted to begin with).  These include the scripts by John Cleese and Connie Booth and the four regulars (Cleese, Booth, Scales, Sachs).

But equally important were the guest casts.  Basil Fawlty has to have strong characters to interact with, otherwise his manic personality ends up unbalancing the show.  Strong characters require good actors though, but Fawlty Towers never had a problem in acquiring the best comic actors around.

Joan Sanderson, Geoffrey Palmer and Bruce Boa were amongst those who were able to stand toe-to-toe with Cleese.  Some sitcom stars (especially if they were the co-writer as well) may have found themselves threatened by having to share the screen with experienced old pros (there’s plenty of evidence down the years to suggest that certain actors hated to have the limelight shone on anyone but themselves).  Cleese had a refreshing lack of ego on this score though and never seemed worried that others may get bigger laughs than him.

The Hotel Inspectors has one of the series’ most recognisable guest stars.   Bernard Cribbins (b. 1928) remains a national treasure.  He first came to prominence in the 1960’s with a number of film appearances (several Carry Ons, The Wrong Arm of the Law with Peter Sellers, etc).  In the 1970’s he became a children’s favourite, narrating The Wombles and making regular appearances on Jackanory.  He continues to act, probably his most high-profile recent credit was as Wilfred Mott in Doctor Who.

Mr Hutchinson (Cribbins) has arrived for a stay at Fawlty Towers.  His profession is a bit of a mystery but Basil, getting the wrong end of the stick, mistakenly believes that he’s a hotel inspector.

If Basil was rude to every guest who walked through the door then it would be amusing, but the joke would wear thin pretty quickly.  The genius of Cleese and Booth’s scripting is that Basil is a man of many and varied prejudices, which then informs us about which guests he favours or disfavours.  If you’re a member of the promiscuous society, for example, you’ll attract Basil’s ire, but a titled or professional person is guaranteed a much easier ride.

To begin with, Mr Hutchinson irritates Basil, mainly because of the way he talks.

Mr. Hutchinson: There is a documentary on BBC2 this evening about Squawking Bird, the leader of the Blackfoot Indians in the late 1860s. Now this starts at 8.45 and goes on for approximately three-quarters of an hour.
Basil: I’m sorry, are you talking to me?
Mr. Hutchinson: Indeed I am, yes. Now is it possible for me to reserve the BBC2 channel for the duration of this televisual feast?
Basil: Why don’t you talk properly?
Mr. Hutchinson: I beg your pardon?
Basil: No it isn’t.
Mr. Hutchinson: What?
Basil: It is not possible to reserve the BBC2 channel from the commencement of this televisual feast until the moment of the termination of its ending thereof, thank you so much.

The sudden gear-change which occurs when Basil believes Hutchinson to be a hotel inspector is a lovely moment.  From indifference and contempt, Basil quickly becomes the perfect host.  But even when Basil’s trying his best, things never quite work out (witness the saga of the omelette) and like every other week his house of cards slowly collapses until he’s left humiliated and isolated.  This sounds a little bleak, but luckily for us Basil always seems to recover from whatever crushing reversal he’s received in order to do battle the following week.