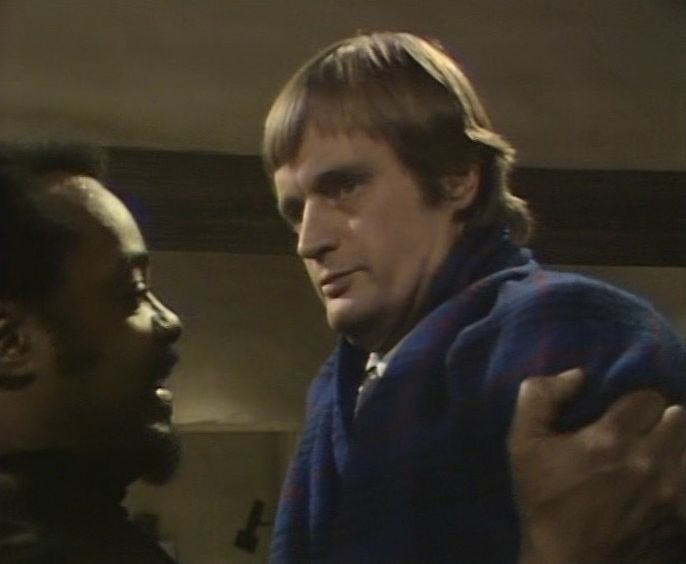 The previous episode concluded with Sapphire returning to the house pursued by the soldiers and ended on a close-up of Helen screaming.  A more effective, although possibly disturbing, cliff-hanger could have been created by allowing the action to run on just a little longer – this would have showed us a tense shot of Sapphire about to be beheaded.

Luckily Steel’s on hand to save her – by freezing the soldiers – although having to reduce his body temperature so dramatically means that his energy is temporarily spent.  That the soldiers were now full physical manifestations, whereas previously they had been insubstantial “ghosts”, poses more questions and seems to run counter to the events seen at the start of the serial, where time was depicted a subtle, non-corporeal manipulator.

A little more background is established after Rob asks Sapphire if there are any more like her and Steel.  She replies that there are 127, although Steel counters that there are only 115 (“you must never rely on the transuranics”).  This ties into the opening credits voice-over but it’s something that’s never developed – it serves as simply another tantalising hint about the nature and origins of the mysterious Sapphire and Steel.

It’s slightly coincidental that immediately after it’s revealed that Sapphire and Steel have colleagues, one turns up.  Lead (Val Pringle) is an imposing figure (at first sight Rob calls him a giant) but he’s a lot less frightening than he first appears.  He likes a laugh, that’s for sure, and his first question on seeing Sapphire is to wonder what food is in the house.  Like Silver, Lead is a good deal more frivolous than Steel, and the clash of their personalities is entertaining.  Lead provides insulation and chides Steel that he shouldn’t have attempted to lower his body temperature without him around.

Lead also brings news from home.  Jet sends her love to Steel, which amuses Sapphire no end whilst he tells them that Copper’s having problems with Silver again.  These throwaway lines hint at possibilities for future team-ups, but ultimately Silver is the only one we meet.

The ending of this episode is rather busy – Steel, Lead and Rob are upstairs attempting to prevent time from breaking through again, whilst Sapphire and Helen are in the kitchen.  They intend to burn all the nursery rhyme books in the house, although this plan goes a little awry when pages start to fly about.  Although it’s rather obvious they’re attached to wires, this isn’t too much of a problem since so much else is going on to ensure that a suitably apocalyptic atmosphere is created.