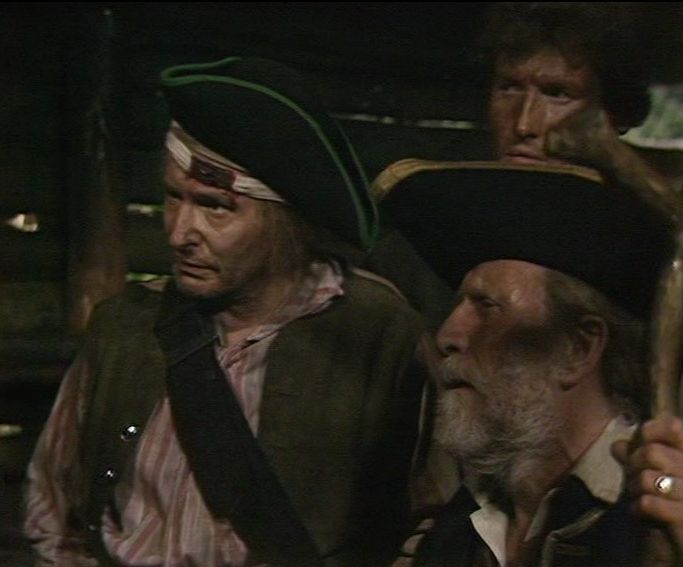 Once again, the Squire is forced to count the human cost of his quest for gold, since all three of his servants now lie dead. “Old Redruth. Joyce. And now Hunter. Loyal souls, all of them, who served and trusted me. I have much to account for, Livesey.”

The Doctor offers a brief word of comfort, but maybe Livesey’s gesture here is just an automatic one. It’s certainly debatable that Trelawney’s escapade can be judged to be an honourable one – as his intention was to keep the plundered gold for himself (after, presumably, sharing out a small portion to the others) he can hardly claim the moral high ground over Silver and his men.

Jim decides to take Ben Gunn’s boat and return to the Hispaniola. It’s a brave, if foolhardy venture, since it brings him into contact with the murderous Israel Hands. Patrick Troughton once again is on good form as Israel, reacting calmly to Jim’s statement that he’s returned to take possession of the ship.

Exactly why Jim decided that the pirates onboard would be happy to receive him is a slight mystery. True, Israel seems harmless enough to begin with (he’s incapacitated after a fight to the death with another pirate) but Jim wasn’to know this. You’d have assumed that after the horror of the stockade battle, with death all around him, Jim would have been a little more cautious. But if Trelawney has begun to learn the true cost of adventure, maybe Jim hasn’t.

All that we’ve seen of Israel has primed the audience to expect that he’ll turn on Jim when the moment is right, and so it proves. Israel’s pursuit of Jim is a nicely shot sequence from Michael E. Briant, especially as the pair climb the rigging to face their final reckoning.

The ever resourceful Jim returns to the island, only to find that Silver and the others have taken possession of the stockade. Alfred Burke is at his most affable, as Silver appears delighted to see the boy and offers him a chance to join them. Jim refuses and furthermore tells them all that they’ll never see the Hispaniola again.

This is something of a turning point – Jim’s life should now be forfeit, but Silver won’t kill the lad, which displeases the others intensely. Silver has been tipped the black spot, but even with his back to the wall he’s still able to run rings around the rest of his crew.

Silver, with his keen sense of self preservation, is looking to change sides and Jim is an important part of this. Ashley Knight is never better than In the scene where Livesey attempts to forcibly remove Jim from the stockade. Jim refuses, biting the Doctor’s hand at one point, because he gave Silver his word he wouldn’t attempt to escape. This action bounds Silver and Jim even tighter together.

The sting in the tail – the treasure is gone from its resting place – is the prelude for the final (albiet brief) bloody battle. Ben Gunn, of course, found the treasure nine months ago and brought it back to his cave. The reveal is done in a highly theatrical manner – a seemingly never-ending stream of coins gush out onto the cave floor as the faces of Silver, Livesey, Ben, Trelawney and Jim are overlaid. It was surely intentional that Livesey’s face was impassive whilst both Trelawney and Jim showed great pleasure.

As I said earlier, it doesn’t get much better than this. It’s something of a mystery why this excellent version of Treasure Island hasn’t appeared on DVD before, but it’s something that any devotee of this era of British television should have in their collection. 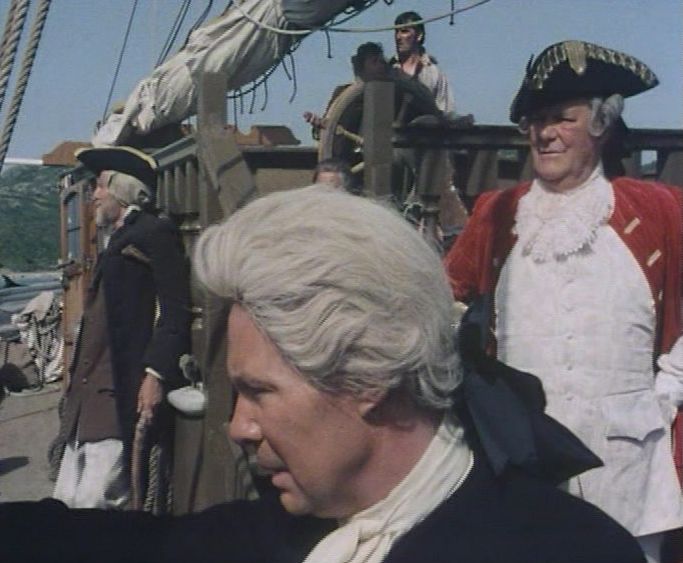