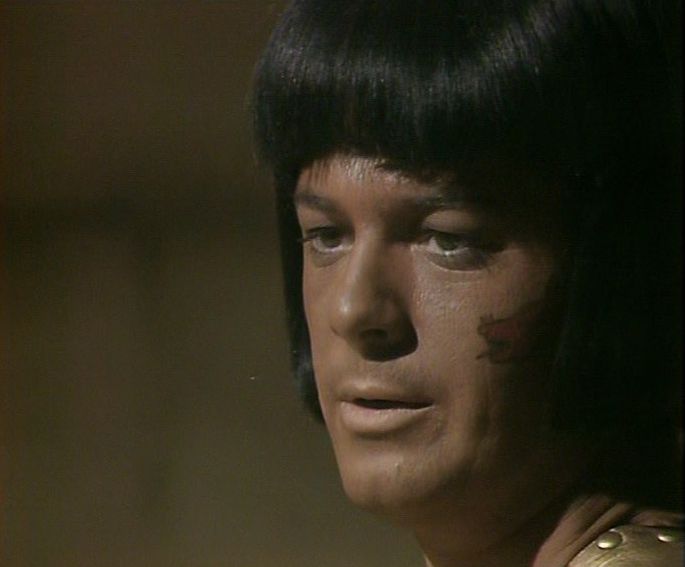 Having made the decision to temporally abandon human sacrifice, Kukulkhan agrees to spend the night alone in the temple, where he will receive council from the Spirits of the Dead.  Kukulkhan certainly receives judgement, albeit of a very grim kind, but it was dispensed on the orders of the corporeal Nasca.

A pity that Tony Steedman exits the story so early, but the removal of Kukulkhan allows Chimalma to move into the centre of the narrative as she and Nasca find themselves on opposite sides.  Troughton continues to impress as he takes full advantage of John Kane’s well-crafted dialogue.  Here, Nasca explains to Chimalma and Heumac that although he has total faith in his god, this isn’t necessarily a blessing.  “It is a torment. To be so close to divinity, to share in his mysteries and yet to be a man amongst other men with their weaknesses and squalor. It is an agony of longing.”

Mahoutec agrees to attack Heumac’s army, camped outside the city walls.  Nasca wants all of Heumac’s men – numbering one thousand – sacrificed, which causes Mahoutec pause for thought.  But he agrees anyway.

Events once again take place at night.  Moody lighting, judicious use of sound effects and a subtle instrumental track all help to create a sense of unease.  The drama continues to bubble along nicely as Mahoutec and Heumac clash.  Mahoutec dislikes and distrusts Heumac’s people (calling them scum) and personally detests Heumac since they both wish to marry the same woman.  But does Mahoutec desire Chimalma personally, or does he simply want to sit on the throne?

Mahoutec and Heumac duel, although it’s over very quickly.  Heumac wins but spares Mahoutec’s life.  This infuriates Mahoutec – when it is known he lost but wasn’t killed he won’t be able to face his men.  He demands that as the vanquished he has the right to insist Heumac kills him, but the other man declines.  “You must find your own end.”

As I’ve said, Kukulkhan departs the story with something of a whimper rather than a bang and the duel between Mahoutec and Heumac is a disappointingly brief one.  But there’s still plenty to entertain here, not least when Chimalma, Nasca and the others discover Kukulkhan’s body.  This gives Troughton an opportunity to notch his intensity level up to eleven as Nasca declares that judgement has been carried out.