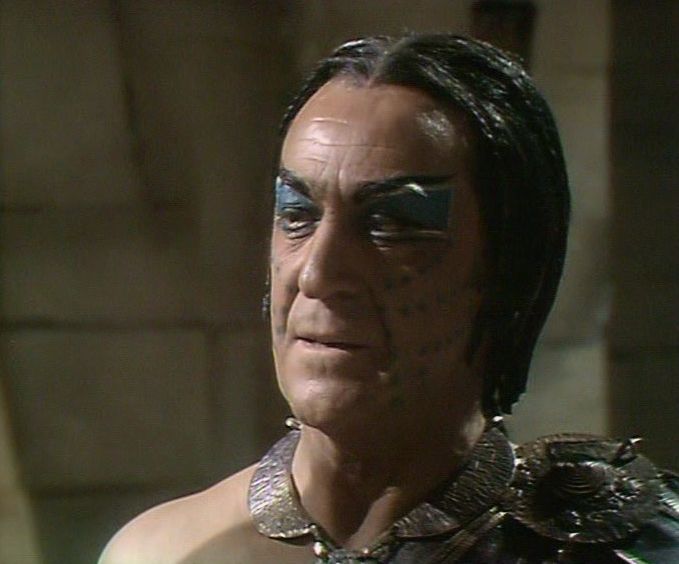 Once more Nasca attempts to manipulate Mahoutec.  As expected, Troughton gives a mesmeric performance in this early scene – he’s very still, not offering any excessive movements, with his rich, deep voice pitched especially low.  Nasca might be a dangerous fanatic but he’s wise enough to know that at this time he needs to appear to be the voice of reason.

Mahoutec might have been presented up until now as a narrow-minded and jealous man but, unlike Nasca, he didn’t seek the Emperor’s death in order to further his own ambitions.  Nasca and Mahoutec are presented as uneasy allies, with Mahoutec still in ignorance about the true course of events – believing Nasca’s story that the Emperor was killed by a vengeful spirit.

There’s further opportunity for Troughton to show Nasca’s evil side as he interrogates the unfortunate Tozo.  Tozo is unwilling to speak, so Nasca’s shadow, the mute Chadac (George Lane Cooper) steps up to apply some torture.  As might be expected, Chadac’s ministrations (a series of needles) isn’t presented in an explicit manner, but the fact that it’s there at all in a children’s series (and that the child identification figure is the one to suffer) is interesting.  Richard Willis is able to show Tozo’s pain and suffering which, along with Troughton’s silky-voiced villainy, gives the moment a certain impact.

That Chimalma is of royal blood is made clear after she autocratically orders Heumac to search the temple for hidden passages.  If they can find them, then it’ll prove that her father was murdered by an assassin, not the spirits of the dead.  It all seems rather convenient that he’s able to do so with great ease (also finding the paralyzed Tozo along the way) but even with six episodes to play with you have to expect a few plot contrivances.

But this episode really belongs to Troughton.  Nasca has another key scene where, dressed in a ceremonial mask and with an oppressive chanting soundtrack, he utters the following at Kukulkhan’s funeral.  “Before the coming of Teshcata, the plains of death were a desolate place. There was no shade and the tears of the dead burnt the soil. But Teshcata came and said let the sun weep tears of blood and blood fell upon the plains of death and the desert became a paradise.  And Teshcata said let all those who have blood shedded for me and those who have none, let them give me their hearts that I may look upon the love therein.”

Lurid stuff, especially after Nasca rips out Kukulkhan’s heart (which thankfully happens off-screen).  With Kukulkhan’s death, Nasca is a step closer to absolute power but there’s still the problem of Chimalma.  So she must die as well ….