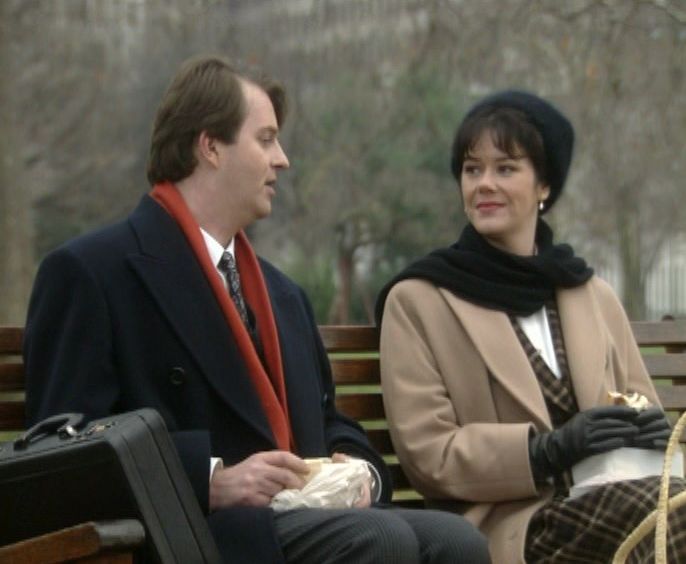 Geoffrey Tupper (Merton) and Sarah Tiptree (Josie Lawrence) are both trapped in loveless marriages and for the last ten years have met in the park each day for lunch.  It offers them a small release from the anguish of their home lives and there’s nothing to suggest that today will be different from any other.  But things end up taking a surprising turn ….

Lunch in the Park, along with Visiting Day and Sealed with a Loving Kiss, was broadcast as part of the first series of Comedy Playhouse.  Back in 1961 Stanley Baxter and Daphne Anderson played the park-bench would-be lovers.  Unfortunately all of the shows from the first series of Comedy Playhouse – apart from The Offer – have been wiped, so there’s no way to compare and contrast.

The most noticeable thing about this episode is that there’s no laugh track.  This is probably because – deliberately – Lunch in the Park is not terribly funny.  Galton and Simpson resisted the temptation to throw in many gags, instead there’s more of a straight-play feel as Geoffrey and Sarah’s characters are slowly drawn out.

We learn that Geoffrey works for the Ministry of Defence and has a bed-ridden wife, whilst Sarah is married to a lorry-driver who possesses a very limited culinary palate.  Their chat is of a very inconsequential nature – Geoffrey frets that something might have happened to Sarah because she wasn’t waiting for him (she’s always there first).  When she does arrive – just two minutes late – talk turns to weighty topics such as how difficult it is to get all the shopping done, especially when the shops shut early.

Geoffrey then remembers the time when, as a child, he went shopping for his mother.  He bought eggs and then potatoes in that order, which ensured that the eggs were crushed.  Sarah asks if his mother was angry but Geoffrey has only good things to say about her.  “She was a very kind woman my mother. She’d never hit me. Not once in her whole life. She used to get me father to do it. She wouldn’t look, she used to go out the room, she couldn’t bear violence. She used to say ‘you wait till your father comes home’ and then she’d tell him. And then she’d have to go out because she didn’t like to hear me screaming.”

Moments like that make it obvious to see why a studio audience wouldn’t have enhanced this one.  There are laughs to be had elsewhere – Geoffrey offers Sarah a bite of his apple, but warns her to look out for a worm – but the general tone isn’t comedic.  Galton and Simpson had already tried this on occasions with Tony Hancock – the classic radio episode Sunday Afternoon at Home being a good example.  Back then they weren’t scripting gags, it was inconsequential character interaction and pauses (a risky thing to do on radio) which made the episode work.

Merton and Lawrence are excellent, as they were in Sealed with a Loving Kiss.  Merton dials down his usual persona, presenting Geoffrey as a kindly, thoughtful man whilst Lawrence’s Sarah is also shown to be a thoroughly decent type.  Right up until the end it’s uncertain where this is heading – will they depart with a promise to meet again tomorrow or will something definite happen?  Galton and Simpson elect to take the latter option and it finally becomes clear that the whole episode has simply been the setup for the final thirty second punchline.

That took a great amount of nerve.  To make the payoff effective it was important not to even hint such a conclusion was possible, meaning that the episode had to maintain its humdrum course.  There’s a certain amount of irony to be had from the fact that some online reviews of this episode found people bailing long before the ending, complaining that nothing was happening.  If they’d made it to the end they might have understood what G&S had intended.

Does it work?  Yes I think it does, but even if it didn’t, it was well worth trying.  It’s an atypical effort from the Galton & Simpson catalogue, but one which I’m glad was dug out to conclude the series.