Skip to content
HomeDoctor Who – Nightmare of Eden. Episode Two 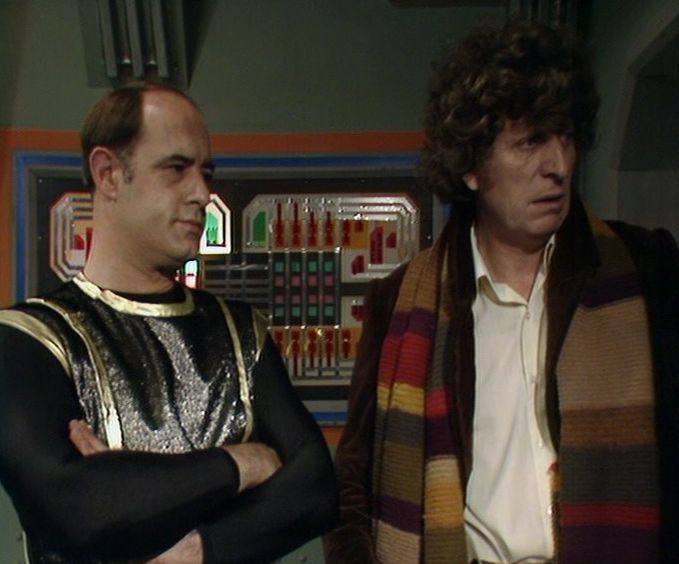 If the end of episode one was funny, then the start of the second episode is even funnier – mainly because the Mandrel gets to wave his arms about in a terribly expressive way.  When seen in the shadows of their home planet, Eden (as stored on Tryst’s CET machine) they’re quite impressive – but in the harsh unforgiving light of the Empress’ corridors it’s a different matter entirely.

We don’t see too much of them in this episode thankfully, as the sight of the Mandrels stomping about tends to dissipate any tension which has been generated.  And that’s a shame since there’s an interesting story unfolding.  The problem with the two ships somewhat moves into the background once the Doctor realises that someone on board is smuggling a drug called Vraxion.

The Doctor tells us just how deadly it is.  “I’ve seen whole communities, whole planets destroyed by this. It induces a kind of warm complacency and a total apathy. Until it wears off, that is, and soon you’re dead.” It’s more than a little unusual for the series to tackle drug abuse, even if it’s done in a fairly mild way. Whether the comedic aspect of the script worked against the drug message or actually helped to cushion the reality about the debilitating nature of Vraxoin is a rather moot point.

We get several opportunities to observe how deadly Vraxoin is, firstly after it affects Secker, Rigg’s co-pilot, and later when Rigg unwittingly takes a drink laced with the drug.  This is a slightly perplexing moment – the drink was intended for Romana, but why would anybody wish to drug her?  And just how long had this mystery person been waiting to drop the drug into the drink and how could they know that Romana would want a drink anyway?

The effect it has on Rigg is drastic as he goes from being a sober, responsible authority figure to a hysterical, twitchy mess.  This is well-played by Daker, but unfortunately his role in the serial is coming to an end, something which is suggested as several new characters – Waterguard Fisk (Geoffrey Hinsliff) and Landing Officer Costa (Peter Craze) of the Azurian Excise – are introduced.

With their sparkly uniforms, Fisk and Costa are comedy authority figures who attempt to restrain the Doctor but fail hopelessly. The moment when the Doctor tells them to look over there whilst he hot-foots it in the opposite direction sums them up.  Like Fiander, Hinsliff and Craze are playing it strictly for laughs and whilst they entertain, a little more genuine threat from them would have raised the stakes somewhat.

The Doctor’s spent part of the episode pursuing a mysterious man who clobbered him and took the Vraxoin he found in Secker’s locker. We’re no closer to solving that mystery, but the episode ends in an arresting way as the Doctor and Romana leap into the projected image of Eden ….