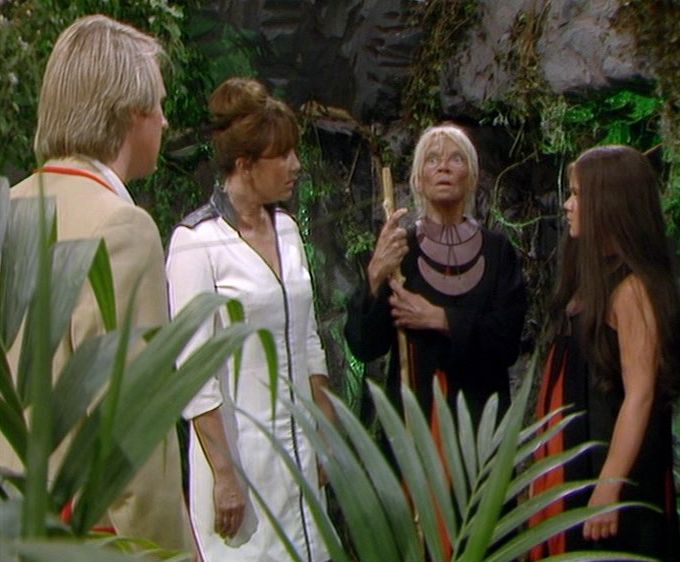 Although Mary Morris was only in the studio for a single day, they certainly got their money’s worth out of her.  She briefly appeared in episode two, but all of her key scenes are in this one.

There’s something delightful about the way that Panna crosses swords with the Doctor.  Knowing that no man (save an idiot) can look into the Box of Jhana and retain their senses, she has no hesitation in tagging the Doctor as such.  It’s a little hard to imagine some of the previous Doctors being so pliant (especially Pertwee – “Madam, I am no idiot” – or something like that) but it suits Davison’s Doctor well.

He’s no idiot, but rather like the Troughton Doctor it doesn’t bother him if other people think so.  The Fifth Doctor doesn’t need to be centre-stage, commanding the action, he’s just as happy watching quietly from the fringes.  After seven years of a Doctor who was always dominant, this was a refreshing change.

So after all the toing and froing with the Box (driving numerous men out of their wits) Panna and Karuna have finally managed to reach Todd – the woman who would be able to follow the vision. It seems a bit churlish (but I’m going to do so anyway) to wonder why the pair of them didn’t simply turn up at the Dome and explain in a more straightforward way. But whilst they may not be primitive, it’s possible they’re bound – like everybody else – to operate under certain parameters.

PANNA: It is all beginning again.
DOCTOR: What is?
PANNA: What is? What is? History is, you male fool. History is. Time is. The great wheel will begin to roll down the hill gathering speed through the centuries, crushing everything in its path. Unstoppable until once again
TODD: Until?
PANNA: I must show you. That is why you have been brought here. Then perhaps when you understand, you will go away and leave us in peace. If it is not already too late.
DOCTOR: You said once again.
PANNA: Of course. Wheel turns, civilisations arise, wheel turns, civilisations fall.

Whilst the Doctor’s seeking enlightenment, Adric is stuck with Sanders and Hindle. Matthew Waterhouse doesn’t do badly here, even though he’s sharing the screen with two actors who could run rings around him at any time. But the fact that both Sanders and Hindle are now childlike (Sanders docile, Hindle petulant) means that they fit rather well with Adric, who’s tended to act like a somewhat stroppy teen for most of his time aboard the TARDIS.

Those looking for faults could no doubt wonder why Panna’s projection features Earth-type clocks (although those of a more forgiving nature might decide that the images were drawn from the minds of the Doctor and Todd). Even given the limited budget this sequence is still suitably apocalyptic, although I’ve never quite understood why the episode didn’t close on the spooky close-up of Panna’s face.

Instead it trundles on for a few seconds more, leaving us with a cliffhanger where we discover that Panna’s dead. Which doesn’t seem nearly as dramatic.