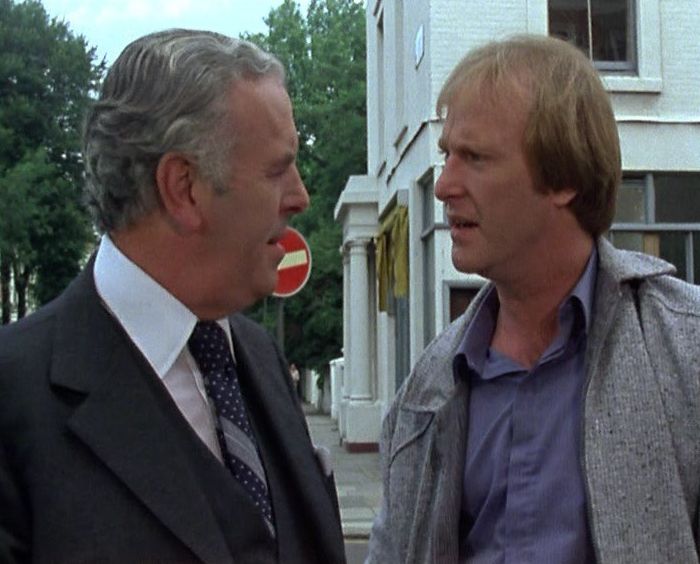 Terry and Arthur’s relationship is put under strain after Arthur attempts to sell Terry’s flat without his knowledge.  Further complications in the property game occur after Vickery (James Ottway) and his granddaughter Kate (Toyah Wilcox) ask Terry to evict several squatters from one of their properties.  But things aren’t as straightforward as they first appear ….

It takes a little while before the plot(s) of All Mod Cons kicks into gear.  First, we have the unusual sight of Arthur playing Space Invaders.  He doesn’t appear to be very good but things change a few minutes later after a couple of passing punters challenge him and Terry to a Space Invaders contest, with a hefty side-bet to make it interesting.

Arthur’s ruthless side is on show after he offers Terry’s flat to McQueen (Michael Robbins).   True, if Terry does clear Vickery’s property of squatters then there’s a flat in it for him, but Arthur’s still motivated by pure self interest here.  And if Arthur is thinking of himself as usual, the more gullible Terry still shows Arthur a degree of loyalty he probably doesn’t deserve.

Terry’s girlfriend Helen (Annette Lynton) works at a swanky nightclub and after Terry, popping by to see her, easily deals with a couple of intoxicated toffs, the manager, Simon (Simon Cadell), has no hesitation in offering Terry a job.  It would mean good money and decent hours, but Terry declines, feeling obligated to Arthur.

It seems that Helen’s been on the scene for a while – plainly long enough for her to have formed a low opinion of Arthur and also to have expressed a wish for Terry to better himself. When Helen asks Terry what he’s going to be doing some ten or fifteen years down the line, it’s interesting that she’s echoing an enquiry made by Penny a few stories back.  “You’ll be older, slower and some young bloke will come along and cripple you for life”.

It has to be said that the well-spoken Helen seems to be somewhat out of Terry’s league and we can assume that Terry’s reluctance to break with Arthur severed their relationship.

Terry sums himself up.  “I’m as thick as two short planks, I’m generous when it suits and as for ambition … a three figure break at snooker would make me a happy man”.  He’s obviously being hard on himself, but there’s a kernel of truth here – Terry seems to have a fear of commitment, meaning that a steady job and a settled relationship with Helen isn’t something he desires, even if many others would.

Michael Robbins (best known for On The Buses of course) is good fun as McQueen, a plumbers merchant with a thriving business.  He’s interested in Terry’s flat for his niece (hmmm) and he’s also able to do Arthur a good turn (“Kevin, can you put Mr Daley’s bidet in his car. Midnight purple”).  McQueen later turns up at the Winchester with his shirt open to the navel, displaying both a generous amount of chest hair and a gold medallion.  Glorious!

When McQueen introduces his niece Shirley (Frances Low) to Arthur and Dave, it’s obvious that Dave knows Shirley.  But the way Dave mutters that he didn’t know McQueen and Shirley were related (and McQueen’s shifty expression) shows the bond they share isn’t a familial one. Further evidence can be heard later at Terry’s flat ….

The other part of the plot – Kate turns out to be collecting rent from the people she’s tagged as squatters without her grandfather’s knowledge – doesn’t quite hold water.  Since Kate turns out not to be the innocent girl she first appears (we later see she has no trouble in recruiting heavies) why didn’t she simply organise her own muscle to evict them?  This does lead to a pulsating fight between Terry and Kate’s heavies though – one of the best from the second series.

When Terry learns that his flat has been sold under his nose it sparks what appears to be an irrevocable split between him and Arthur.  Of course, we know this isn’t going to happen (Minder is a programme that has to hit the reset button at the end of every episode).  The way that Arthur frantically attempts to buy the flat from McQueen is clear evidence of his desperation to win Terry back, but this is another part of the story which doesn’t really work.  Even if Vickery’s property had been renovated and turned into flats, it would have been some time before any were ready for use.  So what would Terry have done until then?

Although Terry accepts a job at the nightclub, Simon’s corrupt ways disgust him and so he resigns.  Therefore after finding that the grass isn’t greener elsewhere he ends up back with Arthur and life goes on just as before.

A few gaps in logic aside, All Mod Cons is entertaining, if not stellar, fare.  But the number of familiar faces present – Michael Robbins, Toyah Wilcox, Simon Cadell, Mike Savage, Tony Osoba and Harry Towb – help to make up for this.