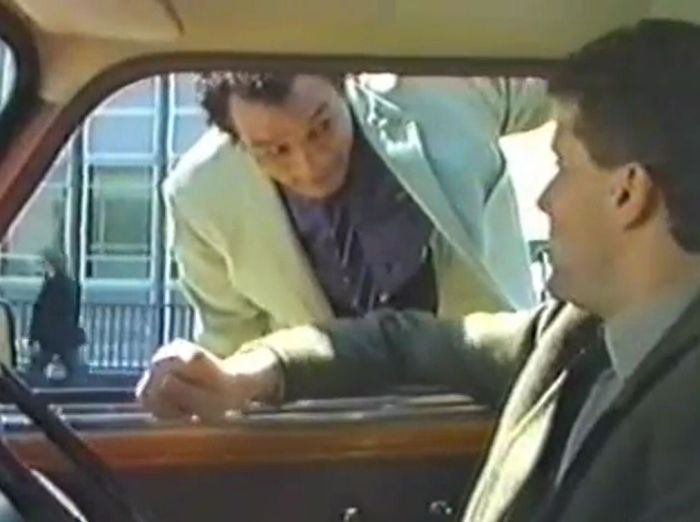 Mr Griffiths isn’t happy with the piles of bottles which are accumulating around the school.  “Mark my words they’ll be broken bottles and tears”.  This point is made seconds later after Mr Bronson reverses his car into a crate of bottles and smashes them.  Oh dear.

The radio room is taking shape.  I daresay that if this episode was repeated today then they’d probably pixilate the prominent poster of Dave Lee Travis.  The common room posters of Gary Davies and Bruno Brookes would be acceptable though.

Ant make his latest appearance, today he’s walking Georgina to school.  He’s not changed since he was a GH pupil – He’s still the same sullen, stroppy person that we grew to love (or not) last year.  It hasn’t taken him long to find his new school as tiresome as his old, although since there’s no Mr Bronson there it’s unclear what his problem now is.

Mrs McClusky stands for no nonsense as she quietens down the rowdier third-formers who are carousing through the corridors.  “I said walk, Trevor Cleaver, not stand still and smirk”.

Mr Scott continues to be a forlorn figure.  His body language as he sits in his orange Mini makes it plain that he’s continuing to fight his nerves.  The way that Mr Kennedy is suddenly revealed at his window comes as a surprise both to him and the audience.  Mr Kennedy makes the point that it’s better if he’s in the classroom before the pupils arrive (he made the same suggestion some time ago) but it seems that it doesn’t work.  Nothing seems to work, which is why he continues to flounder.  Given that Imelda is his main problem (something which is acknowledged by Mr Kennedy) is does seem a little mean that a green, young teacher has been gifted her.

Imelda might be an isolated figure – despised by all her classmates – but she still continues to rule the roost.  But there are signs that they’ve all lost their patience with her (and indeed with Mr Scott) which means that the teacher has to endure the sight of his pupils attempting to restore order, when of course it should be his job.

The question of closed profiles continues to rumble on.  The likes of Freddie and Danny aren’t particularly happy – Danny wonders what would happen if a teacher, who didn’t care for a pupil, decided to write something inaccurate or defamatory.  What checks and balances are in place?  Mr Bronson can’t really answer this and since Danny’s illness became public he’s had to tread somewhat softly with him (which is possibly the reason why he’s now singled out Banksie for special treatment.  Mr Bronson clearly always has to have someone he can needle).

Having earlier given Mr Scott a pep talk, Mr Kennedy then moves onto Mr Bronson.  The older teacher laments Danny’s illness (“young potential wasted”) which surprises Mr Kennedy, who naturally enough believed that Mr Bronson had little time for the boy.  Mr Bronson offers this in reply.  “It is often the most gifted of pupils who kick against the system. It doesn’t make the system wrong or the pupils not worth bothering about”.  A rare insight into the way Mr Bronson’s mind works o a desperate attempt to justify his previous actions?

Hollo and Vince decide that the bottle money should go to Danny Kendal’s fund whilst Ziggy and Robbie continue to attempt to crack the girl’s secret code.  This involves the pair hiding in the hay of Harriet’s stable in order to overhear their conversation.  This is such a brilliant scheme it’s hard to imagine anything going wrong.

Oh wait, this is Ziggy and Robbie we’re talking about, the pair who spent last year atempting – and failing – to gain revenge over Imelda on a weekly basis so of course their great plan is doomed.  It wasn’t too clever for Ziggy’s foot to be sticking out of the hay.

The radio is now set up for a test transmission.  Mr Bronson views the set-up with disfavour and is not backwards in coming forwards to say so.  He can’t resist flicking a few switches and impatiently ignores Miss Booth’s admonition (“I’m not a complete idiot”).  Those are fatal words as you know that the microphone will now be live and their private conversation will be broadcast around the school.  This mainly involves Mr Mackenzie jibing Mr Bronson about the scandal which exists between him and Harriet.  The mind boggles …..

Calley, Ronnie and Jane gain revenge over Imelda.  It’s noticeable how Jane this year has moved back into the centre of things having sat out a large part of the previous series.  And whist the girls are getting messy, Danny’s inspirational message continues to be broadcast around the school.  But the sting in the tale is that his message was recorded as Roland discovers when he finds an unconscious Danny on the radio room floor.

This is the cue for an unusual end credits sequence as the scene of the ambulance arriving and everybody staring anxiously plays out as the titles roll and Chicken Man plays. 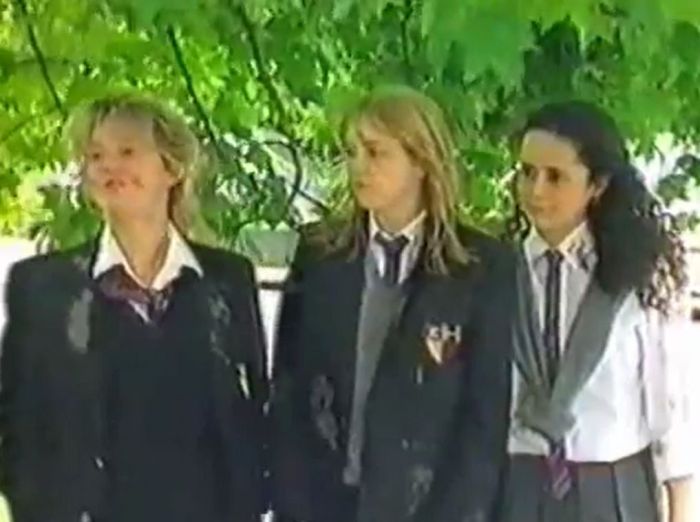