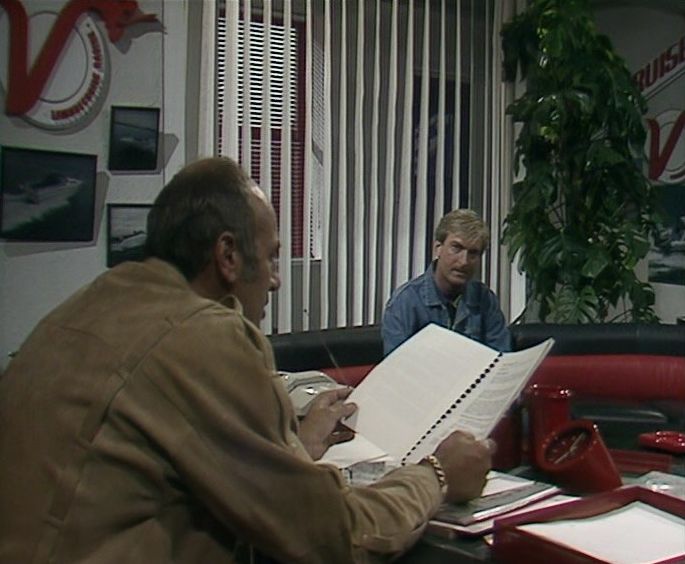 Ace journalist Michael Hanley, now working for Ken at Leisure Cruise, is beavering away on his latest scoop – an expose of Sir John Stevens.   This is another example of Ken’s deviousness – having had his business ventures scuppered once too often by Sir John, he’s now out for revenge.  But rather than do it himself, he’s decided to get Michael to do his dirty work for him.

Michael’s an up-to-date sort of guy, as he’s typing his words of wisdom on a word processor.  The camera briefly lingers on the screen (allowing us to see that he can’t spell whizz kid ….).

This is another example of a HW plot oddity.  If the scandal they’ve unearthed, from 1963, has been buried so deeply, how exactly has Ken been able to piece it together?  Or if the information has been available in the public domain for some time, why has nobody else broken the story?

Another plot weakness occurs after Tom learns that their proposed new yard has already been sold (Sir Edward gazumping his son).  Emma believes this may be a blessing in disguise – since being tied too closely to Charles might inhibit them.  She suggests they buy a new yard with their own money (possibly asking Jack to join them).

But Charles – via Relton Marine – has been involved closely in the day-to-day financial operation of the Mermaid Yard for several years, so it’s not clear exactly why working at a new yard, backed by Charles’ money, would be any different from their current situation.  Remember that the Mermaid was dependent on Relton manufacturing the Barracuda, etc.  Without their support surely the Mermaid would have gone to the wall year ago?

But whilst Tom, Emma and even Jack (who now sees the logic of a second yard) are considering their future, there’s a diversion to enjoy.  Jack’s organised a marine treasure hunt – although he’s a little upset that some (Leo & Abby, Michael & Sarah) aren’t taking it terribly seriously.  Mmm, that’s another thing – at the end of the previous episode Michael and Sarah were established as a couple, but unless I’ve forgotten it, I don’t remember this ever being a plotline previously.  Oh, and Sarah looks really rather lovely when she and Michael are out and about on the treasure hunt.

Sir Edward and Jan have lunch (that restaurant set is getting used an awful lot this year).  He wants Jan to join him and Abby when Hudson Snr comes calling from America.  His reason?  Hudson might be more inclined to let William go if he knew that Abby’s family was extensive – i.e. Jan making an appearance as the Lady Frere to be.  Yes, this seems like just another bare-faced attempt by Sir Edward to force Jan into accepting his marriage proposal, but even he – after she refuses – seems finally to realise that she’s slipping away from him.

They’re all very mature types down Tarrant way.  Later, Jan returns to the restaurant for a drink and a meal with Emma.  Tom is naturally enough the topic of their conversation, with Emma firmly of the opinion that Jan remains the most important woman in his life.  Jan modestly demurs, telling Emma that she’s exactly the sort of person Tom needed years ago – somebody who shares his interest in boats (it was established right from the first episode, this has never been Jan’s forte).  It’s hard to imagine Jan and Avril having such a convivial chat a few years back (or indeed Tom and Ken – the mind positively boggles on that ever happening.  Pity, as it would have been entertaining).

Jan and Polly continue to enjoy an icy relationship.  Jan’s still smarting over the fact that her exclusive haute couture range has been sullied with cheap, mail-order stuff (it’s selling very well and therefore making a tidy profit, but that seems to be by the by).  Poor Polly keeps attempting to build bridges, but Jan’s content to keep twisting the knife – although she eventually proposes a solution.  Polly buys the franchise from Periplus and she can therefore go into business herself (it also means that Jan’ll be shot of Polly, so everyone’s a winner).

This is a great episode for Ken, with two scenes standing out especially.  The first occurs after he disturbs a late night intruder at Leisure Cruise – it’s Sarah, come to find the file about Sir John that Michael’s been working on.  Although she too has an interest in ruining Sir John (it would help to solidify her position at Relton) she has scruples – unlike Ken – so isn’t here for that reason.  She’s more interested in protecting him (and Michael’s reputation too).

Ken’s in full alpha-male mood – grabbing her roughly (by the throat at one point) and generally being incredibly unpleasant.  These are the moments when the real Ken Masters surfaces.

He may be smartly suited the next day, when he and Sir John meet for lunch (yes, once again we’re back in the same restaurant – one day I’m going to add up exactly how many times it featured this year) but scratch under the surface and nasty old Ken’s still there.  Sir John is his usual affable self and is little more than mildly amused at Ken’s attempt to blackmail him (Willoughby Gray plays the scene excellently).

If Ken was expecting his dinner guest to be cowed into submission then he’s disappointed – Sir John tells him to “publish and be dammed” leaving Ken with much to ponder (and a decent end of episode close-up for Stephen Yardley).