Skip to content
HomeDoctor Who – The Daleks. Episode Seven – The Rescue 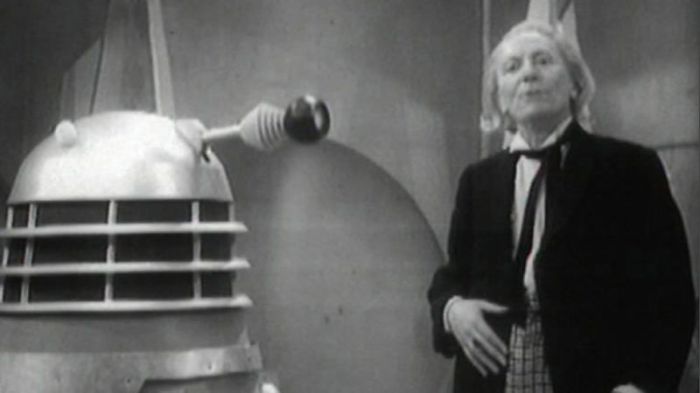 The literal cliff-hanger from last time saw Antodus fail to jump the ravine – which means he’s plunged down a bottomless cavern and Ian (tied on the other end of the rope) is slowly losing his grip on him.  There’s something rather casual about this sequence – why Ian doesn’t call for help from the others?  And even when Ganatus does pop up, neither of them are very quick to twig that a little more assistance would be a good thing.  With Kristas and Barbara also holding onto the rope they should have been able to pull Antodus up.

As it is, Antodus settles the matter by cutting the rope and plunging to his death.  This is a moment that can be taken several ways – was it a noble act of self sacrifice (saving Ian’s life) or did Antodus (who was convinced they’d all die) commit suicide because he didn’t have the nerve to carry on?

Although Ian tells Ganatus that his brother died to give them a chance, it’s not really a credible statement.  Alydon and the rest of the Thals just seem to stroll into the Dalek City, which makes the efforts of Ian, Barbara, Ganatus and Kristas seem somewhat futile (why make all that effort to gain access via the caves when they could have just walked in through the front door?!)

Meanwhile, the Doctor and Susan are prisoners of the Daleks.  Hartnell has a great line – “this senseless, evil killing” – which helps to give the Doctor a sense of morality that hasn’t always been present in the episodes to date.
The climax of the story is a little bit of a damp squib – the Daleks’ control room is invaded by the Thals and after the briefest of battles the Daleks all die.  Their power has (somehow) drained away, exactly how is never really explained.  After seven episodes it would have been nicer to have a more considered conclusion.

In Nation’s original draft, it was revealed that a third party had engineered the war five hundred years ago between the Daleks and the Thals for their own benefit.  This mysterious alien presence then returns to Skaro and the Daleks and Thals team up to destroy it.  Although the televised ending is a little abrupt, I certainly prefer that to the original draft which poses more questions than it answers (why did the aliens decide to return to Skaro after so long?)

Hartnell’s Doctor has another small, defining moment. “I might just say this to you. Always search for truth. My truth is in the stars and yours is here.”  It’s character scenes like this where Hartnell really excels.

So if the conclusion is a little disappointing (as is well known, Terry Nation wrote the seven scripts very quickly – for him it was just another job.  “Take the money and fly like a thief”) then there’s still enough memorable moments from the earlier episodes to always make this a rewarding rewatch.