It’s surprising that Ronnie and Gonch’s on-off relationship still seems to be just about on (I’d have assumed she would have dumped him by now). It’s the same old story from last year – she’s constantly exasperated that he never shows her any attention (mini-mogul Gonch is too concerned about where his next fortune is coming from).

Calley’s interest in all things astrological is still one of her main character traits. This has been constant since she first appeared in 1985 – which is either decent continuity or a sign that, as yet, nobody’s been able to think of anything better to do with her. Her latest fad is reading bumps – although Jane suddenly becomes less keen to be her guinea pig after Ronnie acidly tells her that it looks as if Calley’s checking for nits ….

Vince is always keen though (and keen to believe) so when Calley tells him that his bumps suggest he’s due a close encounter with something or someone from America he swallows it hook, line and sinker. Calley isn’t being deliberately malicious – it’s simply that other people’s expectations are greater than her own competence. And what does Trevor think of it all? He’s not impressed.

Although Vince and Trevor briefly teamed up in the first episode, they’ve now regressed to their more combative S10 personas – with Trevor keen to ridicule Vince at every opportunity. But some of Trevor’s sting has been drawn by the arrival of Mr Robson (a teacher that he finds impossible to bait in the same way as Mr Scott). This episode Trevor has regained his posse of silent hangers-on. He briefly had a similar in the previous series, but they vanished after an episode or two.

Helen and Georgina had a brief walk-on appearance in episode one, but this is the first time this series that we’ve been able to get reacquainted with them. Imelda might be long gone, but the remaining members of the Terrahawks still possess a sense of mischief (albiet playful, rather than malicious). Georgina dares Helen to tell Mr Bronson the true reason why her homework is incomplete (she was watching a good film starring Clint Eastwood) and Helen duly obliges. This scene was an obvious gift for Michael Sheard – the way that Mr Bronson slowly and unbelievably repeats the words “Clint Eastwood” are worth the price of admission alone.

Helen then dares Georgina to drop something into the lunchtime baked beans. She duly obliges with a bottle of salt and the inevitable hilarity ensues when some Louise later asks for beans and is less than impressed with her salty fare.

Ziggy and Robbie, like Gonch, are strapped for cash – so Robbie suggests a merger. Neither Ziggy or Gonch are keen, but eventually they agree. With three great business brains now working together in perfect harmony, what can possibly go wrong? Let’s wait and see.

Madeline Church makes her first appearance as Miss Stone, a fairly background teacher who appears throughout this series and a few episodes of the next. Miss Stone is keen as mustard to join Mrs Reagan’s keep fit class, whilst Mrs McClusky and Miss Booth are far less enthused (although eventually they’re shamed into attending). Gonch, Ziggy and Robbie – already debating how to make their first fortune – decide to stay in the gym and spy on them.

This is an odd little scene, although it doesn’t seem to be that the boys are perving (they’re simply being mischievous, I think). Their wonderful hiding place? Inside the vaulting horse, of course. Everything’s going swimmingly until the teachers leave and Mr Griffiths locks the gym!

The school disco is still going and there’s a sense that the series is attempting to keep up with the times when Ronnie asks the DJ to pop a hip-hop track on. This meets with the approval of Fiona (Michelle Gayle). From small acorns to the birth of Fresh ‘n’ Fly. The Hip-Hop advisor for the series was the late Mike Allen, at the time a DJ on Capital Radio.

Mr Griffiths is supplied with some top comedy moments – baffled at Calley’s head readings (convinced that she’s checking the others for nits), grumbling at the way his screwdrivers keep getting pinched and (of course) pursuing Gonch, Ziggy and Robbie around the school. He seems to have forgotten that he and Ziggy were allies last year, meaning that they’ve slipped back into their old roles. 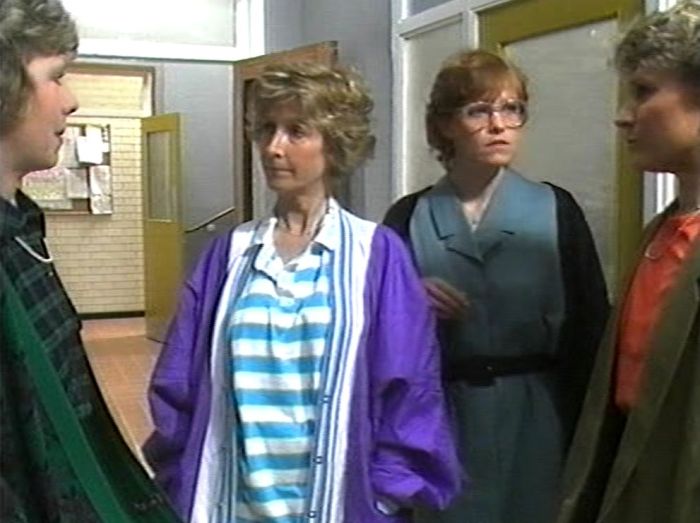