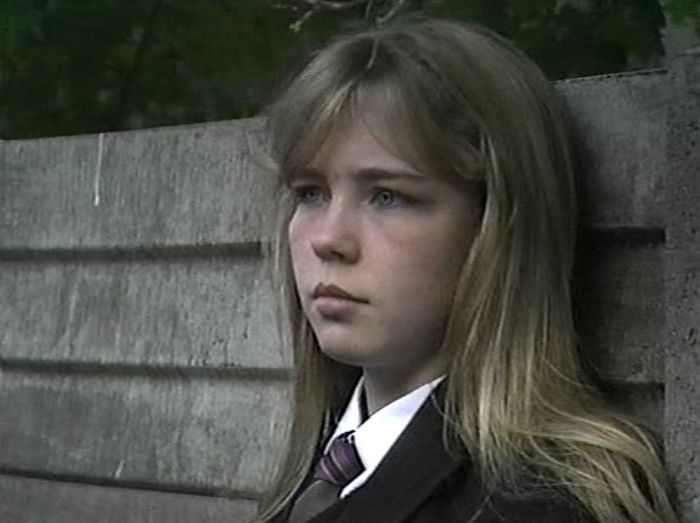 Ronnie isn’t one of life’s natural conspirators. This is made plain after she discovers her mother anxiously looking for something. The money which Ronnie pilfered? No, a nearly overdue library book. Crisis past for now, although Ronnie’s still giving off anxiety and guilt in waves ….

Her isolation is restated minutes later, after she’s cast in the role of a silent observer – watching Gonch and Fiona walking by, gently flirting. It seems a little strange that Gonch – who’s barely exchanged a handful of words with Fiona all year – would decide to chat her up, but it serves the purpose of darkening Ronnie’s mood just a little more.

She explains her dilemma to Calley, who’s sympathetic, but unable to offer any practical advice. Calley’s got her own problems to contend with – the revelation that she’ll need to wear a brace depresses her enormously.

I’m delighted to hear that the strip hire business has been wound up. Hurrah! Another entrepunerial sideline is launched after Chrissy and Susi decide to sell badges with real fruit on them. Yes, really. This odd minor plotline does through up a few nice character moments with the teachers – Mr Bronson is less than sympathetic to hear of their debate as to whether the olive is a fruit or not (although he later pops into the library to secretly look it up!) and kindly Mr MacKenzie (now fully recovered from his hissy fit a while back) is gently amused when Susi declares that they should make him a badge with a leek on it. He suggests that a thistle might be more apt ….

Once again we see Matthew running like a hare from his father’s car. Despite this, he’s late to Mr MacKenzie’s registration (not entirely sure why as it’s not made clear what he’s been doing). Mr MacKenzie casts a slightly concerned glance his way whilst later, Miss Booth also picks up that things aren’t quite right. Although he’s been acting in an off-key manner for a while, it doesn’t seem to be something which the staff have picked up on until this point and it has to be said that they’re rather slow in doing anything about it.

The slow torture of Matthew’s life continues after we see him, extremely unwillingly, undress for gym. Several vicious looking welts on his back tell their own story (one which probably wouldn’t have come as a surprise to many, since it seemed a while back that the story was heading in this direction). Later we see him unable to get into his house (his father is out a meeting and he tells Clarke that he’s lost his key). As so often with Matthew, it’s possible that he’s not telling the whole truth. Has his father has denied him a key? The meeting part of the story might also not be true, unless the meeting was an alcoholic one ….

A staffroom scene allows us to take a look at some of the posters on the wall. Fair Pay for Teachers is an obvious one (remember this was the 1980’s, when teacher’s strikes were very common) but it’s slightly more eye-opening to see a CND poster. It’s not commented upon, but again it helps to anchor the series very firmly in a specific period.
Mrs McClusky hasn’t really featured for a while. She briefly pops her head round the staffroom door – only to have her ear bent by Mr Bronson – but just as quickly disappears. It’s a shame that Gwyneth Powell has been rather underused this year – there would have been plenty of dramatic mileage in setting Mrs McClusky and Mr Bronson at loggerheads over the best way to run the school (although maybe it was felt that this plotline was exhausted last year).

Helen’s tattoo woes continue. Now that her mother’s found out, it simply makes her all the more anxious to get rid of it (but using a scrubbing brush isn’t going to do the trick). She cuts a teary and forlorn figure, but luckily Miss Booth’s on hand to offer some common sense advice. It’s rare to see Helen quite so exposed – her normal image is strong and assured – but the tattoo seems to have stripped away her normal acerbic defences, leaving her vulnerable and childlike.

If Matthew’s storyline has suddenly picked up some traction, then so has the question of Simon. Louise spills the beans to Laura about Simon’s mauling of Julia, which leaves her with a dilemma. Should she tell her mother, and even if she did, would she be believed? 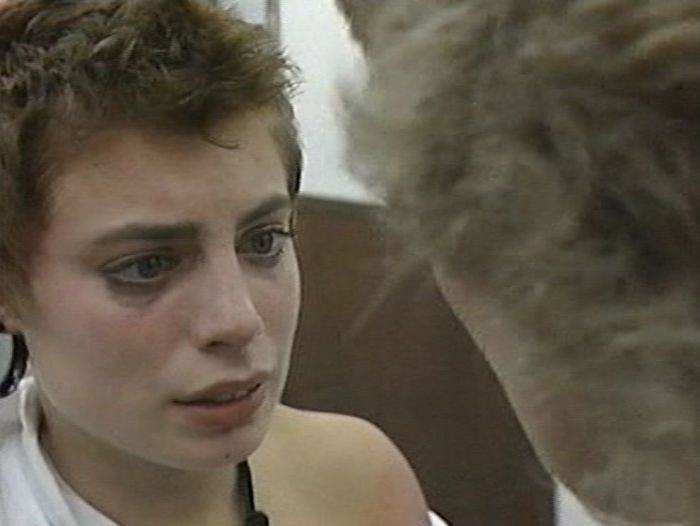