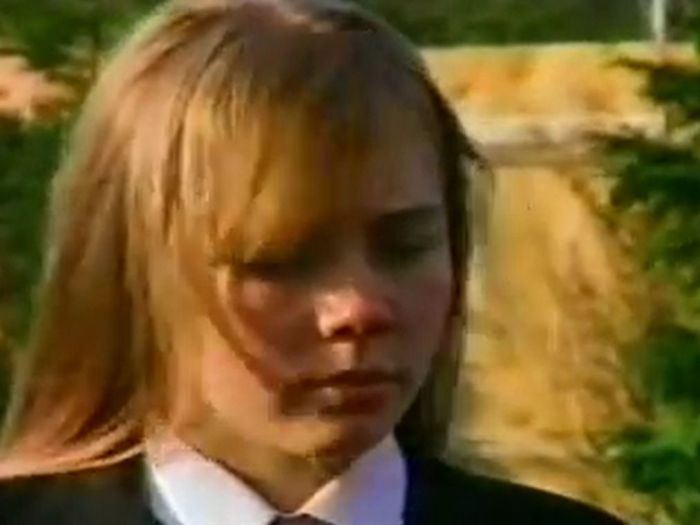 The episode begins with Ronnie and her parents at the police station, all anxiously waiting to hear what her fate will be. It’s the first time we’ve seen Mr Birtles (and he only appears once more, during series twelve). He’s played by Geoffrey Beevers, which helps to gladden my heart. Beevers is one of those actors who – although never the star – enriches any production he appears in. His credits are far too numerous to mention, but it’s a fair bet that if you’re watching a British television serial or series from the seventies onwards, he may very well pop up at some point.

The bleak institutional nature of the station helps to create a sense of tension. Director John Smith chooses to raise the camera high during the scene when Ronnie and her parents are walking down the corridor for their meeting. It’s an interesting move by Smith, who also directed the previous episode (there, he kept the camera low at the moment just before Helen and the others discovered what punishment they would receive). This birds eye view works just as well though – especially since Ronnie is positioned at the rear of the set and therefore seems somewhat diminished in size. Even the friendly smile of the policewoman escorting them can’t remove the faint feeling of dread.

Another very familiar actor – Ken Sharrock – plays the Inspector. The Inspector is remorseless in driving home to Ronnie just what a terrible crime pinching a jumper from Miss Selfridge is. He may be laying it on a bit thick, but the moral tone of this scene was obviously designed to operate as a PIF for those watching at home. If you stray from the straight and narrow then you too might find yourself at the police station, being lectured by a stern policeman.

The only odd thing about this plotline is that it sits alongside Tegs’ misadventures this year. Here, it’s hammered home that any crime is serious (after much deliberation, Ronnie is issued with a caution) whilst elsewhere we saw that Tegs regarded petty villainy as a perfectly normal part of life. Maybe this juxtaposition was intentional, but if so then it doesn’t quite work for me.

After Ronnie returns home (having faced the wrath of her father – he’s painted as a slightly ineffectual character, which means that possibly his only release is via angry outbursts) we then see a very unusual camera shot as Ronnie talks to Gonch on the phone. It’s a split screen effect, although since there’s not an actual split on the screen Gonch appears to be hovering in a ghost like fashion above her ….

Whilst some of the storylines this year (Mauler McCaul and the Grid Iron Crew, the interminable saga of the kit hire business) have been less than enthralling, Ronnie’s travails have been by far the most engaging. Tina Mahon took the material she was given and ran with it (a pity that post GH she appears, apart from a few credits, to have dropped out of acting).

The moral tone of the episode continues when we see Helen lectured by a doctor about the hazards of tattoos – specifically the danger of dirty and infected needles. Helen’s complete and utter revulsion about her tattoo (she’s distraught when she learns that laser removal is impossible and that a skin graft would leave a noticeable scar) is one of those moments which would probably puzzle a modern audience. Would the children of 1988 have shared Helen’s disgust?

Calley continues to obsess about her brace. And her obsession is now so severe that it causes her to completely forget that her best friend Ronnie had faced her day of destiny at the police station. Some friend. If Ronnie’s been gifted with a good storyline this year, then Calley hasn’t been so fortunate.

Will Grange Hill beat St Joes in the semi final? Hmm, not really bothered. The highlight of this scene is the three way conversation between Mr Bronson (who demonstrates a firm grasp of football tactics), Mr Griffiths (who reminisces about the time England won the World Cup as well as the Chinese meal he enjoyed with his good lady wife afterwards) and Mr Robson, who’s caught in the middle. Lovely stuff.

There’s a very rare mention of teacher’s strikes in the aftermath of GH’s semi final defeat (awww). Freddie is convinced that Mr Robson’s non-competitive system had torpedoed their chances of retaining the cup, although one of his teammates mentions that the numerous strikes (all of which have happened off screen) didn’t help. Freddie continues to chunter away – not even Louise’s comment that to be a good sport you have to be gracious in defeat seems to penetrate his ultra-competitive shell. I can’t confess to being too sorry that he’ll disappear after the next episode.

The on-going saga of Mauler’s comeuppance makes an unwelcome return here. This involves Robbie filling up a bin with water (which he naturally manages to mostly spill over himself). Ziggy and Robbie do manager to deliver this watery treat effectively though – which is the cue for yet more terrible overacting from Mauler and his crew.

Gonch and Ronnie arrange a blind date between Robbie and Calley, but they leave it to Trev to speak to Robbie. And of course, he tells Vince instead. The sight of Vince in his best suit with a bunch of wilted flowers attempting to woo a clearly unimpressed Calley is nicely done. But she’s kind-hearted enough not to bolt at the first opportunity, and so the pair set off for the cinema ….