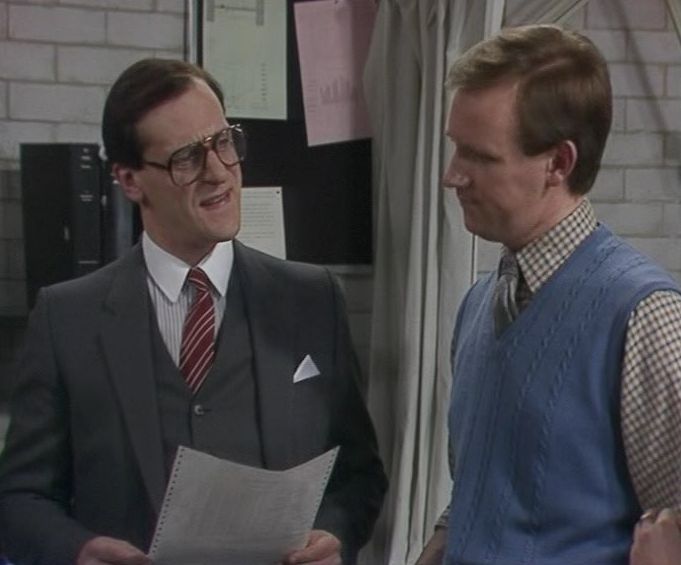 An old school friend of Bob’s, Jimmy Partington (David Gwillim), is able to put a potentially lucrative consultancy deal his way. Jimmy, now working for Hamburger – a major international pharmaceutical company – wants him to trial Confidan, a wonder drug that can cure just about any ill.

And with Jock under pressure from the Vice Chancellor, this could be just the sort of thing to prove their worth. Bob ropes Stephen in and the pair start to prescribe the drug (Stephen as and when required, Bob to anybody who walks through the door). Everything seems to be going swimmingly, until ….

Black Bob’s Hamburger Suit is, as the title suggests, a Bob-centric episode. This is a very good thing. Given a little more time and space, David Troughton is able to flesh out the character of Bob Buzzard very nicely. We start by dropping in on his home life (a swooping camera pan across a number of expensive-looking, but identical houses). After a few hurried and angry words with his wife, Daphne (Kay Stoneham), he’s straight into his car. His first job is drop his boys, Ollie and Simon, off at school.

Diminutive and bespectacled, they decide that daddy is in one of his rages. The way that Bob drives – aggressively and fast – suggests this is so, however much he denies it. His children don’t seem to have a very happy school life – duffed up by the boarders who refer to them as double-glazing salesmen. No doubt this is due to their impressive briefcases – gifts from a prestigious multi-national drugs company.

Bob is clearly happy to receive trinkets like this (as well as an expensive new suit of which he’s very proud) but until he meets Jimmy he doesn’t seem to be aware that further rewards could be his. Not only money, but a trip to Bermuda possibly. Only for him of course, no room for Marjorie. Delightfully this doesn’t seem to concern him that much. His off-hand comment when Jimmy asks how Marjorie is (“oh she’s all right I suppose”) is nicely done.

Bob, for all his aggressive outer shell, is little more than a child. Unlike the more machevilian Rose Marie, he doesn’t view Stephen as a threat (on the contrary, he invites him to join the Confidan project). And with everybody urged to develop papers or topics, Stephen – with nothing on hand – agrees with alacrity. Jock is working on a new book – The Sick University – whilst the ever industrious Rose Marie has dozens of projects to choose from.

Jock’s frequent asides into his tape recorder (as he compiles material for The Sick University) is an episode highlight. It causes some of his patients to run away although others are built of sterner stuff. “A typical consulation in the sick university. All is the same, all is new. One face, one body, taken at random from the long procession of pain. This is a young man. The unlined, greasy, pustules skin denotes innocence and ignorance. But then the eyes meet the eyes of the doctor and everything is changed, changed utterly. In that moment of acknowledgment, a shared mortality in which each symptom inscribes itself as an ideograph of the inevitable death that is all we humans share”.

And the pay-off? The young man’s come to him about his piles …

There’s yet another incredibly awkward conversation between Stephen and Rose Marie. She once again turns on the full power of her considerable sexuality to discomfort him (I love the production detail that plastic nipples were sown into Barbara Flynn’s costume – thereby ensuring that Rose Marie proved to be just that little more distracting at all times!)

When Rose Marie leans in even closer to tell Stephen that she finds him attractive, there’s another lovely touch from Davison as he swallows nervously and clears his throat. Once again, he’s mainly reacting, but it’s still done very well. It hard to take your eyes off Flynn though – the way she doesn’t break eye contact, how she uses her hand to draw attention to the points she’s making – it’s another masterclass in allure.

Rose Marie has come to tell him that he really should claim joint ownership of Bob’s paper. As we’ve already had a faint suggestion that there’s something wrong with Confidan, this is obviously another of Rose Marie’s manuvoures designed to embarrass and weaken her colleagues. There’s a very interesting cynical line reading from Davison late in the scene (“as a colleague and a friend?”) that seems to suggest he’s aware that Rose Marie is playing him, but this doesn’t seem to be as scripted as afterwards Stephen goes on merrily assisting Bob.

Both Bob and Stephen are presented somewhat as innocents. Lyn’s the one who suggests they set up a control group – supplied with a placebo – so their results can be compared against those prescribed Confidan. Stephen reacts in wonder at this (“that’s brilliant”) whilst she considers it to be simply common sense.

Lyn’s a constant presence throughout the episode. Whether she’s slowly drawing out Stephen’s confidence (first with a kiss and then by sharing the same bed) it’s plain that a great deal of his new-found resolve comes from her. The fact that he’s beginning to fall in love doesn’t please her though. She likes him a lot, but she also has interests elsewhere.

Bob’s noticed the change in him, approvingly putting it down to his “totty” (“she’s not my totty” Stephen weakly replies). Daphne refers to her as a “tart” and is highly undelighted that Bob’s invited her and Stephen to Sunday lunch. Daphne’s so utterly horrible during the scene where she and Bob are discussing the upcoming lunch, that it does shine a little light into what may be a fairly wretched home life for Bob. But when he plaintively asks Daphne if she actually loves him (again, a very child-like question) she does cease her sniping and responds to him as a mother would to her son.

Stephen and Lyn are left alone with Ollie and Simon while Bob and Daphne argue in the kitchen. The boys keen them entertained with a rundown of the terrible people their daddy has to work with. “The mad old fart and the uppity dyke. And the wet liberal. He’s so wet you could shoot snipe off his back”.

It’s no surprise to learn that Confidan has a major flaw (nothing serious, but it causes a nasty ear inflammation) which means that Bob has to reluctantly file a negative report. Stephen berates him over the fact that he already knew an American trial was similarly affected, but Bob weakly responds that he was assured the problems had been fixed. After all, if you can’t trust a major international pharmaceutical company who can you trust?

Black Bob’s Hamburger Suit has always been a favourite, thanks to the way it puts David Troughton front and centre. He seems to relish every line and delivers them perfectly. There are a number of stand-out scenes, but one of most memorable has to be when Bob – making an early start – discovers Jock attempting to hang himself (a bleak moment, albiet dealt with in a comic way).

After Bob is told to go away he does, all the way to his office. There’s a few exquisitely timed beats until he wheels around and returns to Jock. He then tells Jock that he shouldn’t really kill himself. Instead he prescribes him a course of Confidan …. 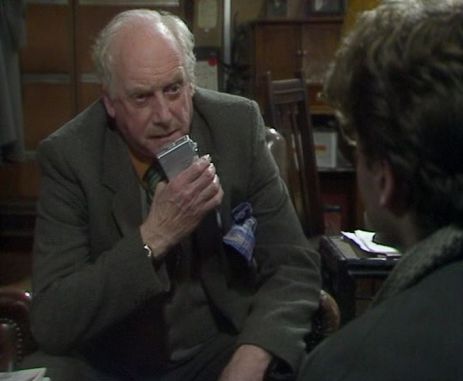 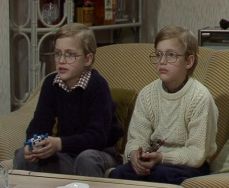 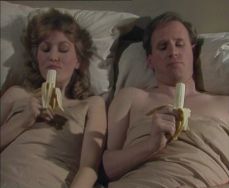 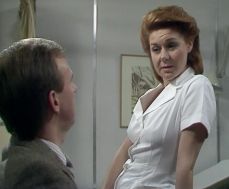 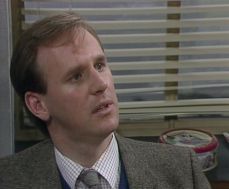 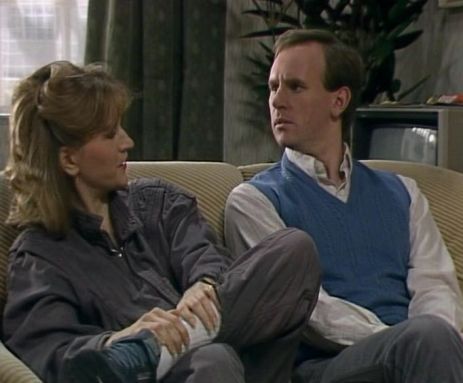