Bill is a wise old bird. His comment (“Tarrant breeds quarrels, every day someone’s having a barney”) sums up Howards’ Way perfectly.

So who’s arguing today? Charles and Gerald for one. Charles’ inability to cease fighting his father (even after his death) is the bone of contention between them. Psychologists might have a field day with Charles’ decision to move into Highfield – is this because he wishes to exorcise the ghost of his father, or will he in due course turn into him? One shot – Charles in the foreground with a painting of Sir Edward looming in the background – seems to be a very deliberate framing.

The ever patient Gerald has clearly reached the end of his patience quota as the episode ends with him tendering his resignation. We’ve been here before of course, but maybe this time he really means it.

Their scenes are possibly the dramatic highlight of an episode that chugs along quite agreeably, even if it never quite clicks into top gear. Abby’s still looking mournful as she considers her future. Leo doesn’t feature a great deal, but in one way that’s understandable (Abby wants to make the decision for herself). So Leo is cast in a passive role, having already made his position quite clear (he wants Abby to stay, naturally). Unsurprisingly he takes her out on the water to explain this – important decisions have to be discussed when you’re bobbing up and down in a boat.

If this plotline is currently in a holding position, then the unlikely romance between David and Laura already seems to have run aground. As touched upon before, it’s hard to take this coupling at all seriously (given how limited David’s screentime has been) but it really does appear that hard-bitten Laura has fallen for him. So when a gloating Ken tells her that David and Avril are in Malta she’s not best pleased. Score one to Kenneth Masters.

Tarrant currently seems to be stocked with people who aren’t quite who they appear to be. Last time a young lad called Tony Munro (David Rhean) started working at the Mermaid, today Jack finds him rifling through the files. And following the departure of Sir John from the bank, Jan is stunned to find that Robert is now on the board.

There’s not enough data yet to explain Tony’s actions, but Jan may simply be getting a little paranoid about Robert. Her main criticism of his actions is that he’s constantly business minded (not a bad trait for a business adviser). He’s keen to cultivate Lynne’s support – business again, or does he also have pleasure in mind? Jan registers her concern by pulling a series of anguished faces. Jan Harvey was always very good at this.

Continuing the theme of untrustworthy types, questions are beginning to be asked about David Relton. Like his whirlwind romance with Laura, the subplot between him and Avril is begun and concluded so quickly that it simply isn’t credible. For these storylines to have any impact (or believability) David needed to be in place for a run of episodes (appearing in only three was never going to cut the mustard).

Avril and David are in Malta to meet with Pierre Challon (Michael Cochrane). Pierre sports the most outrageous French accent heard in the series since the late, unlamented Claude. But the twist – which by now most of the audience would have probably seen coming – is that he’s a con man putting on a funny accent (was this a tongue in cheek nod back to some of HW‘s comedy accents of the past?) So David and fake Pierre have conned Avril out of a quarter of a million pounds. This doesn’t say much for her business acumen, but as per the point raised before, had David been around Tarrant longer then her blunder would have been a little more more forgivable.

Elsewhere, Jack teases Laura that he’s going to ask David to be his best man, rather than dependable old Bill. Jack was only joshing of course and later he and Bill – along with Leo – enjoy a jolly evening at the Jolly Sailor (Jack counting down his last precious hours of freedom). By the end of the evening both Leo and Jack are quite insensible. How Bill managed to get them home is anybody’s guess ….. 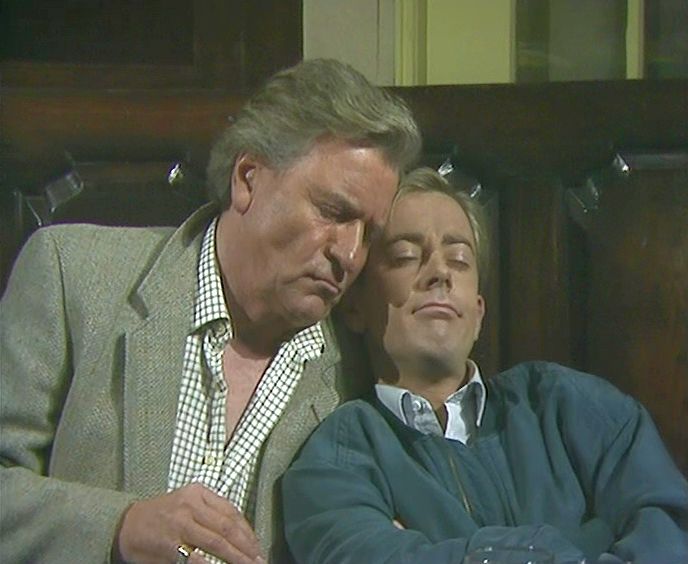