The shockwaves of David Relton’s departure continues to reverberate. Of course this is old news for the viewers, who’d already been presented with evidence that he was a crook last time, so today is more a case of watching the likes of Laura and Avril catch up.

Laura (sporting a new hairstyle) is the first to twig. Orrin doesn’t do a great deal in this episode, but what he does – politely hammering the point home that Laura was somewhat foolish to trust David – he does very well. So not only has Laura had her heart broken (I won’t mention again how hard this is to swallow) she’s also lost a considerable sum of money.

Avril at least has the compensation of not being unlucky in love, but the way she frittered away £250,000 of Relton’s money is understandably giving her the jitters. I’ve touched upon this point before, but in the early days of Relton Marine, combative boardroom scenes were quite common. These have totally disappeared over the last few years, leaving the unfortunate impression that Relton Marine is only run by Avril and Leo. It’s difficult to fathom why they went down this route, as feisty boardroom battles seem to be an obvious way of generating drama.

Speaking of generating drama, this episode has the rather annoying habit of stopping scenes just before a juicy revelation arrives. So we see a meeting between Gerald and Avril, but it ends before the key moment (Avril offers Gerald a job). Given that “show not tell” is a basic storytelling rule, this seems odd.

One notable moment occurs when Avril desperately attempts to find Vanessa, keen to break the news that her long-lost brother is a cheat and a crook. Considering that Vanessa’s getting married in the morning you have to say that Avril’s got a slightly skewered sense of priorities. It falls to Jack (for once the voice of reason) to tell his daughter that it’s best to say nothing for the moment.

Entertaining though the sight of Laura and Avril’s woebegone faces are, there are two key aspects to this episode – Abby’s choice and the wedding between Jack and Vanessa.

Abby’s choice is certainly something which continues to generate debate whenever grizzled HW fans meet. Maybe her endgame is regaining custody of William, which explains why she’s keen to abide by the provisions of Sir Edward’s will (even if it means cutting Leo out of her life). Or, as Kate believes, is it simply that she’s changing into a new person? If power and money corrupts, has the prospect of untold wealth already begun to warp her persona?

There’s an absolutely key scene (played out to Talk Talk’s Life What You Make It) in which Abby peruses various high-end shops, eyeing a complete makeover.

The arrival of the new improved, power-dressed Abby comes as something of a shock. It’s certainly a world away from the lumpen fashions we saw her modeling during the first series. It appears that her reclothing has created a shell which will steel herself for the battles ahead (behind the glossy new exterior she’s still somewhat hesitant). As Abby passes Leo his ring back, it’s plain that she’s now made her choice ….

Earlier, Charles had vainly attempted to persuade her that his decision to contest his father’s will was in her best interests. Abby (and later Gerald) disagreed, but the truth isn’t so clear cut. We’ve seen so little of Charles the man (as opposed to Charles the marina development businessman) that it’s hard to believe he isn’t operating with an ulterior motive, but maybe, just maybe.

The brief meeting between Charles and Lynne was a poignant one. Not only in story terms (the pair had a brief fling at the end of series one) but also due to the fact that Anholt and Childs married around the time that this series was in production. Sadly they divorced in 1998.

Abby’s decision to walk away from Leo casts something of a pall over Vanessa’s last night of freedom (the likes of Jan and Lynne are keen to discuss the ins and outs, before realising that it’s rather tactless to gossip about a failed relationship just as Vanessa’s about to tie the knot) but the big day goes off without a hitch. It’s all really rather lovely and even this hard-bitten television watcher had to confess to getting a little misty eyed. Jan’s dress was rather dramatic, I wonder if she designed that one herself? 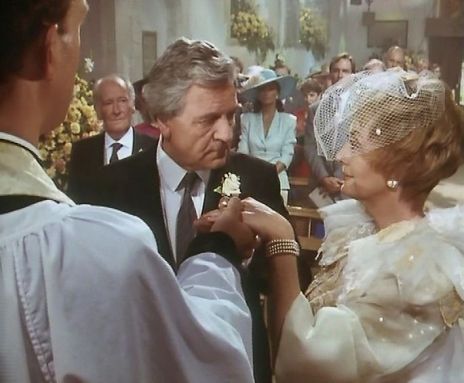 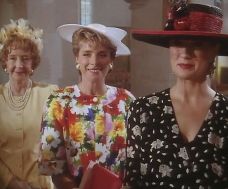