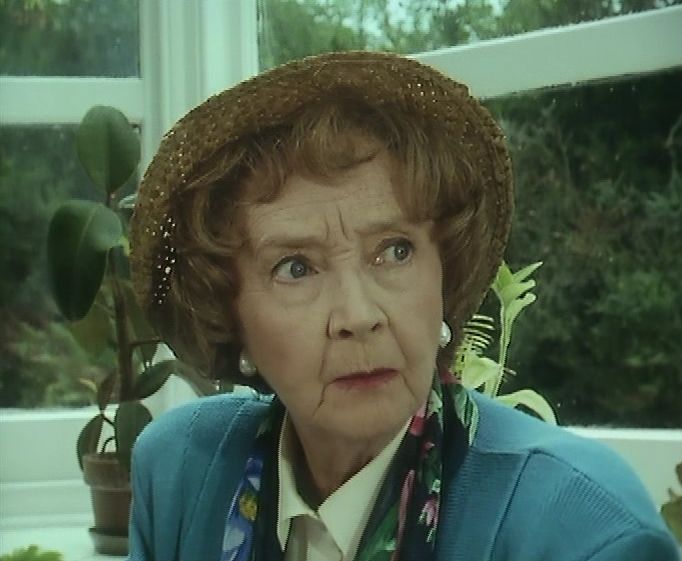 There’s another example of “tell not show” at the beginning of today’s episode. Kate, indulging in a spot of pruning, sees two police officers approaching. The scene ends before we learn what they want and indeed we don’t hear a peep out of Kate for the next fifteen minutes – not until a horrified Jan answers the phone (although we’re not privy to the other side of the conversation).

A brief moment of tension is therefore created, but it’s instantly dissipated as the next scene shows Jan and Kate leaving the police station. A recent burglary at the Mermaid Yard has implicated Kate (connected to the documents she assembled last year when launching her abortive attempt to save the yard). It’s not really anything to worry about then – Kate isn’t set for a diet of bread and water – but you do feel that a little more could have been made out of this moment.

The burglary seems to be linked to the new chairman of the bank, Admiral Francis Redfern (Michael Denison), who – as we’ve previously seen – is an old friend of Kate’s (was the break-in an attempt to smear his name?). The urbane Francis (like so many before him) is forced to feel the rough end of Kate’s tongue for a few moments – although she’s mollified to learn that his position at the bank might mean a smoother ride for Jan in the future.

It’s highly characteristic that Kate automatically assumes they’ve now got a friend at court, although Francis is quick to point out that any support he can offer is dependent on Jan’s business proposals ….

Leo and Abby have a short, unhappy conversation which ends with Abby giving him a hard slap (this occurs after a taunting jibe that her only values are now monetary ones). Gerald also shares this disquiet, but he remains publicly supportive. It does seem now that she’ll meet with anybody – Orrin or even Ken – who will be able to help her achieve her ultimate goal. Mind you, given that HW was often said to embrace the Thatcherite ideal (even though 1990 were the dying days of Thatcher’s premiership) she’s not doing anything that many others – such as Jan – haven’t previously done. But is it about the money or is it about regaining William? Others have their opinion, but only Abby knows for sure.

Charles and Gerald arrange their parting. As with all of their business dealings, it’s handled in a straightforward and correct manner – although it’s notable that Charles seems to be the one with the most regrets. He once again states that his decision to contest his father’s will was in Abby’s interests and there’s something in his pleading tone which makes me inclined to believe him. You possibly won’t be shocked to hear that Gerald later takes up a position at Relton. With Gerald and Avril now on the same side, this sets up intriguing possibilities for the future (or would have done, if the series wasn’t hurtling to a conclusion).

Jack and Vanessa’s honeymoon hits a little bump when she learns the truth about her brother, but things soon get back on an even keel. The fact that Vanessa is keen to reimburse both Laura and Avril the money they’ve lost (well over half a million pounds) clearly suggests that she’s a woman of considerable financial means – but if she did so it would close off another area which could be mined for drama.

Although Laura puts a brave face on her loss (telling a gloating Ken that losing £300,000 is inconvenient but not disastrous) it may be that she’s not being entirely truthful. Hitting the reset button thanks to Vanessa would put us back to square one and negate the whole David Relton plot-thread. Let’s keep an eye on this one.

The mysterious Tony continues to mooch around the Mermaid, throwing knowing looks at regular intervals. This is a plot-thread which has been given time to breathe, but I think by now it’s been as stretched about as far as it can go. But alas, we still don’t know the truth about him, so it’ll rumble on for at least another episode.

Lynne’s not had a great deal to do so far this series. Most of her scenes have been with Jan and Robert and have played out in the same way (Jan and Lynne attempt to push their business ideas forward, the ever cautious Robert hums and haws). This episode does do something more with her though – first, she and Leo venture out on the water as she attempts to heal the breach between him and Abby.

A later encounter with Charles is even more intriguing. That the flame still burns between them is suggested when they kiss (although she pulls back after a moment). Given that their previous fling was brief and ended rather unhappily (with Lynne taking an acrobatic plunge into the water) it seems a little improbable that they would simply pick up where they left off after a gap of several years.

But this is Howards’ Way, where the improbable often becomes probable, so never say never ….