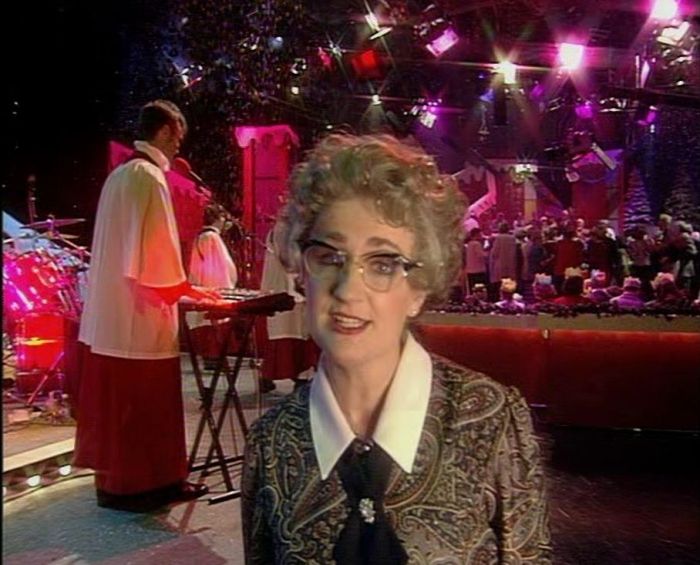 Following a couple of pilots (the first on ITV and the second on the BBC) the series proper of The Mrs Merton Show began airing in early 1995. Clearly it did well, as the second run started later that same year and culminated in this Christmas Eve special.

Top marks for the Christmassy border around the opening titles – a cheap way of creating a spot of festive cheer without having to go to the expense of shelling out for new titles.  Mrs Merton is in full holiday mode – handing out mince pies and greetings – prior to her first guests, Alma and Mike from the Street ….

It was an unexpected treat (I think that’s the right word) to witness Amanda Barrie and Johnny Briggs duetting on the evergreen Something Stupid.  You have to give them top marks for being game (the largely octogenarian audience lapped it up of course).

We’re still in the early days of the series, which meant three guests jostling for position in each half hour show.  Later, TMMS would drop down to just two guests – this was a wise move as it meant that there was the possibility a half-decent interview might develop.  Amanda and Johnny are amiable enough but they’re really never given any questions that they can actually answer (a pity, but not surprising, that they didn’t confess which of their co-stars they hated ….)

There’s slightly more substance when Mrs M meets Glenys Kinnock. It’s always fun to see a combative guest who isn’t content to simply take the blows, but instead elects to gently go on the offensive.  When Glenys started to deal with the questions by asking her own, you got the sense that Aherne was forced to do a bit of speedy adjustment. As entertaining as the show often was, this was its main weakness (especially to begin with). Aherne often appeared to be more interested in delivering her scripted barbs than dealing with the answers she might receive.

Up next is by far the oddest part of the show. Seven year-old orphan little Tommy Regan is subjected to a special treat – a song from Mrs Merton. As she begins to blub her way through The Little Boy That Santa Claus Forgot, some of the audience are clearly getting a little misty-eyed too.  The punchline to this spot of mawkish sentimentalism? There isn’t one, which I guess was the point.

Gary Rhodes closes proceedings with some entertaining back and forth banter and a spot of food, tested by some of Mrs Merton’s most trusted lieutenants. That leaves just enough time for Hooky and the boys to play us out with that Slade song.

An entertaining enough half-hour, but many of  the series’ most entertaining moments (the unforgettable Bernard Manning/Richard Wilson face-off, for example) were still in the future at this point. 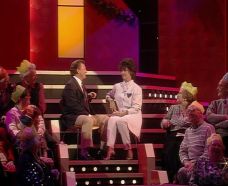 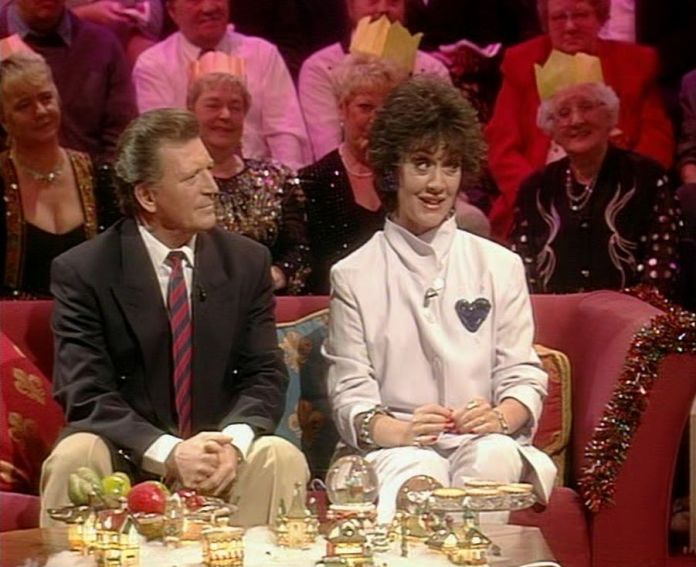