Skip to content
HomeDoctor Who – The Romans. Episode Four – Inferno 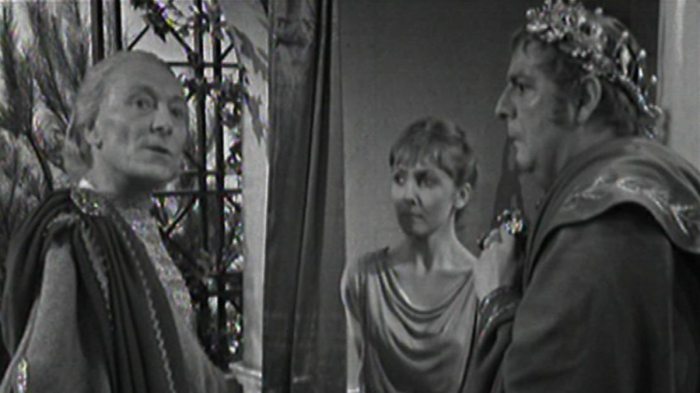 Inferno opens with another demonstration of Nero’s ruthlessness. Ian and Delos have escaped and Nero’s none too impressed with Barbara (Barbara couldn’t help but shout out to Ian, which infuriated Nero). “So you’re a friend of the gladiators are you?” He then asks a soldier for his sword and looks set to murder Barbara.

The scene is blocked well, as Nero stands in front of both Barbara and the solider when he strikes the killing thrust. We hear Barbara scream and it’s possible to wonder for a split second if he has actually done the unthinkable – but no, it’s the guard that’s died. “He didn’t fight hard enough” mutters Nero as he looks at the (presumably) blood-covered sword whilst Barbara looks suitably sick.

Although The Romans is generally regarded as a comic gem today (although some people will never accept that Doctor Who could or should be a comedy) there’s plenty of evidence that viewers back in 1965 were rather nonplussed. The audience research report includes a number of unfavourable responses, such as “this programme gets more and more bizarre; in fact it’s so ridiculous it’s a bore” and someone else declared that the series “was only fit for morons”. The report summed up that most of the respondents felt that “the story had steadily declined to a farcical and pathetic anticlimax”. Oh dear!

It’s difficult to see exactly what they found to be so irritating, as the script is still bubbling along nicely with some excellently played comic gems. Nero, tiring of the acclaim heaped on the Doctor, decides to throw him to the lions. But he doesn’t directly tell him, all he says is that he wants him to play in the arena. The Doctor knows what’s going on though and Hartnell and Francis share another classic two-handed scene. Francis’ hangdog expression is priceless!

DOCTOR: Yes, well I promise you I shall try to make it a roaring success.
NERO: You’ll have to play something special, you know.
DOCTOR: Oh, yes, of course, of course, yes. Something serious, yes. Something they can really get their teeth into, hmm?
NERO: You can’t know, you can’t. I’ve told no one.

The major weakness with the story is the revelation that Maximus Pettulian had come to Rome to murder Nero – since the real Pettulian was so feeble it’s rather a stretch to imagine he could ever be a successful assassin. The burning of Rome isn’t quite as successful as it could have been either – but on Doctor Who‘s budget this isn’t too much of a surprise. It’s worth reflecting that later prestige serials like I Claudius had similar production standards so if you place them side by side, The Romans stands up quite well.

But as we’ve seen, most of the viewers questioned in 1965 weren’t impressed and seemed to be bored of historical stories – much preferring the Doctor’s trips into the future. But they should have been careful what they wished for, as we now jump headlong into six episodes of The Web Planet …….

3 thoughts on “Doctor Who – The Romans. Episode Four – Inferno”