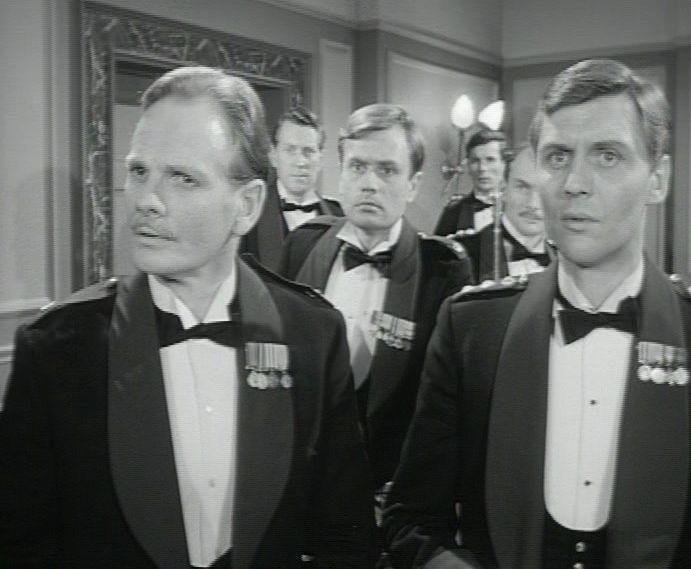 Sir Hector is a worried man.  The Regiment’s pride and joy – the Balaclava Silver – is being stolen piece by piece and replaced with good quality fakes.  Sir Hector wants the culprit caught, but the honour of the Regiment is uppermost in his mind.  So Gideon has to work unofficially to bring the culprit to book – and the burning question for him is whether one of the upstanding officers and gentleman could be responsible.

It’s possibly coincidental, but The Thin Red Line has something of the feel of Redcap (ABC, 1964-1966).  Like Gideon, Sergeant Mann (John Thaw) was an outsider who frequently had to battle against the superior nature of the officers under investigation.

Gideon’s lack of enthusiasm for this job is very plain.  He’s too polite to tell Sir Hector so (and his respect for authority means that he’s not going to be openly critical to his superior) but the thought of giving the Regiment preferential treatment is something that obviously rankles a little.

Sir Hector is presented as something of a man out of time – he believes in the honour of his officers, simply because they are officers and gentlemen.  But Gideon is not prepared to take anything on trust and tells them that they, like everybody else, will be investigated.  This leads to one of the most entertaining scenes in the episode, as the superior Major Donald Ross (Allan Cuthbertson) leads the others in pouring icily polite scorn on the Commander.  Although Gideon mentions to Ross that he commanded a Regiment during the war, that doesn’t impress the Major at all.  “Oh, in war lots of very strange people become officers.”  The arrogance of the professional soldier (who no doubt viewed the influx of new officers during WW2 with horror) is beautifully expressed here.

There’s not enough time to examine the characters of many of the officers in detail – so the focus is mainly on Ross.  Allan Cuthbertson was a very familiar face on British film and television screens between the 1950’s and the 1980’s.  Equally at home in drama or comedy (a memorable appearance in Fawlty Towers and a stint as Tommy Cooper’s straight man, for example) he gives his usual assured performance as the rather shifty Ross.

It’s quickly revealed that Ross owes a substantial sum of money to the well-heeled bookmaker ‘Bookie’ Barton Smith (Donald Pickering) and he has to face the humiliation of his wife’s public affair with a brother officer, Captain James Murray (Michael Meacham).  But the pain of being cuckolded quickly fades when he realises that he can threaten to divorce his wife, thereby destroying Murray’s career in the Regiment when he names him as the guilty party or he can force Murray to pay off his gambling debts.  Murray plumps for the latter, although the revelation that Ross is broke does tend to rule him out as a suspect.

To be honest, the culprit’s identity is probably not the most taxing mystery in the world.  Sir Hector’s grandson, Captain Robbie McGregor (John Cairney) dotes on the old man and has been selling off the silver in order to make Sir Hector’s last years a little more comfortable (Sir Hector gambled away his fortune and Scottish estates many years ago).

We’re invited to look kindly on Robbie’s motives, but although it’s true that he didn’t steal the silver for himself, it’s all still a little odd.  Robbie bemoans the fact that a brave old man like his grandfather is broke, but then nobody knew the truth about Sir Hector’s finances.  It seems inconceivable that the Regiment wouldn’t have looked after him, so Robbie’s theft could be less about his grandfather and more about making a statement.  He tells Gideon that he regards the Balaclava silver with loathing.  To him, the silver is a dead reminder of the Regiment’s past.  With it, the Regiment remains backward looking, always concentrating on their great victories from previous centuries.

The end of the episode is nicely underplayed, as Gideon leads Robbie away.  Although not explicitly stated, it seems obvious that Robbie will face the full force of the law – exactly what Sir Hector didn’t want to happen.  But although Gideon did seem to agree with Sir Hector that his investigation would be unofficial, this ending tells us that Gideon’s duty to the law overrides all other considerations.  In this way, we can compare Gideon’s sense of duty and honour to that of Sir Hector – just as the old man has his own set of values, so the Commander has his.

We never find out Sir Hector’s response to the revelation that his grandson was responsible for stealing the Balaclava Silver, but it’s not difficult to guess.  To the General, honour is everything – so this might very well be a blow from which he finds it impossible to recover.  It’s an uncomfortable thought that Robbie’s love for his grandfather will, in the end, be the cause of a great deal of pain.

This episode isn’t one that’s adapted from John Creasey’s novels, which may explain why the plotting feels slightly loose.  For example, late on, suspicion briefly falls on Sir Hector after Gideon discovers that he’s penniless.  This makes no sense at all – if Sir Hector was responsible, why would he have asked Scott-Marle and Gideon to investigate?  It’s also slightly hard to swallow that nobody (apart from Robbie) is aware of the perilous state of the old man’s finances.  By his own admission, at one time Sir Hector was a major landowner – so how was he able to sell off his land, properties and other possessions without anybody realising?

The Thin Red Line is one of the best-cast episodes of GW.  Finlay Currie, already in his mid eighties at the time, gives a nicely judged performance as the General.  Allan Cuthbertson is, as previously mentioned, first-rate and Donald Pickering oozes upper-class disdain in his trademark fashion.  Mary Yeomans only has a small role as Ross’ philandering wife, but she still manages to make quite an impression.  And if a Scottish Regiment of this era didn’t feature Gordon Jackson then I’d feel somewhat cheated.  As Sgt McKinnon he’s only in a couple of scenes, but his presence is a reassuring one.

If you want to read more about the episode, then I can recommend this wonderfully detailed post on a new blog called You Have Just Been Watching.