If you were looking to crown a British King of Quiz shows, then surely Bob Monkhouse would be your man. The Golden Shot and Family Fortunes were a couple of his big hitters, although he also had some very obscure shows on his cv.  Ironically, it seems that few people today remember Monkhouse’s Memory Masters whilst his first quiz effort (Do You Trust Your Wife?) has also fallen down a crack in time.

Bob’s Full House is one that’s endured though. And thanks to repeats on Challenge, a heathy selection are available to enjoy on YouTube.

“In Bingo lingo clickety-clicks, it’s time to take your pick of the six”

This was the perfect show for Bob. It allowed him to do a bit of stand-up at the start and then interact with the four contestants in a mildly teasing (but always friendly) way before the serious part of the quiz began.  Although there were a few rumblings that bingo was too down market for the BBC, BFH was actually a pure quiz rather than a televised bingo session (although surely that’s been done by someone somewhere).

Round one was Four Corners, where you had to … well, you can probably guess.  The first contestant to answer four questions correctly would also get a prize (there would be much cooing from the studio audience in that sort of semi-ironic Blankety Blank way).

The pace would pick up with Round two – the Monkhouse Mastercard. This time the contestants could select one of their numbers which matched with a variety of quiz topics.  A slightly more impressive prize would be given to the one who managed to light up their middle line.

By the time we get to round three – Full House – things are going full throttle. Now it’s just a straight race to the finishing line, with a series of rapid fire questions requiring good fingers on buzzers action.  Bob comes into his own here, rattling through question after question like the pro he was.

The winner would then join Bob for the Golden Card. A holiday destination (which always had to be around seven letters) was the prize and there were fifteen questions to be answered.  With a time-limit of just one minute things could get tense – the more wrong answers, the harder it would be to locate the letters (other squares on the board contained money, which was nice but no help when you were looking for an all-expenses paid holiday).

BFH was a hit straight away – by the end of the first series in December 1984, the show was pulling in more than thirteen million viewers. It’s early evening Saturday timeslot may be one of the reasons why it’s fondly remembered today – possibly it wasn’t the programme that we were all tuning in for, but it was a dependable part of the television furniture for a good number of years.

And maybe it plays a little better today than it did then. Bob was respected in the eighties, but he also had to fend off a fair number of brickbats. In the last few years of his life, and in the decades following his death, his critical standing has certainly increased.  Maybe at the time we just took him for granted – now, some thirty years on, it’s easier to see just how good he was. 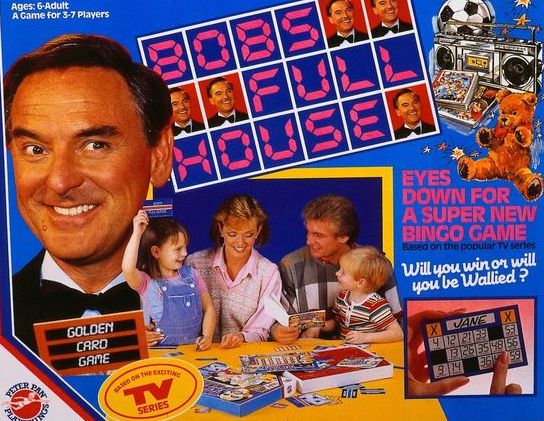