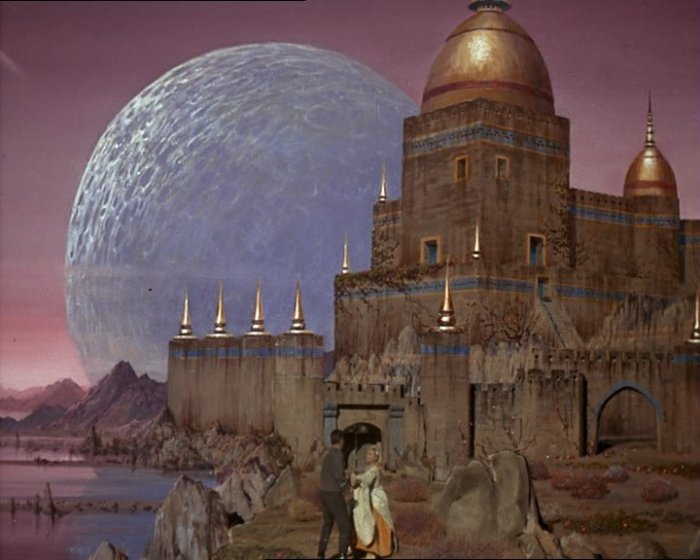 Part two opens with a handy recap – continuing to observe the events from decades past, Kirk and the others learn that Pike has become a prisoner on Talos IV, captured by a group of oppressive looking aliens who aren’t big on small talk. They clearly have impressive powers though, since they’re able to conjure up illusions which are even better than the real thing.

Pike, with his arms crossed, looks rather butch as he faces down the Talosians from the wrong side of a prison cell. But the way he reacts to his captivity with a futile display of anger is probably the wrong approach. Given how dispassionate the telepathic Talosians are, brute strength isn’t going to cut much ice with them.

There’s something pleasingly oppressive about this scene – the physically powerful (but temporarily neutered) Pike facing down the calm aliens, who regard him with the sort of mild curiosity usually reserved for laboratory animals. Which is exactly what he is.

Scenes aboard the old Enterprise give us an opportunity to observe all the characters who never made it into the second pilot. Majel Barrett is icily effective as Number One – a female second in command could have worked very well, although I’m not sure that Barrett would have been a strong enough actress to carry it off on a regular basis.

Pike gets the chance to flex his muscles when he battles a slightly silly-looking opponent. It’s all still an illusion of course (which might help to explain why everything looks like it was recorded on a fake-looking backlot!) There’s another lovely matte shot in this scene – which rightly popped up every so often on the end credits as a highlights still.

The winsome Vina (Susan Oliver) is still hanging around Pike, but he’s having none of it. She continues to tempt him in a series of guises though, the most memorable being a green-skinned Orion slave girl (due to its regular use on the end credits during series one it has to be one of Star Trek‘s most indellible images).

Susan Olivier is excellent as the vulnerable Vina. She certainly provides a sharp contrast to the more straight-jawed antics of Jeffrey Hunter.

If the first part of The Menagerie was mostly new material with elements of The Cage dropped in towards the end, then part two is mainly comprised of the pilot footage. We do pop back to the trial room on a regular basis, but most of these short scenes do little to advance the plot (they seem to be included purely to give Kirk something to do).

And then The Menagerie rather stutters to a conclusion. The audience has been told several times that Talos IV is strictly off limits  (by setting course there Spock has invited the death penalty). This is later waved away in a rather casual manner (very disappointing). Also slightly staggering is the reveal that Mendez is nothing but an illusion created by the Talosians.

So the whole trial was a fake …

It’s obvious that Spock wasn’t going to be put to death, but this move does negate a great deal of the drama from the last few hours. It’s all slightly baffling  but let’s be generous and assume that Roddenberry was working against the clock.

The wheelchair bound Pike (one beep for yes, two beeps for no) is another of those enduring Star Trek images. Although the story’s message (the chronically disabled can’t possibly enjoy any sort of fulfilling life) hasn’t aged well.

Dropping Pike off on Talos IV, to be reunited with the aliens who tortured him (in order that he can live in peace there in an imaginary paradise) seems a strange sort of resolution. But it was never going to be easy to wrap a logical covering story around the pilot footage.

The Cage is best sampled on its own terms, but back in the sixties and seventies that wasn’t possible, so The Menagerie was the next best option. It’s a little bit bloated (and as discussed, the logic of the linking scenes rather disintegrates in this concluding episode) but for all its faults it’s still a memorable story.