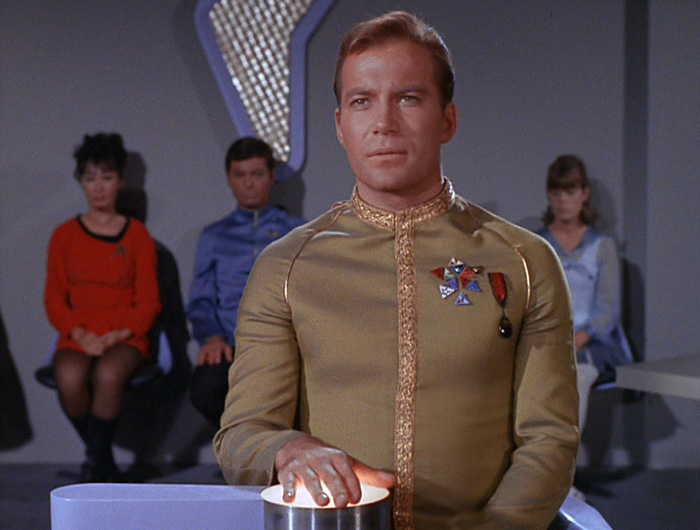 Mankiewicz’s original premise – a cheap story confined to a single set – was opened up by Carabatsos but it’s debatable whether this actually strengthened the story or not. Although I do have a fondness for the concluding act – silly though it is ….

During an Ion storm, Kirk is forced to jettison a research pod containing Lieutenant Commander Benjamin Finney (Richard Webb).  Kirk maintains that the Enterprise was on red alert at the time, but the computer reports that the ship was only at yellow alert.  Kirk’s apparent perjury is enough to trigger a court martial.

An obvious weakness with this episode is the fact that we know everything’s going to work out in the end for Kirk, despite the evidence appearing to be completely damning.

But there are some good moments – such as the way Kirk’s old Academy pals give him the cold shoulder or the moment when Kirk angrily reacts to Commodore Stone’s attempt to sweep the matter under the carpet by asking him to resign.

As the court martial wears on, a battle plays out between Kirk and the computer. We’re told that “computers don’t lie” so it seems that Kirk must be the one who’s lying.  The conflict between man and machine crops up time and again in science fiction (just think how often Jon Pertwee’s Doctor berated the limitations of the machine mind).

This is a decent part of the episode (even the logical Spock is forced to admit that computers aren’t infallible). Indeed, the original drafts pushed this concept even further – originally the computer was shown to be sentient and had taken a strong dislike to Kirk, deciding all by itself to falsify the evidence.

Less successful is the allegation that Kirk jettisoned the pod out of a sense of malice. Evidence is brought to show that Finney’s career was seriously downgraded by Kirk, but we never believe for a moment that Jim would have acted at all incorrectly.  Indeed, Spock steps up to tell the jury that “it is impossible for Captain Kirk to act out of panic or malice. It is not his nature”.

By now you’ve probably realised the truth – an embittered Finney is alive and (sort of) well.  Having faked his own death and corrupted the computer, purely to bring shame and disgrace on Kirk, he’s now hiding in the bowels of the Enterprise.  Umm, okay.  Clearly Finney is far from the full shilling at the moment. Kirk ventures down to Engineering alone in order to face him.  Why? Because it makes for good drama I guess.

But although the logic of the story has thoroughly unravelled by this point, we can still enjoy the Kirk/Finney face-off.  The taunting Finney (“your own death would mean too little to you. But your ship .. it’s dead .. I’ve killed it”) is excellent value.  Finney – by attempting to target the Enterprise – has clearly chosen Kirk’s weak spot (and his one true love).

The inevitable fight then occurs. Whilst the pair are facing off, I like to simultaneously goggle at the obvious stunt doubles used whilst also marvelling at how easily Kirk’s shirt gets ripped. This always happened to him ….

Elisha Cook Jr. adds a touch of class to proceedings as Samuel T. Cogley,  Kirk’s defence attorney.  Although the way he abruptly vanishes before the end of the story is an illustration of messy editing fracturing the narrative flow.  As is a late voice-over from Kirk which attempts to paper over some of the other story cracks.

At one point Finney’s daughter looks to possess a vital piece of the puzzle (after talking to her, Cogley appears to have found a new line of defence) but it’s never made clear in the transmitted episode what this might be. A scene with her and Cogley returning to the Enterprise was filmed, but then cut. This is a pity (although it’s present in James Blish’s novelization).

Joan Marshall as Lt. Areel Shaw is rather watchable. An old flame of Kirk’s, she just happens to have been assigned to the court martial as its prosecutor. Starfleet (which is actually named for the first time in this episode) is clearly a small world ….

Court Martial is enjoyable enough (everybody looks very nice in their dress uniforms) but isn’t quite the finished article.  No matter, normal service will be resumed shortly. 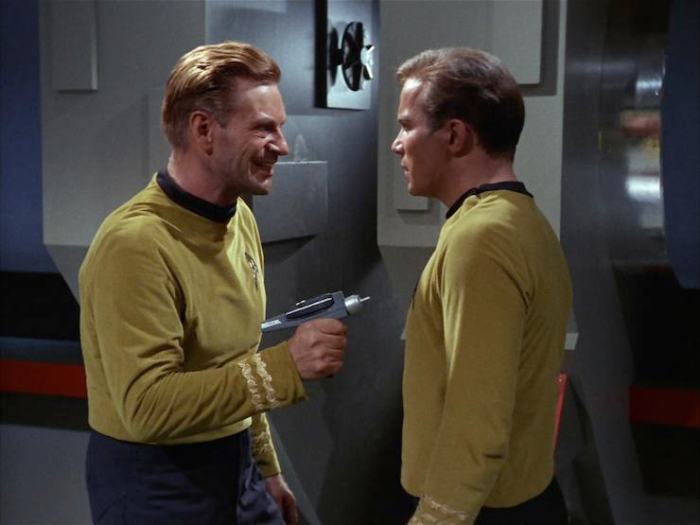