Skip to content
HomeStar Trek – The Return of the Archons

The Return of the Archons mixes together several story ideas which even this early on feel like Star Trek archetypes (computers with ideas above their station and an alien civilisation modellIng their architecture and fashion sense on the Earth).

The show has already established that the galaxy is a vast, lonely place.  That the USS Archon (which provides us with the reason why the Enterprise has journeyed to Beta III) was reported missing nearly 100 years ago bears this out.

It seems that if you get into a scrape out here then it’s best to use your own ingenuity as no-one is going to come riding to your rescue. Maybe that’s one of the reasons why Kirk feels justified in taking the law into his own hands.

Unlike Miri, which mentioned how strange it was that an alien society had aped the fashions of Earth, Archons quite wisely ignores this.  The real-world reason (it’s cheaper to use an existing backlot and costumes off the peg than it would have been to construct an alien town and create space-age fashions) is obvious, but it’s not really a problem.

In Tomorrow is Yesterday, Kirk was happy to beam down to present day Earth in his Starfleet uniform. But here the landing party makes much more of an effort (donning  appropriate period clothes).  A small touch, but it’s an indictor that this episode has a more serious tone.

The festival – a strict period of time where the usually docile inhabitants of Beta III are allowed to rape and murder at will – is a bizarre concept.  It certainly helps to give the episode a little extra spice.

There’s plenty to chew over in the script, although much is open to interpretation.  Is the mysterious and all-powerful Landru supposed to be a critique of organised religion?  The monk-like robes worn by Landru’s chosen ones, the Lawgivers, would suggest so.

But it’s also possible to read Landru as a piece of anti-communist propaganda. “Your individuality will merge into the unity of the good, and in your submergence into the common being of the body, you will find contentment and fulfilment. You will experience the absolute good”.

Nineteen Eighty Four looks to have been an inspiration as well (for the festival, see the two-minute hate – a somewhat more condensed, but similar, idea).

The way that McCoy and Sulu are brainwashed into total obedience is very jarring, especially Bones – who has always been the epitome of good-humoured common sense. Sulu – who gets the Landru treatment in the pre-credits teaser – is gifted a brief scene in which he’s required to do a spot of acting. It seems to have been quite a while since Sulu has done anything interesting.

Archons is the first episode to mention the Prime Directive, but Jim is quick to find a loophole. When Spock reminds him that the Prime Directive forbids interference in other civilisations, Kirk snaps back that the rule “refers to a living, growing culture. Do you think this one is?”.  That’s something of a fine distinction.

Kirk feels entirely justified in destroying Landru, since it means that democracy will be brought to a society which has been suffering under an autocratic ruler. But we’ve seen throughout history the problems caused when civilisations are tampered with. Sometimes with the best of intentions, sometimes not.

Star Trek would make several coded references to the Vietnam war throughout its three year television mission.  The series tended to be rather fluid (depending on the sensibilities of the specific scriptwriter) about whether American involvement there was a good or bad thing.  Archons is one where you feel that they’re firmly in the pro camp.

Kirk doesn’t waste any time asking the inhabitants of Beta III whether they’d like to remain under the rule of Landru.  He’s decided their future for them and that’s that ….

Harry Townes gives a nice performance as Reger, one of the few not to follow the will of Landru. It feels rather contrived that Kirk and the others are directed to him with such alacrity – but the story needed someone like Reger to quickly fill the viewers in about how Beta III functioned.

Return of the Archons doesn’t exactly have a watertight plot (just what is the point of the festival?) but everything is played with conviction and that helps to keep things ticking over nicely. 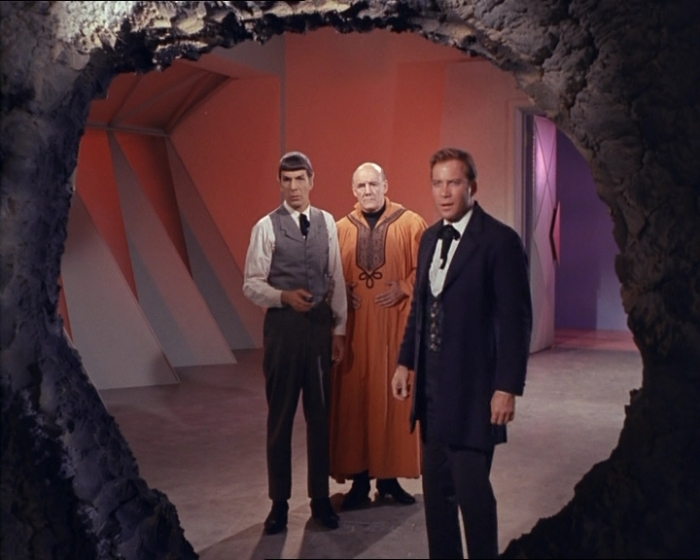 One thought on “Star Trek – The Return of the Archons”