The Enterprise encounters an apparently derelict late twentieth century spaceship, the SS Botany Bay. On closer inspection it’s found to contain several hundred human beings who have been held in a state of suspended animation for over two hundred years.

Their leader, Khan Noonien Singh (Ricardo Montalban), is revived. Strangely charismatic to some, his dreams of conquest are as strong now as they were back in the 1990’s ….

Space Seed is held to be something of a classic, although it’s always been one that I’ve never really engaged with. Ricardo Montalban lights up the screen whenever he’s on, but Khan’s relationship with the hapless historian  Lt. Marla McGivers (Madlyn Rhue) has always irritated me.

It’s nice to have a meaty guest role for a female, but a shame that McGivers is such a limp and easily manipulated character. That she’s held in mild contempt by Kirk is made clear right at the start, when he struggles to get her name correct (his tone also implies that as a historian she doesn’t fulfil any useful function aboard the Enterprise).

This seems harsh, but when they beam over to the Botany Bay you have to concede that he may have a point. The moment McGivers claps eyes on Khan she goes more than a little weak at the knees. That she suddenly falls head over heels in love with him does stretch credibility a little (although it’s later explained that she has a thing for dominant men from history).

As you’d expect, there’s oodles of soft focus shots of Rhue as Khan effortlessly seduces McGivers. He pulls out the old “your hair would look better down” line which never gets old ….

If Khan had used some form of mind control on her, rather than simply his own ripling testosterone, possibly I wouldn’t have such an issue with the story. Especially since we then have to accept that McGivers is quite happy to betray her colleagues and help Khan take control of the Enterprise.

The moral of the story seems to be that women (even ones from the future) are easily dominated and require a forceful man to keep them in line. Hnm. It’s consistent with some of the previous first season stories, but no less easy to stomach.

Elsewhere, there’s some nice background to the Eugenics wars of the 1990’s (a far off period of time back in the sixties). Mind you, given that Khan ruled a large part of the world for a number of years, it’s slightly strange that nobody recognised him to begin with, not even the historian McGivers.

Remaining in nit-pick mode, the instrumentation of the Botany Bay doesn’t look any less advanced than that of the Enterprise (given the age of the vessel this is remarkable). And given how long it took Khan to wake up, it’s amazing that he’s able to nip over to the Botany Bay and seemingly revive all his crew in a matter of minutes.

Highlights of the episode include McCoy’s face off with Khan. Khan, having just woken up, puts one hand around Bones’ throat and holds a knife there with the other. “Well either choke me or cut my throat. Make up your mind”. I love Bones.

The latter part of the episode ramps up the action as Khan takes over the Enterprise. This he does with embarrassing ease, but since he’s already been described as a superman I suppose this sort of thing comes naturally to him.

The climatic fight between Kirk and Khan is a good one, provided you can ignore the rather obvious doubles. And McGivers does eventually come good, which gives Kirk the excuse to bundle her off with Khan to the inhospitable planet Citi Alpha 5 (we’d have to wait until 1982 to find out how things worked out for them).

A story of two halves then, with the second much more engaging than the first. 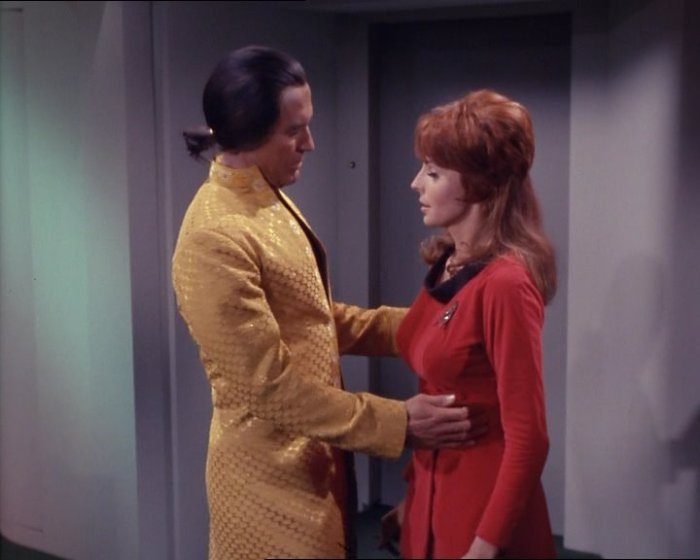