Skip to content
HomeDoctor Who – The Time Meddler. Part Two – The Meddling Monk 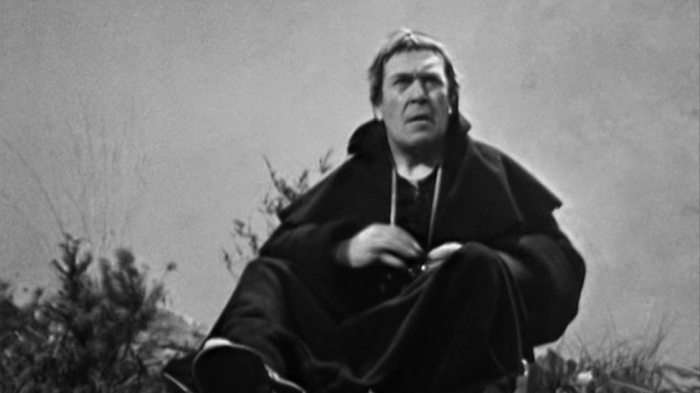 During The Watcher, the monk was presented as something of a sinister figure, but the first minutes of The Meddling Monk portrays the character in quite a different light. We see him pottering about the monastery preparing breakfast (with the unspoken question ligering about how there could be a toaster and other modern appliances in England, 1066). He then toddles along to the Doctor’s cell and cheerily bids him good morning.

Although he’s obviously crowing that the Doctor’s still his prisoner, since he’s gone to the trouble of preparing him a hearty breakfast he can’t be all that bad. Such a pity that his efforts are wasted as the Doctor flings the food back into his face! Pre-recorded lines of dialogue from Hartnell help to create the illusion that the Doctor’s in the cell (whereas we won’t actually see him in person again until the following episode).

Butterworth’s a joy throughout this episode and indeed the rest of the story as well. Little bits of business – such as attempting to take some snuff on the windy mountaintop – might have been the sort of thing worked out in rehearsal, but it helps to fill what would otherwise be a quiet moment.

Butterworth interacts appealingly with the villagers as well as Vicki and Steven but he really shines when the monk and the Doctor clash later in the story . Hartnell and Butterworth spark off each other so well that it’s no surprise that the monk was brought back for a further appearance in season three.

Steven continues to act in a fairly aggressive manner. After they’re apprehended by the villagers he’s quick to react angrily, but the headman of the village, Wulnoth (Martin Miller), believes they’re are innocent travellers and is content to see them on their way.

He provides them with food and drink for their journey, which Steven – first grudgingly and then with more feeling – thanks him for. In parting, Wulnoth and Edith offer their ritual farewell – “god be with you”. Politeness dictates that both Vicki and Steven respond in kind. Vicki does so straightaway, but it’s another nice character beat that Steven hesitates for a few seconds before he gives the response as well.

A small raiding party of Vikings adds an element of danger to the story. They’re a rum looking lot though (beards and eye-patches ahoy). The leader orders his men to remain undetected, as their mission is to gather intelligence for a forthcoming substantial attack. However they don’t really achieve this …..

Two of them attack Edith and although it’s not explicitly stated, it’s plain that she’s been raped. That Vikings enjoyed a bit of rape and plunder is a historical fact, but it’s still a slight surprise to see it in this story (even if it’s done in an understated way).

Eldred (Peter Russell), a beardy, wide-eyed member of the village is convinced that Steven was responsible, but this potential plotline was never developed as Edith quickly confirms that it was the Vikings. Had this been a six-parter, then maybe we might have seen the angry villagers pursuing Steven and Vicki, but this potential plotline is nothing more than a throwaway moment here.

Indeed, the story continues to move at quite a pace – only a few moments after Wulnoth, Eldred and the others set off to look for the Vikings, they find them (and a brief battle ensues). With Eldred injured, Wulnoth takes him to the monastery, where the monk is forced to take him in. Vicki and Steven are also there and find the Doctor’s cell, but the Doctor’s no longer there …..

One thought on “Doctor Who – The Time Meddler. Part Two – The Meddling Monk”