Skip to content
HomeDoctor Who – The Time Meddler. Part Three – A Battle of Wits 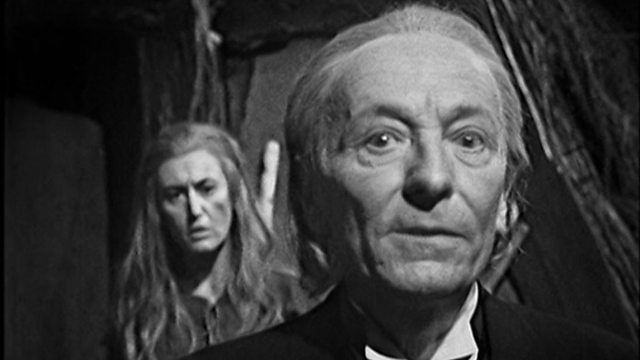 At the start of this episode it’s clear that Vicki still has the upper hand over Steven.  She’s the one who deduces that the Doctor must have escaped from his cell via a secret passage (and she also manages to find it).

But the roles are reversed later after they return to the beach.  Vicki is appalled to find that the tide’s come in, as it surely must mean that the TARDIS has been washed out to sea.  Steven tries to comfort her by telling her that maybe the Doctor has moved it, but that only upsets her even more.  If the Doctor’s demateralised the TARDIS then he’d have no way of returning and they’ll be stranded in eleventh century Britain forever.

Although Vicki has developed a pleasingly independant streak over the last few stories, her sudden despair and defeatism does suggest that she’s not too far removed from the naive young girl we met in The Rescue.  It seems hard to credit that she’d really believe the Doctor would just leave them – but possibly this doubt can be put down to the lingering trauma of her life on Dido.

The Doctor’s still very much about though and he pays another visit to Edith.  As he takes his leave of her, there’s a nice shot as the camera moves from behind the actors and refocuses with Hartnell framed in a close-up and a puzzled looking Edith placed in the background.

Apart from Douglas Camfield’s undoubted skill with a film camera, he was also someone who pushed hard to achieve interesting picture compositions in the studio.  Due to the hectic nature of Doctor Who‘s production it wasn’t always possible, but scattered throughout his stories are numerous examples (the grouping of the Doctor, Jamie and Victoria at the start of The Web of Fear is a good one).

Given how unwieldy the cameras were in 1965 it obviously wasn’t an easy task to move it so quickly (you can detect a little wobble as it repositions) but I’m glad Camfield made the effort as it just adds a little something to the conclusion of the scene.

The nature of the Doctor’s relationship with the Monk is still a mystery (which is only answered, indirectly, at the end of the episode).  That the Monk knows his name when they meet again might suggest that they already know each other, but this could also be explained away by a conversation earlier in the story which we didn’t see.

It’s interesting that the Doctor gains the upper hand by using the old trick of pointing a stick into the Monk’s back and pretending that it’s a rifle.  If they were old acquaintances then you’d have assumed that the Monk would know that the Doctor wouldn’t pull the trigger.  Unless, of course, the young Doctor was a bloodthirsty sort who’s only recently mended his ways!

The Monk’s plan is becoming clearer though.  He wants to destroy the incoming Viking fleet and has a helpful checklist to aid his memory, which I love.  It starts with his landing in Northumberland and ends with him meeting King Harold (no doubt to receive the King’s grateful thanks).  Clearly the Monk was a little starstruck.

Two less than fearsome Vikings – Sven (David Anderson) & Ulf (Norman Hartley) are still lurking about.  They decide to hide in the monastery, which is a bad idea as the Doctor and the Monk are able, independently, to deal with them.  Both are attended to in the same way – the Doctor and the Monk bash them over their heads with what appears to be very thin strips of balsa wood.  Is this just a coincidence or is the script attempting to show that the two time-travelers are very much the same deep down?

Various clues – a wristwatch in the forest, the record player – have strongly suggested that the Monk isn’t of this time, but we have to wait until the end of the episode before Vicki and Steven make a stunning discovery – the Monk has a TARDIS.  This is something of a game-changer for the series as it’s the first step on the road to introducing the Time Lords.