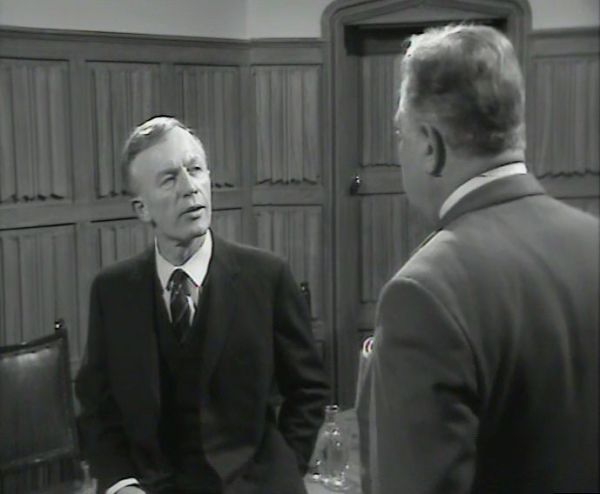 The ninth episode of series one, Reliable Sources is something of a milestone episode as we bid farewell to Det. Supt. Eden. There’s been a serial element running through a number of these episodes, which continues here (and in the episode to follow). Eden – after an intense grilling from the security commission – is told that he’s been cleared of any wrongdoing in respect of his handling of the Troika debacle (as have his fellow Special Branch officers). But any jubilation proves to be short-lived ….

If Reliable Sources shows us anything, then it’s how the bluff, honest Eden is no match for the devious Moxon. Right from the start, when Moxon warns Eden not to poke around in matters which don’t concern him, it’s plain that Eden will come off second best.

A Russian spy called Alexandrov (heavily involved in the Troika affair) has defected to the West. This means little to Eden, who still has a warrant for his arrest and is keen to enforce it, but Moxon firmly warns him off. When the news of Alexandrov’s defection is leaked to the papers, Eden becomes a prime suspect – especially since he’s recently lunched with Clive Bradbury (Tony Britton), an experienced Fleet Street hack who specialises in security stories.

What’s interesting is that Moxon admits to bugging Bradbury’s phone, so the true culprit of the leak would already have been known to him (although he later shrugs this off). Why then did he make Eden feel so uncomfortable? Possibly Moxon, the arch manipulator, simply can’t help himself.

The twist in the tail – the man responsible for leaking the story meets with Moxon – shouldn’t really come as a surprise. But both Eden and Jordan jump to the wrong conclusion (Moxon is corrupt) rather than the right one (Moxon is laying a false trail to confuse the Russians).

Morris Perry is on top form today and it’s nice to see both Tony Britton and David Collings guest-starring. Collings plays Bradbury’s editor, who’s just as keen as he is for a scoop on the Alexandrov affair. Although the story that’s leaked to them via Moxon’s proxy (Alexandrov’s precise whereabouts) doesn’t sound that exciting.

The fact that Eden’s been totally outplayed from beginning to end is highlighted by the way he’s unceremoniously shunted out of Special Branch and into an important-sounding (but no doubt meaningless) job for the next twelve months until his retirement is due. It’s easy to imagine Moxon’s hand in this, although given how easy Eden has been to manipulate, maybe not – after all, the next man in the hot seat might pose more of a challenge.

There’s been whispers throughout the episode that Jordan is in line for the job. He certainly seemed to think so, as when the Deputy Commander breaks the news that Det. Supt. Inman will be taking over, Jordan’s face visibly falls.

The next episode is clearly a key one as George Markstein returns to write it. Plus there’s the fact that the series moves into colour, which – together with the arrival of Fulton Mackay as Inman – helps to give these later S1 episodes the feel of a new series launch.