Edward Kirk (David Langton), an ex-colonial policeman, has been invited to return to Kenya in order to give evidence at the trial of a notable Mau Mau terrorist. Despite the best efforts of both Jordan and Inman he flatly refuses, but Moxon isn’t prepared to let the matter rest there ….

Alun Falconer’s sole script for the series, Depart in Peace is something of a slow burn. We eventually learn the reason for Kirk’s reluctance to leave the country, but the episode is in no rush to get there.

Before that point, there’s several entertaining confrontational scenes between Moxon and Inman to enjoy. The friendly relationship between Kirk and Inman is something that Moxon attempts to use to his advantage – indeed, this is an episode where he’s at his most silkily manipulative.

When even Inman can’t make any headway with Kirk, Moxon speaks to a journalist called Sullivan (Brian Marshall). Whilst not mentioning Kirk by name, Moxon drops enough hints to link him to a massacre in a Kenyan village – old history maybe, but possibly it’s the sort of lever that will galvanise the inactive Kirk.

David Langton plays to type as the patrician Kirk (Pauline Letts compliments him as Mary, Kirk’s wife). It seems that their idyllic life – running an antique shop in Surrey – is due to be disrupted by ghosts from their Kenyan past, but the truth is a little more complex.

Their current surface happiness is something of a sham, as it’s finally revealed that Mary is suffering from leukemia and may only have months to live (hence the reason why Kirk doesn’t want to leave the country). What’s remarkable is that she’s totally unaware there’s anything wrong with her. No doubt Kirk thinks he’s doing the right thing by keeping her in the dark, but it’s hard to sympathise with this point of view.

Although Jordan takes something of a back seat today, he does have a few memorable scenes. My favourite is when he partakes of lunch and drinks at Moxon’s club (Moxon asks him if he has a club, Jordan replies “only ones with bunnies”). Inman doesn’t take the news that his DCI has been chumming it up with Moxon very well, although eventually he calms down.

By the end of the episode everything’s been neatly wrapped up – Kirk agrees to go to Kenya and Moxon tries to plant another story with Sullivan (singing Kirk’s praises).  All in all it’s rather a low-stakes sort of story, but the guest playing of Langton and Letts certainly gives the script a lift. 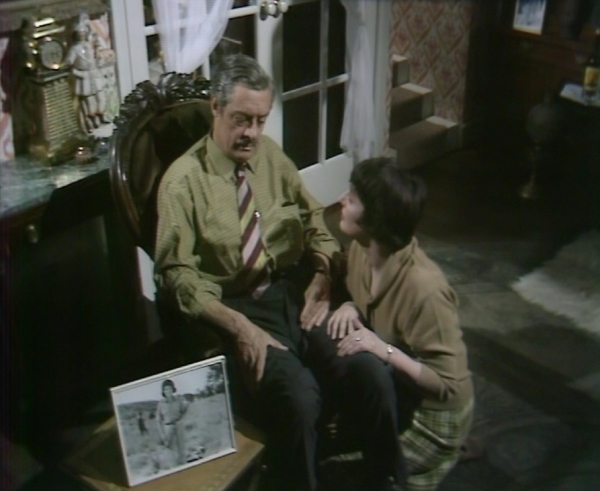