First stop is The Peacemaker, an episode from the third and final series of Survivors. Written by Roger Parkes it was the first of three scripts he contributed to series three (having already penned two episodes the year before). Parkes had an interestingly varied career – beginning with ITC series like The Prisoner and Man in a Suitcase before plying his trade during the seventies with the likes of Doomwatch, Crown Court, The Onedin Line, Blakes 7 and Z Cars (amongst others).

The M*A*S*H boxset has been sitting on my shelf for a number of years, so I might as well dust it down in order to enjoy a repeat of Check-Up.

Over on ITV there’s a repeat of Bless This House. The Frozen Limit is the episode in question (in which Sid and Jean buy a fridge freezer with the inevitable hilarious consequences).

For more light relief there’s Coronation Street. In today’s episode Alf, Fred, Renee and Mavis go fishing and have a day to remember. Renee ends up in the river (the stuntperson performing an athletic forward roll) and Mavis gamely jumps in to save her. 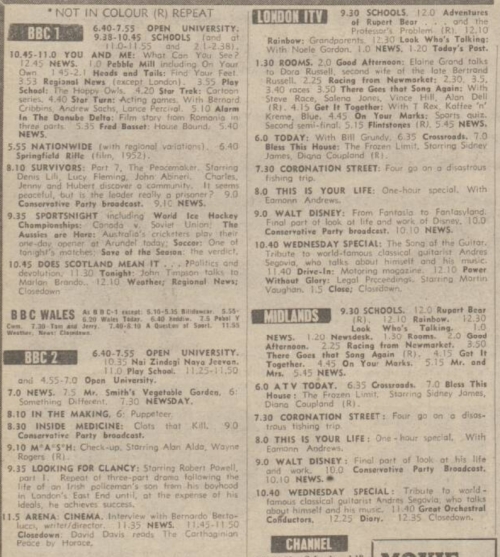