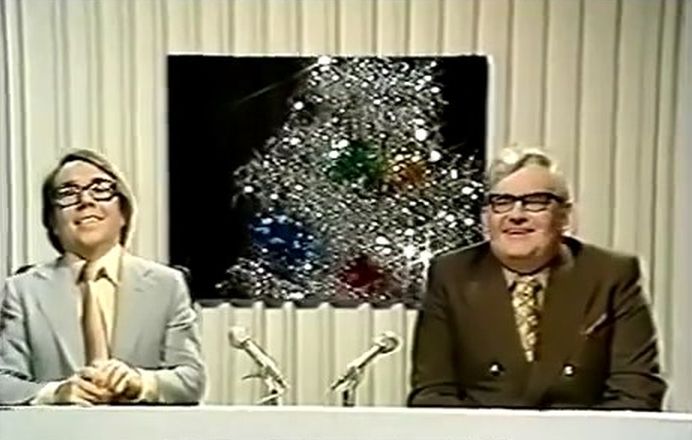 This was the final regular edition of CNWTS, with the Two Ronnies on hand on introduce Cilla Black, the Young Generation, Lulu, Mike Yarwood & Adrienne Posta, The Liver Birds, The Goodies and Dad’s Army.

Unlike David Nixon and Jack Warner, the Ronnies took a much more active role in proceedings, which means that it feels somewhat like an extended Two Ronnies show (most notably at the start, which opens in the time honoured way – news items, followed by a Two Rons party sketch).  This explains why the cut-down DVD version (excising all the other participants apart from Lulu and Cilla Black) still works pretty well as a Two Ronnies show in its own right.

The Young Generation back Lulu, as well as enjoying their own spot.  There’s rather a lot of them, aren’t there?  After Lulu and the Young Generation have leapt about for a few minutes, the Goodies arrive – via a film sequence which promises a grubby urchin the Christmas of his life (thanks to the Goodies Travelling Instant Five Minute Christmas).  Dialogue-free, it’s packed with typical Goodies sight gags as well as a healthy dose of comic violence (would they be able to get away with hitting a boy over the head with an outsized mallet today? Probably not).

Up next is The Liver Birds, which sees Beryl (Polly James) and Sandra (Nerys Hughes) reflecting on various aspects of Christmas – overindulgence and family relationships being top of the agenda.  The kind-hearted Sandra regards the remains of the turkey with sadness, whilst Beryl – always more pragmatic – has a different point of view. “Well, it’s his destiny isn’t it? I mean we’ve all got to die sometimes, it’s just that some of us go in black cars surrounded by flowers and some of us go in roasting tins surrounded by spuds.”

The Two Ronnies return for a some chat about their respective Christmases, which is notable for the number of times that Ronnie B stumbles over his lines. It’s a little odd that they didn’t do a retake, so either time was tight or it was decided that on Christmas Day the audience would be in a mellow mood and therefore more forgiving.

I’ve written elsewhere, about Mike Yarwood’s later career when his star was somewhat waning.  Here, a decade earlier, he’s pretty much at the top of his game – although this is a sequence that’s very much of its time (and if I’m being honest, a few of the impressions are a little weak).  The setting is a party at Number 10, so you won’t be surprised to hear that Harold Wilson and Edward Heath are in attendance (as is Frankie Howerd, for some strange reason).  Adrienne Posta provides support, but the topical nature of the piece makes it less effective than the more universal nature of the rest of the programme.

As a child, I tended to find Ronnie C’s chair monologues rather dull.  Now they’re often the highlight of their shows (funny how times and tastes change) so I’m glad one was included here.  Ronnie C also joins Cilla Black for a little crosstalk and a song, although how much you get from this part of the show will probably depend on how high your tolerance to Cilla Black is.

For me, we’re on firmer ground with Dad’s Army.  The platoon are incredibly proud to have been selected by the BBC to broadcast live to the nation on Christmas Day, but things aren’t as straightforward as Mainwaring would have hoped.  The rehearsals are slightly chaotic – thanks to the script provided by the BBC.  They’d assumed that the sergeant would be a cockney and the officer a gentleman, so Wilson is somewhat bemused that his part is full of slang whilst Mainwaring is incensed to be told that he doesn’t sound like an officer!  When the BBC man suggests that maybe they swop roles, the expressions on the faces of both Le Mesurier and Lowe are a joy!  With the rest of the platoon pitching in, notably to produce sound effects (Pike is in his element when asked to provide bird sounds) this is a nicely-written sequence with a decent pay off.

Following another quick Two Ronnies sketch, Cilla Black is back (along with a children’s choir – always a good bet at Christmas) to round things off before the Two Rons say goodbye with a selection of news item.

“And now it’s a Merry Christmas from me. And it’s a Happy New Year from him. Goodnight.” 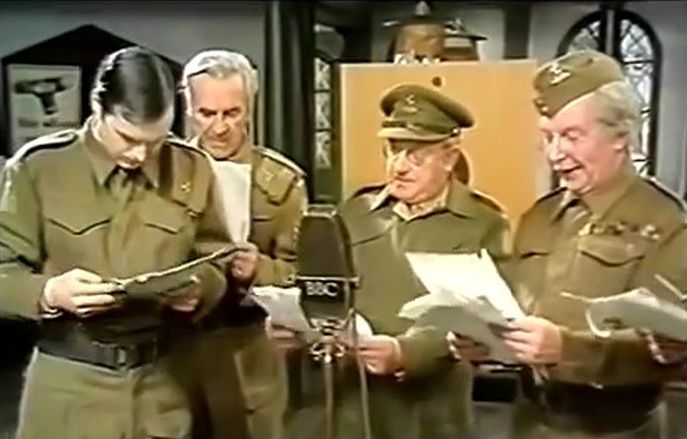