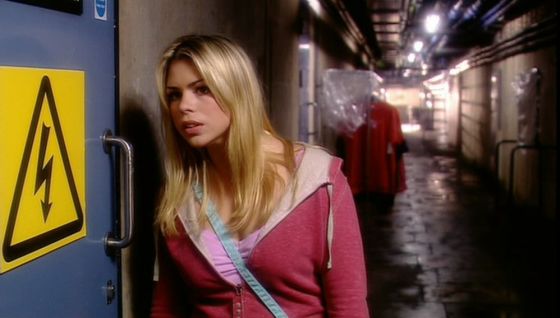 It’s somewhat astonishing to think that ten years have elapsed since Rose was transmitted.  But then, as somebody once said, time is relative.  In many ways, it’s difficult to rewatch any Doctor Who story and not be aware of the place it holds in the history of the series (i.e. what came before it, what was to come later).

But for those new viewers tuning in on the 26th of March 2005, Russell T. Davies had written Rose in such a way that it was possible to have a clear grasp of the fundamental aims of the show without having seen any previous episodes.  He’d clearly learnt the lessons from the TVM nine years earlier (which was an uncomfortable continuity-fest in many ways).

For us old hands, there were plenty of nods to the series’ past (Autons breaking through shop windows!) but never at the cost of alienting the new audience.  Rose was therefore a clean slate – with no previous baggage.  Of course, over the next ten years, Doctor Who would start to load all of the baggage back on (as soon as the show was an established success.)

Whether this is a good or bad thing depends on your point of view.  There’s no denying, for example, that many people’s inner-fan was warmed by the return of Rassilon (and played by Timothy Dalton, no less) but too many returning elements from the series past will tend to stifle originality and creativity.  It’s often said that 1980’s Doctor Who was continuity-obsessed, but NuWho has been equally (if not more) guilty of the same crime.  But since NuWho is a ratings and critical success, it seems to be tolerated.

All this was in the future when Rose first aired.  Nobody knew how successful the series would be.  Many were convinced that the 2005 series would be the first and last of the revived show.  After all, Doctor Who (whilst it’s always maintained a small but vocal fandom) had been a critical punching-bag for the majority of time it had been on the air.  There had been good reviews from time to time (especially during the early Tom Baker years) but generally the show had acquired the air of a faded, shabby institution – tolerated at best, rather than loved by the BBC.  In its later years it still attracted love and affection from the fans – but more for what it had been, rather than what it was at the time.

The ratings success of Rose (9.9 million viewers) came as a surprise to many.  Of course, this was written off by some critics as simple curiosity – in the weeks to come, they said, the ratings would slide inexorably downwards.  But though there was the odd dip, usually during the weeks when the weather was at its best, the ratings held firm and the show was an undeniable hit.

Revisiting Rose after a number of years, it’s possible to see that it has many of the strengths (and the weaknesses) of NuWho in general.  It has a decent story (if a little vague in places) and it moves at a fast pace.  But this is part of the problem – as 45 minute stories will never allow for the same character development which the original series enjoyed.  Outside of the regulars, only Clive (Mark Benton) has any decent screen time – and his function is essentially to tell Rose (and the audience) exactly who the Doctor is.  NuWho would employ many fine guest actors, but the reduced running times of the stories tended to ensure that many were rather wasted.

Let’s rewind back to the start of the episode.  It hits the ground running and by the time we’re 120 seconds in, we have a good idea about Rose’s life.  She works in London (the big red buses are a giveaway!), lives with her mum, has a boyfriend and has a job in a department store.  Once these visual clues have been laid before us, the story proper can begin.

Rose is menaced by a collection of shop window dummies in the store’s basement and is rescued by a mysterious stranger.  He tells her that the dummies are living plastic and he intends to destroy their relay device on the roof.  Oh, and he introduces himself as the Doctor.

The Doctor does destroy the relay device (and most of the building as well).  It’s certainly a dramatic opening – although it begs the question as to whether the Doctor miscalculated the strength of the bomb or whether he simply didn’t care about the possible loss of life that might follow.

Christopher Eccleston was seen as a considerable casting coup, although the announcement (four days after the transmission of this episode) that he wouldn’t be returning for a second series did rather put a dampener on things.  He’s fine in this episode – not outstanding, just fine.  He never seemed totally at ease in the role – although this may be an inevitable consequence of knowing that his time in the role was already ticking away.

He does have some good moments though – the flat scene with Rose (where he’s in the background – examining his ears, fooling around with playing cards, etc) is nicely done as is the following scene which is clearly an important one, as it shows Rose beginning to understand who the Doctor is.  It starts with a long scene shot with no cuts (this lasts 1:20, which in modern television terms is an absolute age without a cut).

By this time, the idea that the Doctor has some connection to a small blue box has been made – although there’s still no assumption that the audience will know what it is or what it does.  That comes later, when it’s fully explained.

So now we’re 15 minutes in and the basics of the series have been established.  Mysterious plastic mannequins, a strange man who fights them (alone and without help) and a young shop-girl who’s been drawn inexorably into his orbit.  Although this is the second time that the Doctor’s left Rose behind, it’s inevitable that they’ll meet again – and already we’ve seen that they’ll make perfect travelling companions, as Rose appears to have little to keep her at home.  She obviously loves her mother (but is irritated by her at the same time) whilst her boyfriend is rather a dead loss.

This is one of the drawbacks of Rose.  It seems that the only way that Rose could be made such a strong character was by painting Mickey (Noel Clarke) as an ineffectual coward.  It really does him no favours at all, although later stories were able to redress the balance somewhat.

If the plot is gossamer thin (the Nestene Consciousness wishes to take over the world, because it can) it’s maybe inevitable this would happen, since establishing the main characters and the series format was the most important concern of story one.

In the end, it’s Rose that saves the day by rescuing the Doctor.  Did the Doctor actually need her help or was he subtly manipulating her?  It’s possible to view the scene in either way, but it’s true that once she has saved him, Rose feels more of a connection to the Doctor – which makes it more likely she’ll decide to accept his offer of travelling in the TARDIS.

Apat from the odd dodgy CGI effect, this has aged pretty well.  As the episode title suggests, Rose dominates and Billie Piper is pretty much perfect.  It’s a solid opener that didn’t attempt to be too ambitious and therefore gives the series a decent platform to build on. 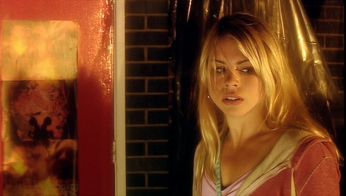