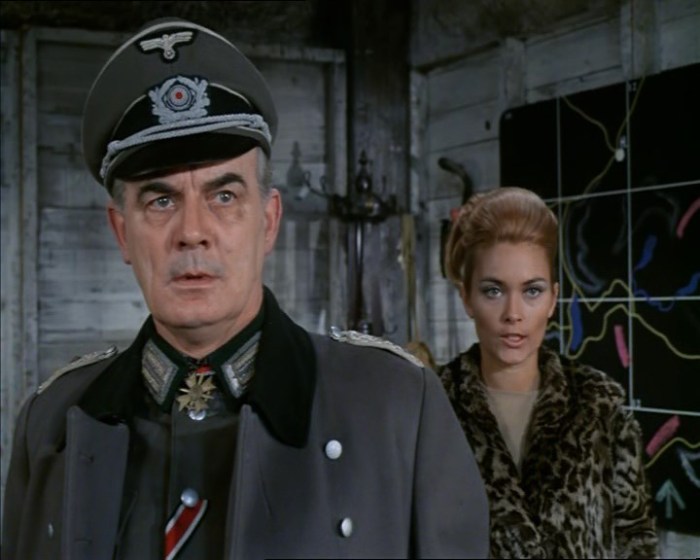 The death of three students in Austria catches the interest of Nemesis.  The locals believe that a nearby lake contains plundered Nazi loot, but when Richard and Craig investigate they find that the trail leads them to a cave and a madman intent on reversing the outcome of WW2 ….

Uh oh, the curse of the dodgy dubbing strikes again. In the opening scene my heart lifted when two very familiar faces – Donald Houston and Bernard Kay – appeared, but once Houston opened his mouth the spell was broken. Clearly it was felt that a German accent was beyond him, so he was given a little “assistance”.

Luckily a young Stephen Yardley was able to manage a credible Austrian accent (he plays one of the three students combing the lake for treasure) although he didn’t make it past the opening credits as Ritcher (Houston) machine-guns him and his two pals to a very sudden death.

Post credits, Sharron demonstrates her skills with a dart at a local village pub. It’s a rather strange little scene though, as it has a set up but then stops before any sort of pay off.

Our three heroes head out to Austria where they run into a shifty hotel keeper, Emil (Kay), who reacts with a start when he spies Sharron’s flippers (she wasn’t wearing them though, just carrying them). Thankfully Kay – always such a watchable actor – was allowed to keep his own voice. He doesn’t have much to do except cast shifty glances at Sharron, Craig and Richard but he still does that rather well.

Donald Houston was an actor I found it slightly harder to warm to. His performances could be quite variable (subtlety was never one of his strengths) so even undubbed he might have come across as a touch hammy (as he does throughout the episode when speaking with another actors voice).

Anyway, since only the boys go scuba diving, why was Sharron carrying their flippers? I have to confess that it would have been nice to see Sharron in a wetsuit ….

Ritchter and Emil are out hunting Richard and Craig by the lake. When Emil reacts in wonder at Richard’s gymnastic abilities (“he must have jumped at least thirty feet”) some suspension of belief is required, as what we see on-screen isn’t quite as impressive. Poor Emil then hits the dust (farewell Bernard Kay, it wasn’t much of a part but it was nice to see you).

A little over sixteen minutes in, there’s a lovely gag which tends to pop up in series of this era from time to time (it also occurred in an episode of The Rivals of Sherlock Holmes). The scene opens with a static shot of a snowy mountain range, only for the camera to pull away and reveal that it’s just a photograph at the entrance of the local mines! This has to be a deliberate tease (no doubt the audience would have both noted and appreciated this moment).

You have a love a story featuring ex-Nazis desperately longing to revive their golden years. It was a staple for many years (as late as 1988, the Doctor Who story Silver Nemesis was riffing on this theme) and The Survivors is a textbook example. Today’s prominent guest star, Clifford Evans, has a dual role – the nasty Nazi (Hans Reitz) and his mad brother (Colonel Reitz).

Sharron is sidelined for the early part of the story but springs into action when she karate chops Hans Reitz unconscious. It’s impossible not to notice the way she flings her coat over his head – that’s a handy trick to hide the fact that a stunt double has taken Evans’ place (fair enough though, you can’t really expect a senior actor to go flinging himself around).

Midway through the story it becomes obvious that something is hidden in the caves (which makes the red herring of the murdered students by the lake all the more baffling).  Mind you, that plot point seems quite sensible compared to the revelation that Colonel Reitz has been buried alive in the caves since 1945, growing madder and madder. Although since his uniform is spick and span and he’s clean shaven, he must have very decent washing and laundry facilities down there ….

This is a totally loopy concept, but you can’t help but love Evans’ full-throttle performance (just don’t think about the plot specifics too much). And just when you’re reeling from the revelations contained in a lengthy scene between Sharron and Colonel Reitz, we learn that the Colonel is the “good” German, buried alive by his evil Nazi brother who’s been waiting twenty five years for him and all the other troops also trapped with him to die off, so he can utilise the cache of weapons buried with them.

Crumbs. For the sheer chutzpah it took to create such a plot you have to tip your hat to Donald James. Utterly bonkers it may be, but I’ll give The Survivors an indulgent four out of five. 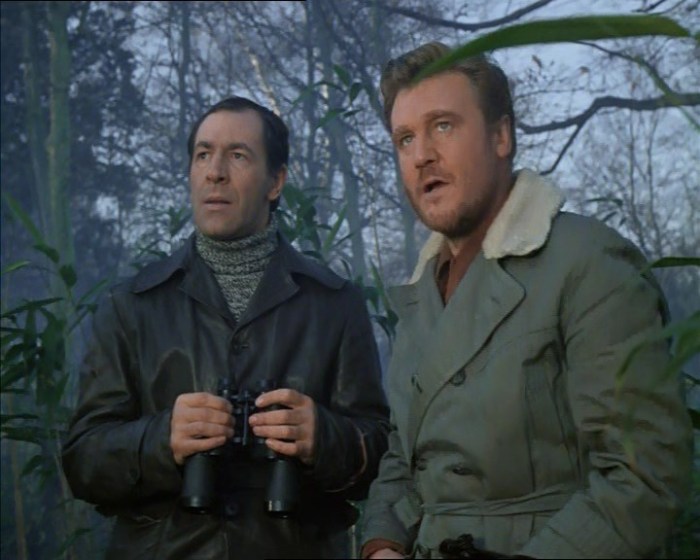 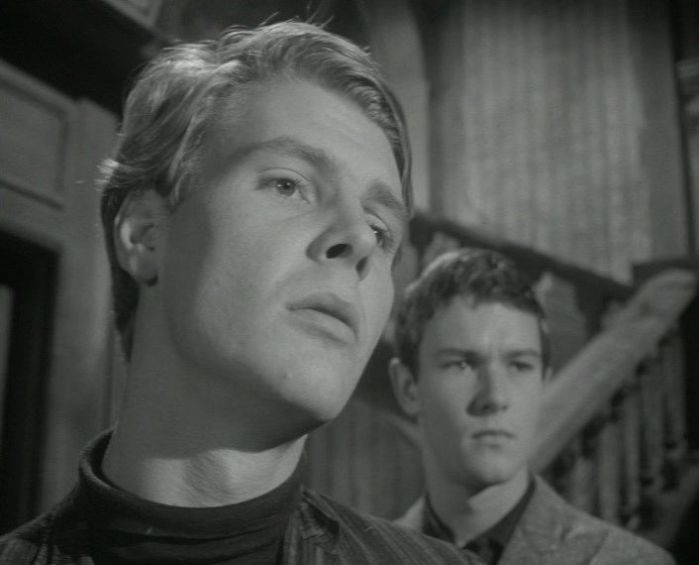 The scene is a Paris cafe.  Paul (James Fox), Jacques (David Buck) and Nicole (Heather Fleming) are three young people who react with scorn and disfavour at the news that France now has atomic capability.  Their vocal disapproval catches the attention of two soldiers and, after a few choice insults are exchanged, a fight ensues.

The three friends manage to make their escape, aided by a young American called Bob (Michael Anderson Jr).  Bob quickly becomes friendly with them and they decide – spurred on by the intense Paul – to try and reason with France’s top nuclear scientist, Professor P.J. Moreau (Clifford Evans).  But Paul has a hidden agenda of his own ….

From the outset it’s plain that Paul is the driving force.  The others, especially the affable Bob, are simply caught in his orbit.  Bob reacts with unease when Paul abducts Moreau from his flat at gunpoint, although Nicole seems quite calm about it.  She tells Bob that whilst she didn’t know Paul had a gun, nothing he does surprises her.  Yet this may not be the strict truth as she later backtracks a little.

Moreau is taken to a deserted house where’s he forced to watch a film documenting the human suffering inflicated by the atomic bombs dropped on Japan in 1945.  This footage, albiet brief, lingers in the memory, although it doesn’t seem to have the desired effect on Moreau.  Possibly Paul was expecting the Professor to be repulsed, but he calmly tells them that “I spent two months in Hiroshima and believe me these pictures only give a second-hand idea of the effects of gamma radiation on the human body.” He begins to explain about the devastating effects of the blast, but is cut short by Paul, no doubt irritated that he’s no longer in control.

Moreau is summed up by Bob as having a mind like a steel trap.  The American sees no point in hanging onto him since his views (France must have the bomb, since others have it) appears to be inflexible.   But Paul, who was his star pupil, professes to know him better.  “He’s full of specious arguments and he doesn’t believe any of them.”

Whilst the British actors playing Chinese characters in The Dragon Slayer seemed to be careful to speak in their own normal tones, there’s no such rule in place in this episode as ripe French accents are the order of the day.  James Fox, under his real name William Fox, had been a child star in the early 1950’s, and his role here was a fairly early one in his adult career.  Paul is a simmering mass of resentment from the off and – as various revelations are made – he becomes more and more frayed around the edges.   It’s a fairly unsubtle turn, but Fox is still very watchable.

The, forgive the pun, power game between Paul and Moreau is at the centre of the story.  Paul blames Moreau for the fact that his father (also a scientist) died in disgrace, but Moreau is adamant that Paul’s father was a Nazi colloborator.  Paul reacts angrily to this and presses on with his plan to force Moreau to resign.

Essentially a five-hander, To The Very End is a claustrophobic tale.  There’s space for a debate on the rights and wrongs of atomic weapons, but the suspicion that Paul is simply out for revenge also means there’s a conventional crime-story feel.  It’s fair to say that it does lack a little suspense or tension – as the kidnappers (even Paul) seem misguided rather than fanatical and Moreau, puffing away contentedly on his cigarettes, doesn’t spend a great deal being treated as a prisoner.

But is there a twist in the tale? Their plans come to naught, so Paul decides to kill Moreau.  The final scene between Fox and Evans is played at an intense pitch (cross-cutting between close-ups of the two actors).   The resolution probably won’t come as a surprise, but it feels like the right decision. A fairly low-key entry then, but Fox and Evans do their best to raise the stakes.