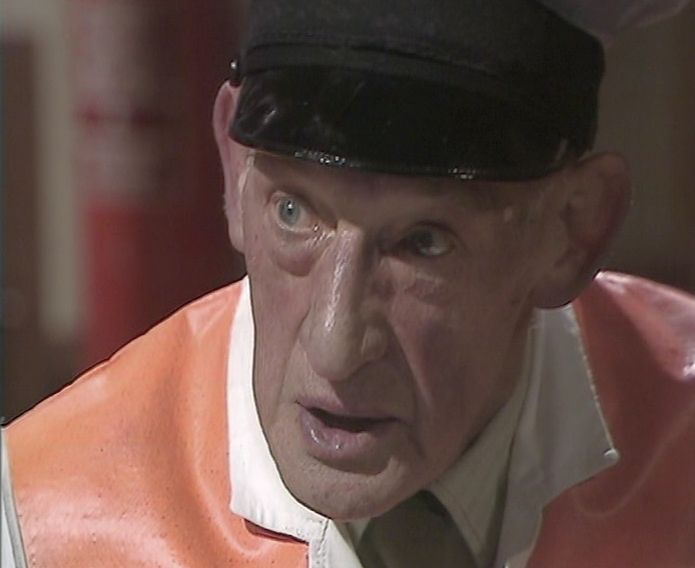 Issy Smethurst (John Barrett) is an elderly, set in his ways, lollipop man. Many passing motorists catch his ire, but none more so than Ted Galway (Alan Lake). Galway, a flashy self made man, represents everything that Issy despises. And when Galway buys the factory where Issy works part time (tending the engines) it only serves to deepen their feud ….

The character conflict between Galway and Issy is at the heart of the episode. Issy stands for tradition and continuity – although the engines he so lovingly tends (when he’s not harassing passing motorists) are contained within an eerily quiet factory. Once it was a thriving hub of activity, but now it stands idle. The current owner explains that it’s simply not cost effective to keep it running. When a smaller plant space, with newer equipment, can turn out more textiles at a cheaper cost and with far less manpower, the economic argument for its closure is strong.

The facts don’t concern Issy though. For him, it represents a lifetime of toil (he recalls how he first arrived at the factory, as a seventeen year old). To see those engines broken up – which seems likely after Galway (via proxy) buys the place – is heart-breaking for him.

Ted Galway is Issy’s complete opposite. Having disappeared to London for a few years, he returned as a self made man of considerable means. Now he owns the flashiest house in the neighbourhood (complete with a swimming pool and a snooker room), runs with the local hunt and numbers several high-ranking police officers – such as DCI Logan – amongst his friends.

Logan gently suggests to Jean that Issy needs to be warned against bothering Galway in the future. That Logan’s never even considered the possibility that Galway might be crooked seems barely credible (Logan seems to have swallowed Galway’s story that he made his fortune in a London casino hook line and sinker). Issy might be motivated (in part) by spite, but he’s plainly right when he claims that Galway’s crooked.

Although it might be expected that Issy would be the audience identification figure, there’s also something about Galway which incites a certain sympathy. This is no doubt down to Alan Lake, who manages to make Galway a curiously vulnerable figure.

There’s something ever so slightly pathetic about Galway’s delight in the trappings of his success. From his Rolls Royce (complete with an eight track cartridge system!) to the fact that he now hob nobs with all the local worthies, he leads a comfortable and law-abiding existence. So the arrival of Walter Hancock (Antony Carrick) who’s come up from the smoke is an unwelcome one – since Hancock forces him back into a life of crime.

Galway would like nothing more than to be left alone, but he owes some powerful people some favours, so has no alternative but to get involved in a furs robbery. Which happens to be observed by Issy – who by this point is keeping Galway under constant surveillance!

There are some fascinating incidental details in this story – one which stood out for me is Jean’s assertion that Hancock may very well be a criminal since he has tattooed arms. Today, tattoos are commonplace, but rewind nearly forty years and it’s plain that they were far less socially acceptable. The way we observe how Galway has moved upwards (he likes to indulge in dinner parties with jugged hare, after dinner mints and cigars) is another lovely touch.

Trouble At T’Mill possibly doesn’t show Hartley’s police force at their finest, since it’s Issy who does all the work for them. This is something that annoys Joe immensely – if Issy was a nuisance before, imagine what he’s going to be like now he’s been proved right ….

John Barrett’s a little shaky on his lines from time to time, but considering that he’s got the largest role in the episode that’s possibly not too surprising. Issy’s gifted several nice monologues and shares some decent two-handed scenes with Jean. Knowing about Alan Lake’s untimely death, it can’t help but make his later television appearances (such as this one) seem very bittersweet. Ted Galway is a fine creation – with Lake deftly shading in the nuances of his fluctuating character very well.

Lake would go on to appear in another two Juliet Bravo episodes playing different characters as would Christine Hargreaves who in this one plays Galway’s wife, Vera. You might have expected that Galway would have found himself a young, trophy wife, but not so – Vera is middle-aged and running a little to seed (and whilst Galway has assimilated himself amongst the upper echelons, Vera has remained resolutely working-class). With a cigarette never far from her lips, she seems somewhat out of place in their palatial home. Hargreaves who, like Lake, would pass away in the mid eighties, is probably best known for being one of the original cast members of Coronation Street.

Trouble At T’Mill is low on crime, but high on character conflict and is yet another strong episode from the early part of the first series.