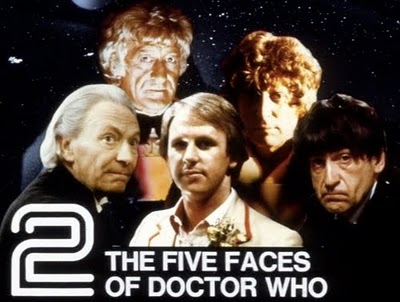 It’s a little staggering to realise that The Five Faces of Doctor Who repeat season began airing in early November 1981.  Thirty five years, where has the time gone?

Back then, the eighteen year old An Unearthly Child and even The Krotons (a mere thirteen years old) seemed like relics from a different age.  The flickery black and white telerecordings had a lot to do with that of course, the lack of colour made them appear much older than they actually were.  But it’s still more than a little strange that Survival seems like a much more current story today than An Unearthly Child did then, despite the fact that Survival is a whopping twenty seven years old.  Funny thing time …..

If you weren’t there, it’s difficult to describe just how important The Five Faces of Doctor Who was.  Old Doctor Who didn’t get repeated and the first commercially available story wouldn’t hit the shelves until 1983.  So if you wanted to get a feel for pre-Baker Doctor Who then your options were rather limited – Target novelisations were your best bet, although there were also the World Distributors annuals (even if their vision of the Doctor Who universe was idiosyncratic, to put it kindly).

Factual information could be gleaned from Doctor Who Weekly and Doctor Who Monthly, whilst a small handful of books – The Making of Doctor Who, The Doctor Who Monster Book – also offered tantalising glimpses of these “lost” stories.  After all, back then we weren’t concerned about the stories which were actually missing from the archives, everything from the past was as good as lost to us.

And then in early November 1981 we had the chance to see how it all started.  I’ve written here about how I view An Unearthly Child today, rewinding thirty five years I’m pretty sure I was just as taken with it then.  Three episodes of caveman antics might not be to everyone’s tastes, but the grime and despair of those episodes fitted perfectly with the dark winter evenings in 1981 (just as they would have done in 1963).  I loved it then and I love it now and I know I always will.

The Krotons had a bit of a bumpier ride.  My ten-year-old self found the story a little thin, but Troughton (like Hartnell) impressed right from the start.  It’s a story I’ve grown to appreciate a little more over the years, as it’s perfect undemanding fare.  And the lovely Wendy Padbury wears a very short skirt, which is nice.

If the internet had existed in 1981 then no doubt it would have gone into meltdown after Carnival of Monsters and The Three Doctors were broadcast the wrong way round.  Carnival, thanks to Vorg and Shirna, looked a little odd back then, and it would take a few more watches before the cleverness of Robert Holmes’ script became clear to me.  The Three Doctors is good fun, nothing more, nothing less.  It was nice to see the Brig in action for the first time though, even if I’d later realise we weren’t really seeing him at his best here.

Logopolis was an obvious choice, as Castrovalva was less than a month away from broadcast (and since it featured Davison’s sole appearance to date, if they hadn’t shown this one then the Five Faces tag wouldn’t have worked).  Since it was a current story it rather lacked the “wow” feeling of the others, but in the pre-VHS age, “another chance to see” was always welcome and following this broadcast I wouldn’t see it again for nearly a decade (a pirate copy came my way in the late eighties).

I’m off to recreate those winter evenings from 1981 with a rewatch over the next few weeks of those five serials – splendid stories, all of them.

And so after seven long years it all came to an end on a set cobbled together from leftover pieces from The Hitchhiker’s Guide to the Galaxy and Top of the Pops.

Tom Baker still casts a long shadow over Doctor Who – he was voted No 1 in the DWM 2014 poll which is a fair indication that his support amongst older fans remains secure whilst many younger ones have also succumbed to his charms. If there’s one certainly, it’s that in five or ten years time Matt Smith will have slipped from the No 2 position but Tom Baker seems indomitable at No 1, ready to outsit eternity you might say.

Is Logopolis a good story to bow out on? Yes, pretty much. It’s by no means perfect, but it does give Tom some good moments whilst also moving into place the line-up that would accompany Peter Davison through S19.

Introduced in this story is Tegan (Janet Fielding). An unwilling traveler at first, to put it mildly, Tegan would take several stories (probably until Kinda) before she really settled in.  In Logopolis, this may be partly be because she’s much more broadly Australian than later on, when her accent is notably toned down, or it could be that from Kinda onwards she was simply a better written character.

Like Adric and Nyssa, Tegan joins the Doctor after a close relative is murdered – coincidence or a definite story plan, I wonder?

Both Nyssa and Tegan have lost loved ones at the hands of the Master who makes a full appearance here, in the guise of Anthony Ainley, following his brief appearance at the end of The Keeper of Traken.

Christopher H. Bidmead seemed to hold the opinion that the Delgado Master simply wasn’t evil enough, so the Ainley Master has notably less charm than the Delgado incarnation.  But this does seem to fundamentally misunderstand the role of the Master during the Pertwee era.

Whether by accident or design, Pertwee’s Doctor largely ended up as a moral, rather humourless figure, so Delgado’s Master was allowed to have all the charm and wit that the Third Doctor rarely showed.  Remove this aspect from the Master and there’s little left.  But the Doctor and the Master do enjoy a little byplay in Logopolis, such as this scene –

MASTER: The Pharos computer room.
DOCTOR: Yes. I envy you your TARDIS, Master.
MASTER: Excellent, Doctor. Envy is the beginning of all true greatness.
DOCTOR: Shush.
(A technician returns to the room. The Master points a device at him. The Doctor snatches it away.)
DOCTOR: No!
MASTER: It’s the lightspeed overdrive, Doctor. You’ll need that to accelerate the signal from the transmitter.
DOCTOR: I’m so sorry. I thought you meant to shoot him.
MASTER: Oh, Doctor. You can explain.
DOCTOR: Yes.
DOCTOR: Ahem. Good morning. Good evening.
(The Doctor notices the Master now has a weapon in his hand and drags the technician’s chair aside before the Master can fire)
DOCTOR: He’s unconscious.
MASTER: Never mind. I feel we’ve been spared a very difficult conversation.

The return of the Master wasn’t the only link to the Pertwee era.  Possibly it was the influence of Barry Letts as executive producer that saw several lifts from Third Doctor stories (the radio telescope as seen in Terror of the Autons and the Master’s TARDIS inside the Doctor’s TARDIS from The Time Monster).

Barry Letts was also on hand to read the scripts and offer his advice, although often it wasn’t taken.  He wasn’t happy, for example, with the Master’s line that although Tremas was dead his body remained useful, feeling that the concept of an animated corpse was rather disturbing.  He also queried the rather large plot hole concerning the lash-up job that the Doctor and the Master made at the Pharos Project to save the Universe.

What would happen to the Universe, asked Letts, if the Pharos Project switched it off?  This is quietly forgotten at the end of the story and the impact of the imminent death of the Universe is rather swept under the carpet.

Letts also disliked the concept of the Master broadcasting his threats to the entire Universe.  How, he reasoned, could they respond?  Still, he wasn’t alone in pointing out how idiotic that was!

But whilst the script does feel somewhat bitty in places, there is a definite sense of impending doom as the Doctor finds himself shadowed at every turn by the Watcher.  And despite the end taking place in a hastily cobbled together set made from bits and pieces from other programmes, it’s a sequence that still (particularly for those of a certain age) resonates today.

Doctor Who would go on, but Tom Baker would be a very hard act to follow.