Skip to content
HomePosts tagged 'man in a suitcase' 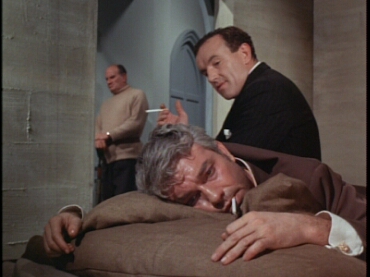 McGill is lured into a trap by Colonel Davies (Howard Marion-Crawford) and his associate John (Colin Blakely).  Davies was, until 1958, the white leader of an African nation called Iquala.  Following a coup he was ousted and remains a bitter man.  He knows that McGill, at the time working for American intelligence, was present in Iquala and wants him to sign a confession confirming that the coup was organised by American and British intelligence. McGill proves to be a tough nut to crack though ……

Brainwash features a character that wasn’t an uncommon one for ITC adventure series of the time.  Variations of Colonel Davies can be found in series such as Danger Man and The Saint – men who don’t realise that their time has passed and that the days of the British empire are long over.  When Davies asks McGill what he believes Iquala now stands for, he’s far from impressed by the American’s reply of “democracy”.

Whether McGill was involved in an American plot to oust Davies is irrelevant – we know that McGill will never betray his people by signing the confession (even though they abandoned him) and it’s also plain that Davies is little more than a tired (and sick) man.

John’s motivations remain nebulous for a while.  Although nominally subservient, he clearly sees himself as the power behind the throne.  He also enjoys his work – John is a sadist and delights in attempting to push McGill over the edge by whatever means necessary (drugs, sleep deprivation, etc).  At one point he discusses how, back in the old days, his methods of gaining information were much cruder but just as effective.  He then provides us with the statement used so often during the decades – he was only ever obeying Davies’ orders.

The other main character is Judy (Suzan Farmer).  Initially presented as little more than a maid, it’s later revealed that she’s Davies’ daughter.  She clearly loves her father, but is conflicted when she sees how McGill is suffering.  As for McGill, he regards her as a possible way out and threatens to kill her.  In a key scene, he strangles her whilst John looks on, amused, from a hidden observation point.  This poses several questions – would McGill really have killed her or was John right when he later told Davies that Judy was never in danger?  It’s very possible to believe that John would have been happy to sit and watch McGill murder the girl.  And it’s also notable that few other ITC stars would have acted in such a brutal manner.

As for McGill, he’s put through the wringer as the episode proceeds and Bradford is typically good at showing McGill’s gradual disintegration (as he becomes unkempt, sweaty, bruised and blooded).  The eventual revelation – that the dying Davies wants to be murdered by McGill and become a martyr – is a decent twist which confirms just how deluded the former leader of Iquala has become.  And for McGill there’s no particular victory, he’s just content to stagger away still alive.

2016 has been a wretched year so far for losing people from the era of television that I love and the death of Richard Bradford (1934-2016) is yet another sad passing.

Probably best known for Man in a Suitcase, Bradford’s American method acting might not always have won him friends amongst some of his fellow crewmembers, but it certainly helped to elevate what would otherwise have been a rather standard ITC adventure series.

But thanks to Bradford’s insistence of throwing punches for real and looking like he was actually suffering, the series stood apart from its contemporaries.

So time to dig out the DVD to spin an episode in tribute.  RIP.