Lady Alex Lindo-Parker (Ophelia Lovibond) works as a curator at the British Museum, but she’d much rather be looking for treasure out in the field.  So that’s what she does, heading to the Amazon in search of El Dorado, the legendary lost city of gold.  En-route she runs into the rugged American adventurer Hooten (Michael Landes) and as might be expected, sparks fly ….

Unashamedly retro in tone, Hooten & the Lady offers no surprises at all, but that’s not unexpected with genre television (or indeed, television in general – how many bleak police procedurals have there been during the past few years?).  H&tL is a heady brew, mixing elements from Indiana Jones, Romancing the Stone, Tomb Raider and the short-lived series Relic Hunter to produce a brash swashbuckling adventure series of the sort that’s rarely seen today.

The love/hate relationship between Alex and Hooten is such a familiar one (complete opposites who end up with a grudging respect for each other) that it immediately begs the “will they, won’t they?” question.  Interestingly, co-creator Tony Jordan (Hustle) has already been at pains to point out that no, they won’t. “I think it’s lazy to have a male and a female and just do, ‘When will they shag?’ We’ve seen it, hundreds of times.  Alex and Hooten have a very different bond – they want to spend time together, but it doesn’t have to be that they want to get into each other’s pants.”

Clearly the series has a healthy budget, as Hooten and Alex’s globe-trotting exploits are mostly filmed on location (Rome, Moscow, Cambodia and Namibia amongst others).  This adds a considerable sheen to proceedings and it also means that even if the story isn’t particularly original you can just goggle at the scenery instead.

The series’ hyper-reality is evident from the first few moments of the debut episode The Amazon. Alex might be an office-bound expert, but she has little difficulty in convincing her employers that she’s quite capable of taking a quick trip up the Amazon and returning in six weeks time with some precious artifacts which will add considerable lustre to the Museum’s reputation. And (off-screen) everything seems to be going swimmingly as she makes contact with the Yuruti tribe. But then Hooten comes blundering in and things take a turn for the worse.

Hooten’s introduction comes via a diamond trade with a couple of shady types. You get the sense it’s not going to be his day when he pulls out a knife to confront one of the heavies, only for his opponent to brandish something much larger! Within a short space of time both Hooten and Alex find themselves tied up by the Yuruiti and facing very different fates.

Alex spells it out. “They’re going to stake me over that fire-ant’s nest. It’s their standard punishment for errant women. ” And what about Hooten? He’s going to be smeared in monkey blood and sent into the chief’s hut for sex. But there’s one way out – if Hooten can defeat their mghtest warrior then they’ll be set free.

This opening is a perfect mission statement and it has to be said that the nicely shot action sequence (as they escape from the angry tribe and sail away to safety down the Amazon) looks very impressive. Tony Jordan’s script zings along very nicely and both Lovibond and Landes make an immediate impression. It’s also fair to say that Lovibond looks incredibly cute in her sweaty top (others may enjoy the clothes-less Landes shots at the end).

Jane Seymour guests in Rome as Alex’s mother, making the first of three appearances. Naturally, Hooten runs into her without realising who her daughter is (coincidence, eh?) Hooten needs Alex’s help in tracking down the mythical Sibylline books and it’s not long before they find themselves running into the Mafia and tangling with a sewer alligator. If this one has a fairly low-key feel (although the alligator scene is good fun) then the final few minutes – as Hooten attempts to extricate Alex and her mother from the Mafia – is pretty arresting.

Hooten’s unique approach to archeology (explosives and a fork-lift truck) is put to good use in the pre-credits of Egypt. It’s one of a number of episode highlights, which also includes a classic bar-room brawl as Hooten and a new lady-friend, Melina (Angel Coulby), are forced to beat a hasty retreat after a dice game goes badly wrong. But even better than this is the following scene – their attempts to become intimately acquainted are scuppered by Alex, who is lurking in Hooten’s hotel room, waiting patiently for him to return. She then claims to be his wife, which rather puts a dampner on things!

Of course there’s more to Melina than meets the eye (it wasn’t Hooten’s rugged good looks that attracted her, rather it was a priceless artifact he’d recently “acquired”) and she later returns with a blowtorch for some friendly persuasion. Alex also comes back (Lovibond looking rather fetching in a pair of pyjamas) and the ensuing catfight between her and Melina is another standout moment. The stunning Egyptian location filming isn’t too shabby either. 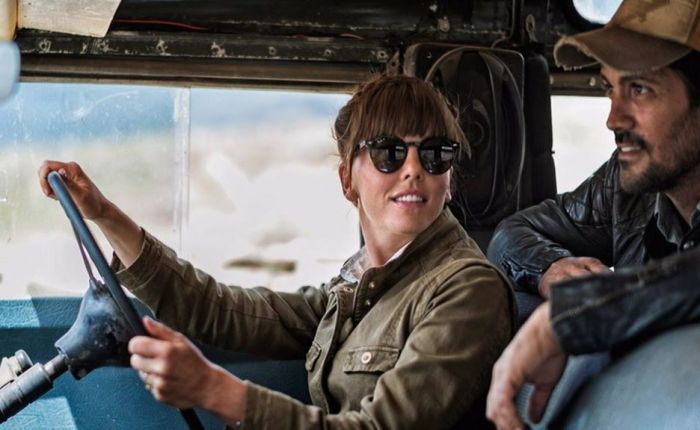 More impressive location work can be seen in Bhutan as Alex and Hooten search for a scroll that may have been written by Budhha himself. We also get our first glimpse of Alex’s fiancee, Edward (Jonathan Bailey) and Hooten is allowed some quieter character moments as Kapila (a local woman who may hold the key to the scroll’s location) seems to be able to see deep within his soul. “You lost someone? But you still feel the pain. In there, inside, it burns. When you have known love, you know that nothing dies. It just goes to another place.”

Up until now, Jessica Hynes and Shaun Parkes (as Ella Bond and Clive Stephenson) have had fairly thankless roles. Ella and Clive are Alex’s colleagues at the British Museum, largely existing in order to push the plot forward when some exposition is required. But in episode five, Ethopia, Ella finds herself captured by Ethopian bandits, which means that Alex is forced to steal a precious artifact in order to secure her release. I love Hooten’s reaction when he sees what it is. “That’s a spoon. She’s being held ransom for a spoon?” It’s a very large spoon though ….

Anton Lesser appears in Moscow as Hercules Rudin, “the finest of thieves” and the man who taught Hooten all he knows. He may not be a household name, but Lesser’s film, television and radio credits are highly impressive, which means that he provides a touch of class during his brief appearance as Hooten’s mentor. Olivia Grant as Valerya, a leather-clad rogue Russian archeologist who has a history with Alex, also catches the eye (she appears to have modelled her look on Emma Peel). The pair come to blows at a Russian wedding party where – to Alex’s amazement – Valerya pulls out a miniature crossbow from her handbag and starts to track her prey (i.e. Alex).

The opening of Cambodia finds Hooten and his new friend Jian (Jay Heyman) deep in Indiana Jones territory – complete with precious jewels that bestoe immortality and traps which snare the unwary. Hooten and Alex, following the events in the previous episode, have been somewhat estranged but you can’t keep a good woman down and Alex (to Hooten’s less than total delight) pops up to see what he’s up to. It’s been bubbling away for the last few episodes, but Hooten’s quest for revenge against the man who murdered his family comes to a head. The man now has a name – Kane (Vincent Regan) – and he casts a menacing shadow over proceedings

The series finale – The Caribbean – finds Hooten and Alex on the trail of the lost treasure of a notorious pirate called Captain Henry Morgan. The hunt for pirate treasure is rather irresistible (although Alex puts a slight dampner on things by stating that, strictly speaking, Morgan was a privateer, not a pirate).  After Alex declares that a chicken is cleverer than Hooten, they decide to search for the treasure independently.  It may not come as too much of a shock to learn that they eventually bump into each other though ….

Brief making-of featurettes for all eight episodes (each running for approx nine minutes) are included on the two discs. They’re fairly breezy and lightweight, but it’s nice to have them anyway. Both discs also feature picture galleries.

Hooten and the Lady is a wonderful romp . With two excellent leads, more stunning location work than you can shake a stick at and some nicely executed stunts, it’s a treat from start to finish.