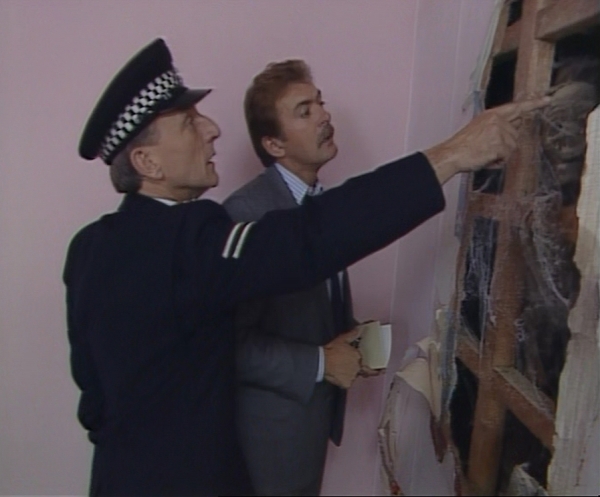 Between 1988 and 2004, P.J. Hammond wrote 39 episodes of The Bill. Given that his unique style is very noticeable on series such as Z Cars and Angels, I’ve decided to review his contribution to The Bill, looking to see how he worked with this format and if he ever attempted to stretch it in unexpected directions.

Requiem was one of the early half hour episodes (number fourteen). Even with the reduced running time, some writers still juggled multiple plotlines, usually with one emerging as the dominant theme. Hammond eschews this – instead the focus stays fixed on the grisly discovery inside a nondescript house.

What’s actually been discovered is teased for a few minutes. Haynes emerges from the house slightly shaken and advises Ramsey to go and take a look. The camera stays fixed on Ramsey when he goes inside, so we only see his reaction (the same thing happens when Cryer turns up a few minutes later). Indeed, it’s not until Roach and Dashwood roll up that the reveal finally takes place. Whether this works is debatable, as the object of their interest (a skeleton hidden behind a wall) does look a little fake.

Mr and Mrs Trant and their young daughter have lived in the house for about five years. Doing some DIY (smashing through the living room wall to install a fireplace) Mr Trant came across this unexpected guest. Both Mr and Mrs Trant seem rather disconnected from events – remaining unemotional throughout, they cast a rather odd atmosphere over the episode (the moment when father, mother and daughter all sit down in unison catches the eye).

Requiem features a few familiar faces guest-starring. One of Ronald Leigh-Hunt’s final television roles saw him cast as the pathologist Passmore. Cryer and Roach, discussing Passmore’s imminent arrival, express amazement that he’s still working, which primes the audience to expect someone rather doddery and incompetent.  The reality is quite different though – Passmore is sharp and methodical, although clearly of the old school (scowling at the flippant remarks made by his photographer colleague, for example).

Russell Dixon and Deila Linsday both sketch decent cameos as Mr and Mrs Jenner. Neighbours of the Trants, they have a marriage which is best described as voluble and volatile, although there’s the odd streak of affection visible too. They add little to the plot, but help to briefly lighten and humanise the tone of the story.

Since there’s a body, it seems reasonable to suggest there must be a miscreant somewhere at hand. The Trants can be ruled out, as the events behind the wall took place long before they bought the house. Talk turns to the reclusive Goodhall (Richard Beale), a resident of one of the upper flats, who seems a likely candidate. Another veteran actor, Beale makes the most of his few minutes’ screentime.

Goodhall turns out to be a red herring as the true resolution of the mystery is revealed in the final few minutes. It seems slightly hard to swallow, but I daresay even odder things have happened in real life.