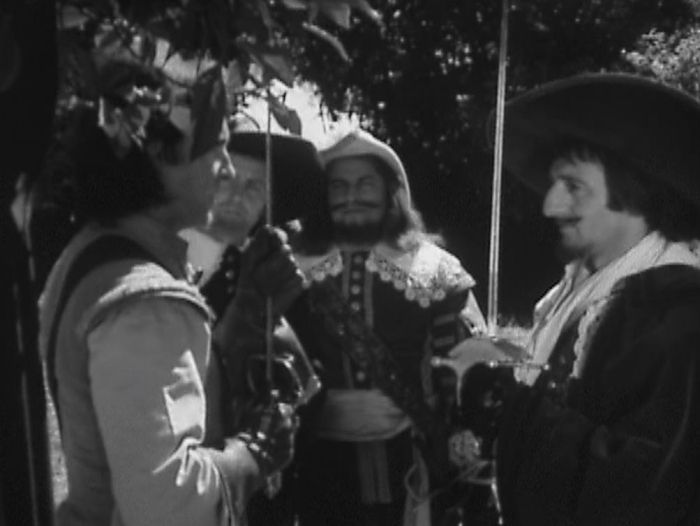 Although we open episode two with D’Artagnan facing the prospect of dueling with all three Musketeers, it doesn’t take too long before he’s accepted by them and Brett gets to utter the immortal line “one for all and all for one.” Cue another fight scene shot on film with more highly dramatic music. It’s interesting to note that Hammond seemed to have the use of a crane, as there’s a couple of very high shots which gives the scene a little lift.

The three Musketeers and D’Artagnan enjoy their tussle with the Cardinal’s men which then leads us into our first sight of Cardinal Richelieu (Richard Pascoe). Pascoe is another strong performer, exuding quiet menace in his meeting with Brayshaw’s Rochefort.

The Queen (Carole Potter) has a low opinion of the Cardinal. “That man of God who wears the face of Lucifer. A priest who in his lust for power once dreamt of making France’s Queen his mistress. His passion filled me with disgust and I so scorned him that his breast cannot contain the hatred he now bears me.”

Potter emotes freely as the Queen struggles to free herself from the trap she knows Richelieu has set for her (he hopes to make capital out of her relationship with the Duke of Buckingham, an English noble). This is an early example of the two main parts of the serial – there’s derring do and fights aplenty, but inbetween the action the pace slows down as lengthy dialogue scenes dominate. Carole Potter’s television cv isn’t particularly extensive. She returned as Queen Anne in The Further Adventures of the Musketeers the following year and the year after that appeared as Violet Smith in the Sherlock Holmes story The Solitary Cyclist (one of the episodes from the Peter Cushing series that’s sadly wiped). Like Brett’s early scenes as D’Artagnan, she seems a stranger to subtlety as she wails about her misfortunes to her trusted servant Madame Constance Bonacieux (Kathleen Breck).

The long arm of coincidence is in operation after D’Artagnan rents a comfortable room from Madame Bonacieux’s husband (played by the always reliable Paul Whitsun-Jones). With the Queen in trouble and Madame Bonacieux her only confidant, it seems plain that it won’t be long before she and D’Artagnan meet (within a matter of minutes as it happens). D’Artagnan observes her enter through a loose floorboard and Breck rather unsubtly demonstrates Madame Bonacieux’s distress by placing both hands over her face in a very exaggerated manner. After the Cardinal’s men catches up with her, Breck starts wailing very loudly, but luckily for those with sensitive ears D’Artagnan is on hand and makes quick work of them.

Afterwards, D’Artagnan and Madame Bonacieux regard each other for the first time and it’s clear that he likes what he sees ….