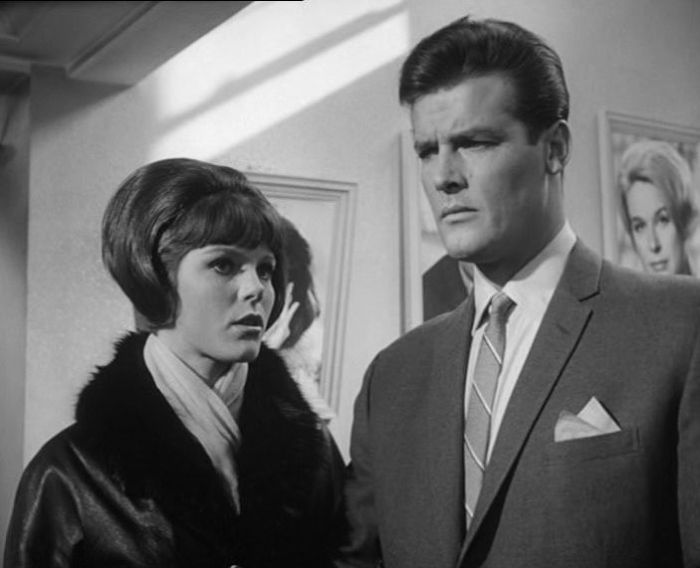 Simon is mourning the death of Marcia Landon, famous film star, who took her own life after being disfigured in an acid attack.  Rising starlet Claire Avery (Samantha Eggar) has taken over the role Marcia was due to play in an upcoming film and after receiving a threatening letter – stating that unless she hands over five thousand pounds she too will be disfigured – calls on Simon for help.  So the Saint finds himself with a film studio full of suspects to investigate …..

The pre-credits sequence has a bleakness which wasn’t typical for the series, as we see Simon pay Marcia a fullsome eulogy.  Her face – prior to the attack – is prominently displayed both in the newspapers and on the studio walls where Simon has called to see Claire (and Marcia’s image will continue to appear throughout the episode).  The attack is shown in flashback – shot from distance and mostly using shadows, it’s effectively moody (and also isn’t explicit – which was always a consideration).

It’s a cliché but Samantha Eggar – just like Claire Avery – has undeniable star quality.  Director John Krish favours close-ups in the early part of the episode – as Claire and Simon chat about Marcia – and these shots, along with Eggar’s low, breathy voice helps to create a considerable impression.  The camera loves her and, to be honest, so do I.

Johnny Briggs creates an immediate impression as the chirpy runner, Johnny Desmond – he’s an upbeat sort of chap, always ready with a bad joke.  Marion Mathie, later to be the third and final television She Who Must Be Obeyed in Rumpole of the Bailey, is another familiar face who pops up (she plays Sheila – wife of Mike Sentinal, the director).

Jill Melford is deliciously bitchy as Irene Cromwell, an older actress who clearly believes that she should have been given Marcia’s role.  Dripping with honey-tongued venom, she’s highly entertaining.  Mix in Tony Beckley as Claire’s very disgruntled co-star and Philip Stone as a dogged police inspector and it’s hard to see how this story could have been better cast.

What’s nice about this one is that it gives us a rare chance to look behind the scenes at the studios where The Saint was shot.  It’s nowhere as self-reverential as some of the later UFO episodes, but it’s still interesting (and I daresay since it was pretty cheap to shoot, it would have pleased the producers).

As the story progresses, Claire continues to stress.  Things come to a head when a prop gun, used in the recording of the film, is substituted for a real one.  Simon, standing off-camera, shouts “drop that gun and nobody move!” in an incredibly forceful way (very uncharacteristic) whilst Claire just screams.  Oddly, she does so after the shot’s been fired (she appears to be working on a slight delay).  John Krish doesn’t really do Eggar any favours by zooming into her screaming mouth – it’s an arresting image, but not terribly flattering.

Towards the end of the episode, there’s a chance to see even more of the studio as Simon pursues a mysterious stranger through its various nooks and crannies.  This might be little more than padding, but it’s shot so well that it’s hard not to enjoy it.  Indeed, that sums up the story as a whole.  The mystery is fairly slight, but with such a strong cast it’s easy to be totally absorbed.

The use of Marcia’s photograph is an especially memorable touch.  It’s seen so often, in various different locations, that it’s almost like she’s always present – albeit as a passive, non-speaking observer.  This is one of the reasons why Marcia is a fascinating story which rates four and a half halos out of five. 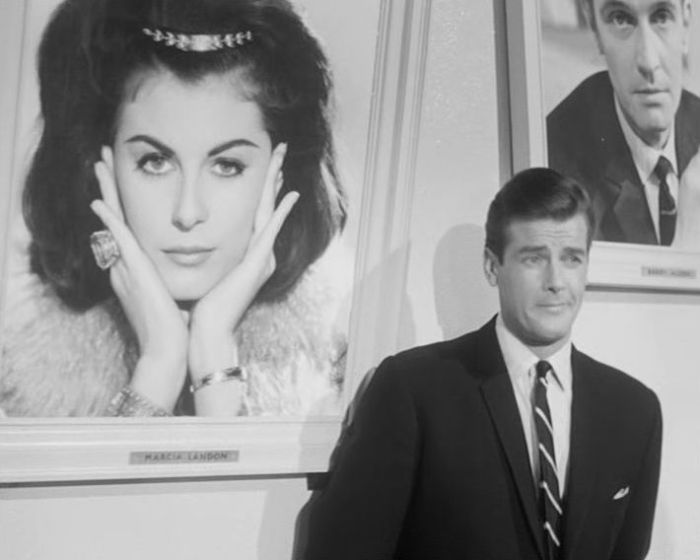